New DVD from Shira Girls Choir: Shira on the Road 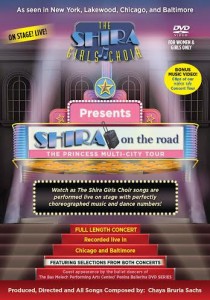 For women and girls only!!

You’ve heard their voices. You’ve enjoyed their songs. Now for the first time ever see them in action on DVD! It’s The Shira Girls Choir and they have been thrilling audiences ever since their first album Yisimeich Elokim burst forth upon the Jewish women’s music market. And now with their two latest albums, Lechu V’nailcha and Princess having been released over the past few years, the Shira Girls Choir presents its first DVD, Shira on the Road, recorded live on stage during their concert tour!

Watch as your favorite Shira Girls Choir musical numbers are brought to life on stage in the Princess Multi-City Tour with dazzling costumes, perfectly synced dancing and choreography and of course the stunning voices that have characterized the choir throughout the years. This DVD includes the entire full length concert featuring selections from both the Chicago and Baltimore show as well as a bonus music video featuring clips from the choir’s previous Lechu V’nailcha concert tour. You’ll enjoy the guest appearance by the adorable little ballerina’s of The Bas Melech Performing Arts Center/ Penina Ballerina DVD’s. The underlying message of the Princess song acted out on stage, as well as the skit preceeding the song, pertains to every Jewish girl across the globe. Soar through the sights and scenes of Yerushalayim together with the choir during the combined Yerushalayim slide show and song. The coordinated efforts of Choir Director Chaya Bruria Sachs and longtime Shira Girls Choir Dance Coach Leah Eichenthal is palpable and one that will leave you hungry for more. We highly recommend you purchase this DVD either for yourself or as a gift for your daughter, granddaughter, sister, niece or any other girl you are looking to enthrall with a brand new gift. The best part is that it was just released right before Chanukah, just in time for all the snow expected this winter. It’s an opportunity to keep your girls busy on those long snow days with kosher entertainment that not only is exciting and upbeat but inspirational and uplifting as well.

New York, Lakewood, Chicago and Baltimore experienced the magical feeling of a Shira Girls Choir concert and now you can too . . . in the comfort of your own home!  Available at your local Judaica or music store as well as online at  mostlymusic.com