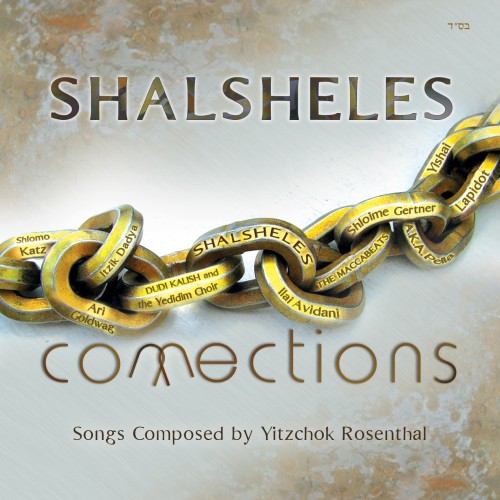 For those of you who have already heard this album and are just interested in my opinion of it, you already know of the diversity this album is packed with. For those who haven’t taken a listen yet but are a fan of the previous Shalsheles albums, you may want to buckle up for this one. CD Eichler of AKA Pella fame was brought in as a producer for this album and he certainly spices it up. I can go on for a while about the diversity this album bring to the table but then I’d bore you more than I already have :) Lets get to the review!

1. Sameach – This track starts off with a real pop feel. The composition itself doesn’t exactly sound like a typical Yitzchok Rosenthal composition but that just adds to the diversity within the album (I have a feeling I’ll be using that word a lot in this review.) This track was arranged by Aryeh Kunstler and features background vocals by both Simcha Sussman and Ari Goldwag.

2.Anim Zemirot – This track features arrangements by Yoely Dikman as well as guest vocals from Ilai Avidani (maybe related to Avi?) If you thought the first track was out of the norm for this group you’re in for an even bigger surprise (I have a strange feeling I’m going to be saying that throughout this review a lot as well). I like that this track has both a middle eastern feel as well as a “big band” sound. This track reminds me a bit of Yosef Chaim Shwekey’s “Chavivin Album. (EDIT – After writing this review I’ve taken a listen to this album a few more times and I think for right now this track is one of my favorite on the entire album. Love the vocals,composition, and arrangements.

3.Hiney Keil – This track features vocals by Shlomo Katz as well as arrangements by Dudi Kalish. This is a really great track that I could hear being added to a typical “Motzai Shabbos Kumzits ” set list. Shlomo’s vocals are strong but sweet and this composition is really a work of art. Hold out for the 2nd time around, its gets pretty funky. There’s some really amazing percussion going on throughout this track as well.

4.Somachti – This next track doesn’t just feature one, but two! guest vocalists. Yishai Lapidot and Ari Goldwag. Yishai has really been going strong for a long time and it would seem that he’s not going to be letting up anytime. Ari Goldwag brings his powerful vocals as well.

5.Yaaleh – This is a nice ballad featuring the Kol Simcha Boys Choir from Ramat Beit Shemesh. I don’t really have too much to say about this one.

6.Halleluka – This song includes vocalist Itzik Dadaya as well as arrangements by Yitzi Berry and Eli Cohen. This is the second Middle Eastern style track on this album and we’re only on track 6. I wonder if there are any more on the roster. (As a side point: Love the ” Laylaylaylay’s)

7.Lemaan – This song features the world-famous YU Maccabeats. Other than some solo’s it would the seem the Maccabeats play a bit more of a background role in this track.

8.Nigun Shalsheles – Although Dudi Kalish arranged a number of songs on this album, Dudi and his choir (Yedidim) play an integral role in making this Nigun as awesome as it is. I don’t know if this Nigun would ever be sung by a tisch with the current arrangements but it definitely will get you moving.

9.Aishes Chayil – Shloimie Gertner is the singer featured on this ballad. Overall a nice song but can’t find anything specific to report about it.

10.Hiney Ma Tov – This is one track I was excited to listen to just from reading the credits in the CD booklet. This song features C.D. Eichler’s “AKA Pella” as well as arrangements by C.D. himself and Simcha Brodsky. For those who are fans of C.D.’s AKA Pella work, you will not be disappointed, This electronic track will have you moving your head to the music immediately.

11.Yesimcha – My thoughts as I started the song were that I certainly wasn’t expecting to hear Shwekey’s “Yesimcha”!? Then it dawned on me, the Yesimcha you’ve heard on Yaakov Shwekey’s album as well as in concert was composed by none other than Yitzchok Rosenthal. This is not the first time Yitchok has “re-released” a track he composed. His Shir Hamaalos which appeared on Yaacov Young’s album a while back also made a debut on a Shalsheles album. This version however does feature arrangements by Aryeh Kunstler, and they definitely do the song justice.

12.Lemaan (Acapella) – The final track is an a capella version of Lemaan Achai (track 7) featuring the Maccabeats. For an a capella track this one does move very nicely.

All in all, if you’re a longtime Shalsheles fan and you’d like to hear an extremely diverse evolution of their past musical style, this is definitely the album for you. And if you haven’t heard any music from Shalsheles yet (not sure if there’s anyone out there who exists in that category), definitely pick it up. Its a treat for your ears and it’ll knock your socks off.