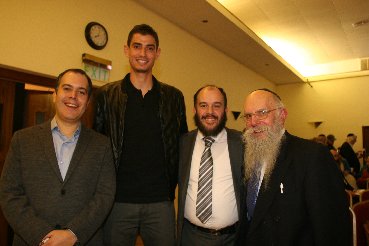 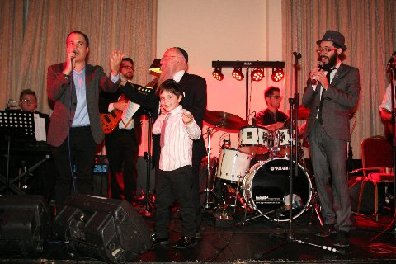 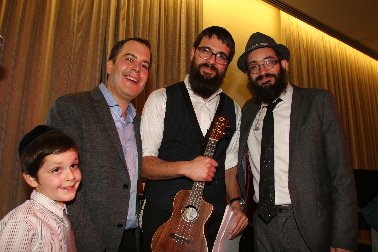 Over 220 people men, women and children packed Giffnock Shul hall in Glasgow Scotland Thursday night Yud Tes Kislev for the Lubavitch Scotland Pre Chanukah Concert by 8th Day Band from California under the auspices of Rabbi Chaim and Sora Jacobs, Scotland’s head shluchim for 44 years. The show was arranged and produced by their son Sholom of Cedarhurst New York, and subsidised and funded by the Sholom & Pessy Jacobs Family Foundation.

The food was organised by Glasgow shlucha Sora Jacobs and chef’s of L’Chaim’s, Scotland’s only Glatt Kosher Restaurant . It was truly an inspiring evening of real soul, spirit and Jewish pride with much audience participation in the singing and dancing which erupted throughout the evening.
Some twenty five people came in for the evening from Birmingham, Gateshead, Manchester Lytham St Anne’s and Edinburgh to enjoy the evening. Also in attendance was Celtic Footballer Nir Biton from Israel.

The next major Lubavitch of Scotland events include a celebration 44th anniversary dinner in Adar Rishon with guest speaker famous refusenik Rabbi Yosef Mendelovitch and the main ANNUAL Purim Dinner and Concert on Sunday 16th March.