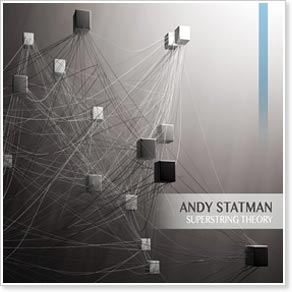 Superstring Theory may be the title of the album, but the truth is it’s super-string in reality – no theoreticals about it! The great returns with another of his genre-busting records, pushing his trio to a quintet with the addition of two brilliant musicians, fiddler Michael Cleveland and guitarist Tim O’Brien. Both meet Statman where he’s most comfortable – somewhere in the musical stratosphere between lightning quick and speed of light, while maintaining a gorgeous sound full of texture and color.

(If you don’t know Statman already, suffice it to say that he is one of the greatest musicians alive today; without question the greatest frum musician. Winner of last year’s National Endowment of the Arts and a Grammy nominee, he is a man about whom it can be said that his skill defies description – not as if we’re not going to try, in any case!)

This record flows well off his previous double album, Old Brooklyn, in that the arrangements are more souped-up than most of his other recordings. Andy has stated that his composition selection was made with his two friends in mind, and the ease of interpretation makes it obvious that he was spot on.

The opening track, Little Addy, is Statman’s second ode to a grandchild’s pacifier; and we’re better off as a result. It begins with a solid funky groove, and quickly twists into a bluegrass jam session. Cleveland and O’Brien immediately exhibit rich tone and sensible creativity, alongside the quick fingers their genre is known for. Andy follows their solos with a masterly multi-faceted jazz break-down of his own, and whoops! Right back to the funk and western opening. And for the next 2 minutes that groove just gets shredded by the lot of them. Stylish opener.

Mando on the Flambo is a live bluegrass piece, with a strong blues undertone. Statman’s solo is a showcase of complete control, as he waffles between stylistic pickings for another thoroughly enjoyable track. Larry Eagle’s perfection in percussion rules throughout.

After two rockers, you may be pining for some poignancy – For Barbara (Andy’s wife) provides you with that. It’s a beautiful folk waltz (Statman’s particularly well-known for his waltzes), and he and Cleveland milk it for all it’s got. A second slow waltz, Waltz for Ari, appears later; it is a bit reminiscent of his famous Flatbush Waltz, with an Irish/Klezmer feel. A more standard piece than most of the album.

Green Green Rocky Road – a perplexing piece for me. An African American children’s ditty, it has a sizzling tune, but with inane lyrics. It’s sung beautifully by O’Brien, who also sings Come On Let’s Go – another song I don’t relate to, being a typical secular crooner. I’m not sure why Statman chose these two, or the lyrics to the final track, “Brooklyn London Rome”. (That track marks the album’s only appearance of Statman’s clarinet, in a funky country/klezmer/jazz piece that, I’m afraid, is guaranteed to get stuck in your head for long periods of time. Great sound, despite that – especially at midships, when he trades the western for the eastern and whips into an oldtime solo. I’m still scratching my head about those lyrics, though.)

In need of a caffeine boost? The French Press’ll do that for ya! Here’s a number with hot licks and psychedelic solos. I sat with a few veteran musicians and watched their jaws drop and smiles appear from ear to ear on this masterful acoustic creation – the four string men are utterly on fire. This is what Superstring is made of!

Herman Howe’s Bayou – Ho-ley, mo-ley, how did I miss this pun for the first few days of owning this album?! Without question, my favorite track name ever. And the tune doesn’t disappoint. A western two-step, played at full-tilt with gorgeous coloring by Michael Cleveland. Statman and O’Brien, of course, match with heavily skilled solos of their own. Pale Ale Hop (another fantastic work of pun-ditry) and House of the Screaming Babes (!) are two other humorous titles with serious artistry – the former a western piece with a fiery solo that flips midway into a rock/blues piece. It is an extremely fun move, but in this author’s opinion, Cleveland could have brought it up a notch, but stays stuck in first gear and O’Brien is nary to be heard – too bad. House of the Screaming Babes (written JUST as my 10 month old seems to have given up his exhausted pleas – whoops, sounds like that was just a breather) houses Statman and Cleveland locked in a terrific sped-led jazz duet with breakout solos of the first rate.

Andy takes us to the beach on one of his few electric infused pieces (ala A Boppin’ Crib), Surfin’ Slivovitz. (Grab an acoustic earful of this fantastic number in this video here: http://www.youtube.com/watch?v=zgCvMJvjp-o&feature=em-uploademail). Certain to be a crowd-pleaser, Cleveland and O’Brien glide through their solos, leaving it for Statman to smoke through in a frenetic fury.

Superstring Theory is a one of Statman’s most accessible albums; a true master artist with continuously climbing peaks of power and skill surrounded by men of close, if not equal, musical stature. Another brilliant production by one of the most brilliant musicians of our age.