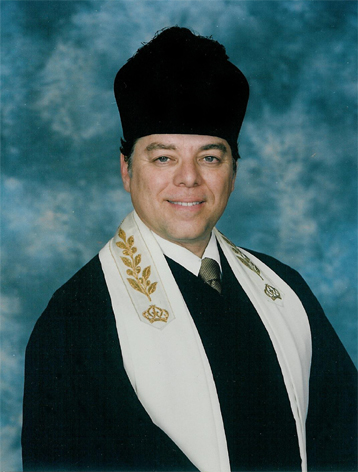 The world of chazanus is remembering Chazan Moshe Schulhof, who succumbed to cancer after an illness of several years at the age of 66.  Schulhof died in his Aventura, Florida home on Sunday night and is survived by his wife Ruchama and four children.

“A dark cloud has descended on the world of chazanus as we mourn the passing of one of the greatest cantors of our generation,” Cantor Benny Rogosnitzky of the Park East Synagogue told VIN News.

Schulhof, who was born in New York City, began his musical career at age 6, singing in a choir at selichos services for an audience of 2000.  According to a 2001 interview in the Sun Sentinel, it was that very first performance that inspired Schulhof to follow in the footsteps of his grandfather who had been a cantor in Austria.

“The service starts after midnight and when my solo came I was sleeping,” Schulhof explained.  “But I jumped up and they stood me on a chair and I sang.  When the service was over, everyone hugged and kissed me.  I decided this was pretty good. I wanted to be a cantor.”

After studying both chazanus and opera in conservatories in New York and Montreal, Schulhof took his first cantorial position in New York at age 18,  followed by a lengthy career as a chazan in Los Angeles, Montreal and Miami.  Schulhof graduated Brooklyn College with a degree in psychology and like his father, was an ordained rabbi.

In addition to his considerable talents as a chazan, having performed with the Israeli Philharmonic, the Jerusalem Symphony, the Romanian State Philharmonic and countless other prominent orchestras, Schulhof was recalled fondly by his peers for his humanity.

“Moshe was not only an outstanding vocal talent; he was a mensch, a Ben Torah, and a warm and giving human being,” said Rogosnitzky.. “Many of the young chazzanim today owe their knowledge and success to his tutelage and guidance. He will forever remain in our hearts, and his contribution to the world of chazanus is immeasurable.”

Cantor Netanel Hershtik of The Hampton Synagogue recalled Schulhof as “an exceptional cantor, one of the most important and celebrated in our generation,” and credits Schulhof for motivating him to pursue his own career in chazanus.

“I knew him since my childhood when he was occasionally invited to spend a Shabbat meal with us,” said Hershtik.  “He was always a very warm and friendly man who always had a good joke or a nice comment about my singing, which is not typical behavior for colleagues.  In one of those Shabbat table experience, I remember vividly how after we finished zemirot, he singled me out in front of everyone and told me that I had a very special voice and that I should develop it and become a cantor.  At that time I was maybe 20 or 21 and had no plans of becoming a cantor.  He was the first ‘major league’ cantor to identify my talent and encourage me to develop a career in chazanut.”

“In my first year as a chazan, I remember how gracious and eager he was to teach and talk about anything and everything, despite our difference in age and stage,” added Chazan Yanky Lemmer.  “I even stayed in his house when I had work in Florida.”

Schulhof, who sang in seven languages, took part in a 1988 series of concerts organized by the American Society for the Advancement of Cantorial Art, where he brought Jewish music to the former Soviet Union, Romania and Poland, earning a gold medal and the designation of “Master Cantor” from the Society.  He has several albums to his credit and also sang in the Capitol Rotunda for members of the House and the Senate.  Schulhof, who had a love of 18th and 19th century antiques, favored a traditional approach to chazanus and once said that he hoped to be most remembered for keeping the art of chazanus alive for the next generation.

Recalling the last time he shared the stage with Schulhof, Hershtik said that despite his illness, Schulhof’s performance was outstanding.

“It was a year ago in Toronto at the Toronto Center for the Arts at a concert called ‘The World’s Greatest Cantors in Concert’,” said Hershtik.  “He shone that night despite his illness and treatments. He stole the show and his rendition of Malavsky’s Av Harachamim that night was pointed out by many as the best piece performed that night. I was so happy for him. He really deserved to feel that kind of success. He did not give up, stood to the challenge and gave a memorable performances in one of the most important Cantorial concerts of late.”

“He was extremely weak yet amazingly strong at heart,” reported Lemmer who also sang at that event.  “He sang Rosenblatt’s Tal and added his own composition for the final two verses.  Those were sung with such gusto and emotion, wrought with feeling, as if he knew it would be his final mark.  To me, one of the most outstanding things about him was his diverse compositional powers.  From a haunting atonal Keil Molei at a concentration camp, to the most flourishing melodic structures, he mastered them all.”

Schulhof’s levaya took place today in Borough Park, and among those in attendance were some of the most prominent cantors of our generation including Joseph Malovany, Yitzchak  Meir Helfgot, Benzion Miller, Benny Rogosnitzky, Netanel Hershtik,  Yanky Lemmer and Daniel Gildar, followed by burial at Wellwood Cemetery on Long Island.