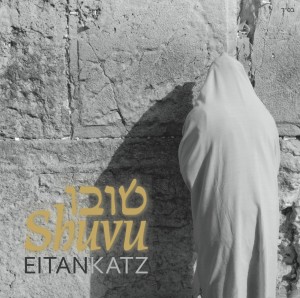 I would like to think that I have very diverse musical tastes. Of course I only listen to Jewish music so how diverse can it really be! I do think, however, that there are enough genres of Jewish music out there for me to make my original statement. Usually I am a fan of the new bold sounds that today’s musical artists are out competing to create and popularize. Then there are some artists like Eitan Katz who reach back into the nice kumzitz “Carlbach” style and manage to bring out fresh new music while keeping the music “old style”.  Eitan writes in his cover of his latest release, Shuvu, that his goal is to bring out simcha that brings us closer to Hashem, while being entertaining and enjoyable at the same time. Since Eitan composes and arranges his own music I know that the full meaning of each song is brought out by his performance on this album. The arrangements are a little guitar heavy, but since Eitan plays guitar that is totally understandable and it fits with his style. It has been a few months since he released this album and I must say that once again he has achieved this goal. I finally have a few moments to write my thoughts on this album so here I go:

Elul Nigun: For me growing up in a Yeshiva where the Roshei Yeshiva are different people during Elul and really embody in us all of the seriousness of the upcoming Yemai Hadin, a song composed with the same feelings really hits home. Just listening to the song I can feel Eitan’s quest for closeness with Hashem.  As is Eitan’s style, I really like how the song starts out with very simple arrangements and gets more complex as the song progresses. There are also some very nice harmonies by the choir as well.

Mizmor L’Dovid: I have written on other reviews how much I appreciate when the artist will write a little background about the song in the cover and Eitan doesn’t disappoint us with his little tidbits of information. This song, a hartizge ballad, was a song that he composed while walking the streets of Yerushalayim when he lived there and learned in the Mir Yeshiva. While this is not a song that will probably make it to my Shabbos table (as those of you who read my reviews know my shita about songs written to the words of zemiros), this is a beautiful song written to a very well known kapitel tehillim as well and will probably be a popular song on the kumzitz circuit.

Asher Bara: Ok, before I give my actual assessment of the song, I have to comment on the tidbit he shared with us. He writes that he composed the song while watching his young children in the morning. I laugh because who hasn’t been up early watching their children and most of us are all grumpy and unproductive at the same time. Eitan chose to make the best of the situation and entertain his children with his guitar…and low and behold a beautiful hora fit to be sung at weddings for years to come was born! Wow, I managed to review the song at the same time!

Y’hay Ra’ava: If any song on this album totally encapsulates Eitan as a musician, vocalist, person and most importantly as a ben Torah, this is the song. Before listening to the song and just reading the tidbit of this song I already knew this song would be special. The words of the song coming from the tefila of Berich Shemai, are words of asking Hashem that we should have the zchus to learn and be engulfed in the torah. Eitan writes how his biggest joy in life has always been to be able to sit and learn, which he does on a full time basis from what I hear. He writes that if he could give one song from this album as a present to Hashem, this would be the song. Just listen to this song and you’ll see why yourself.

Ata Horeisa: Once again Eitan writes such meaningful words as a prelude to the song, as the song was composed in honor of a sick boy who had a sign with these words hanging above his bed. This is an enjoyable upbeat song with a very strong message.  At the end of the day we all know Ein Od Milvado!

Ani L’dodi: This is another hartzige slow song, this one composed in honor of Eitan’s sister’s wedding. This is a song that I can envision being sung by weddings and under chupas.

Azamra: Ok so I might be impartial to this song just because of the words (v’hamayvin yavin) but this is another one of Eitan’s beautiful and upbeat horas on this album. I really like how he incorporates a lot of saxophone and violin into this song. The chorus is very catchy and that really stands out when he modulates at 4:39 of the song and goes back to the chorus. This is another enjoyable song on an album full of enjoyable songs.

Elokah: After a while I feel I am running out of adjectives to describe the beautiful songs on this album. This is another hartzige ballad and how could it not be…the words are from one of the most heartfelt zemiros we sing on shabbos and it was composed (at least the low part) at the Kossel. This song features an unadvertised solo by the multi talented Nochi Krohn immediately followed by a duet with Nochi and Eitan. Wow!

Nigun: Eitan writes in the notes in the cover that this song was written on the spot at the end of a long wedding after having to set up special for an outdoor dessert. I am flabbergasted how much simcha and lebedikkeit comes through on this song. I know what it means to have been performing at a long wedding and cannot imagine setting up a 2nd time and still having such simcha and enthusiasm. This is what sets Eitan apart and makes his music so special. His simcha is real and it really shows on this song.

Shuvu: The title track is the last track on this amazing album. The words are a heartfelt possuk that Hashem tells us to return to him and he will reciprocate and return to us. It really is that simple. Eitan writes how he was in a quandary how to arrange this song. The truth is that I like his decision to keep the arrangements simple and hartzig. It is a beautiful ending to a beautiful album!

In conclusion, if you haven’t figured out already from the rest of the review, this album is worth every penny and then some. You can find it at www.mostlymusic.com or anywhere good Jewish music is sold!