Spotlight on AKA Pella 2012 The Year in Review 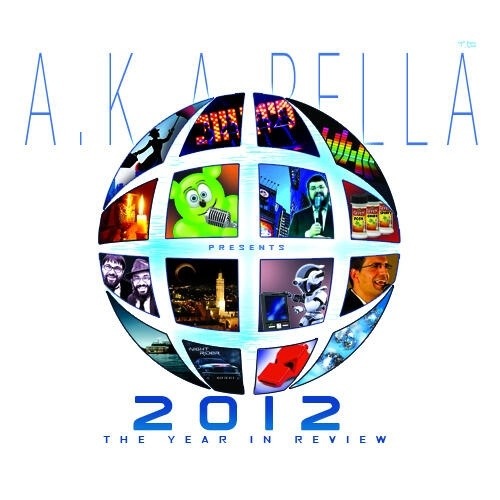 It has become almost like an annual tradition in our house.  Clean for Pesach.  Stock up on allergy medicine.  And wait for the latest AKA Pella album to be released.

It isn’t every album that we wait for like this.  But over the years CD Eichler has proven himself, by putting out consistently solid albums that blend great vocals, extremely innovative arrangements and humor, resulting in music that is seriously good and seriously fun.

Let me issue my annual disclaimers.  Those of you who have read my AKA Pella write ups in the past can skip this paragraph.  Half of the brilliance of these albums are lost on me as, with a few noticeable exceptions, I am not familiar with most of the secular stuff.  I have no clue if the secular songs beings used here have objectionable lyrics in their original format.  And honestly, even if I listened to a cappela music during Sefira, I think I would still have to pass on AKA Pella.  It is far too enjoyable and I can’t help but wonder if while this may be okay under the letter of the law, it still isn’t within the spirit of the law.  But far be it from me to delve into anything that resembles a halachic analysis.  Not only am I not qualified to do so, there is no law that says you can only listen to AKA Pella during the three weeks and Sefira.  Finally, it is a tough line to walk when you are introducing secular elements into Jewish music and exactly where that line is is very subjective.  There were definitely moments here that I might edit out if I were burning a CD to keep in my car because they just went a little far for me and it isn’t what I want my kids listening to, but those moments were few and far between.

Which is why I have been enjoying AKA Pella 2012 The Year in Review so much since Lag B’Omer when it has accompanied me on my daily hikes.  This is album is a great listen and to fully appreciate it, you need to listen to it with headphones when you are not otherwise distracted so you can catch all the bits and nuances so thoughtfully inserted here by Mr. Eichler and crew.  Back again to join AKA Pella on their sixth musical journey through the best songs of 2012 are Shloime Kaufman, Yitzy Spinner, Mo Kiss, itsi Kleinfeld and AKA Pella introduces their newest official member Shmuel Braun, who appeared as a guest on previous AKA Pella albums.  While the liner notes (always an adventure in and of themselves on AKA Pella albums) do list the same AKA Pella members as on past offerings, I didn’t notice (and missed!) Zevi Daniel’s distinctive vocals here and in a change from the norm, the liner notes don’t list which AKA Pella members solo on which song, so it isn’t always easy to distinguish who is singing what.

Finally, let me preface this by saying that this album isn’t for everyone.  Suffice it to say that if you think a song that pokes fun at last year’s CitiField Asifa is inappropriate, this album is NOT for you.

My favorites on AKA Pella 6?

Yesh Tikva:  Without a doubt song of the year for 2012, AKA Pella does exactly what the judges on American Idol, The Voice and all those other shows tells contestants to do – “Take this song and make it your own.”  While the smallest members of my family, ages two and four, were confused by the additional lyrics added into their favorite song, the other stuff added in (don’t know what songs they are, nor do I have any interest in hanging out at Target or the mall to hear the originals) work.  It isn’t easy to take a mega hit, tamper with it and not detract from it, but CD Eichler did exactly that.  Oh and guys?  The unlisted lyrics in the original Yesh Tikva album are “Kadima nitzad la’ad” not “Kadima nitzad yachdav”.  I’m just sayin’.  A great song and my second favorite on the album.  My fave?  Wait for it…

Cheery Bum Whistle: 8th Day wins the prize this year for having the most songs adapted by AKA Pella (three), won last year by producer Avi Newmark (four, one of which was used twice).  Cheery Bum was not my favorite on All You Got, (that honor is shared by Didan and Harmony) but having heard this adaptation, which is kind of addictive, I am going to have to go back and re-listen to the original.  Definitely a good song to sing along with, be it in the car or while you are working out.  Extra fun for those of you who, unlike me, know how to whistle.

TGIF 3:  Another fun song, the kind of music we have come to expect to from AKA Pella.  Mixing old stuff, new stuff, playing with the lyrics (like splitting the word “yitzave” into two separate words to fit the music), all rolled up into a five minute medley that just works.  I was thrilled to see the inclusion of Benny Friedman’s Shalom Aleichem here, a song that kind of flew under the radar, given the magnitude of some of the other songs on Yesh Tikva.  (Yes, I know…I still owe you guys a Yesh Tikva review…one day…)  Nope, still not my favorite…keep on reading…

Gummy Bear:  Is it possible to take the Gummy Bear song and make it not annoying?  Apparently it is if you take the bears down an octave so that they aren’t annoyingly high.  Maybe something to take note of when working with little kids?  The fact that they can hit notes that can break glass doesn’t mean they should.  This one just screams fun and I would love to see this one played at the end of weddings, when it is just family and close friends left, because everyone else went home the minute they finished eating their roast chicken.

Everything But The Kitchen Sink:  While there were moments here that I found objectionable, there was too much good here not to give it its due.  Both Shloime Kaufman and Yitzy Spinner outdid themselves in their guest vocals and it is to CD Eichler’s credit that he has the foresight to bring in talented guest stars to mix things up a little.  I can’t imagine Shloime Taussig ever imagined that his work would end up twice in the same AKA Pella song, but both Hecher and LaHashem Haaretz Umloah are featured here.   No best of 2012 album would be complete without Avraham Fried’s Hafachta, which is a great addition here.

Still waiting to hear my favorite?  Surely by now you have figured it out…

Cry No More:  There isn’t a lot to say about this beautiful piece of music.  The original version is an awesome song and this version shines as well, with vocals by Yitzy Spinner, and itsi Kleinfeld.

Siman Tov:  Mo Kiss takes this Shauly Waldner hit in a completely different direction and really does it justice.  I can only hope to be hearing mo’ Mo in upcoming Jewish music.  Chanukah Style:  You knew there just had to be a sendup of Gangnam Style and AKA Pella doesn’t disappoint with this Chanukah themed version.

And now, drum roll please…hands down best song on the album?

Hang Up The Payphone:   What do you get when you cross sick vocals by Yitzy Spinner, with dead on lyrics by CD Eichler with what is clearly a fabulous secular song?  You get Hang Up The Payphone, the funnest song of 2012, even if the Asifa didn’t take place in June.  The concept of using a Lipa song to list details of last year’s Citi Field gathering is hysterically brilliant and all joking aside, there are definitely some valid points here about just how pointless some of what goes on today really is. Yitzy Spinner shines so much on this song (and every other track in this album) that by now he probably glows in the dark.  Make sure you read the words to this one so you don’t miss out on any of the fun. (You can catch the words on this YouTube clip.) How can you beat lyrics like “Why is publicizing our lives such a mechaya?  I even know a guy he just checked in from a levaya.”?  And be sure to catch the harmony line at 3:37.

Finally, just so you all know I am paying attention, not all the songs on this album were released in 2012.  Both Halaila and Beri Weber’s Tatte were released in December 2011.  And while Shloime Taussig’s LaHashem Haaretz Umloah was re-released twice in 2012, it originally debuted in July 2010.

All in all, AKA Pella 6 doesn’t disappoint, with a fun and enjoyable album for those of you who like AKA Pella and don’t mind having secular music mixed into your albums.