THE WAIT IS OVER! ALL – NEW DVD – MIAMI IN CONCERT 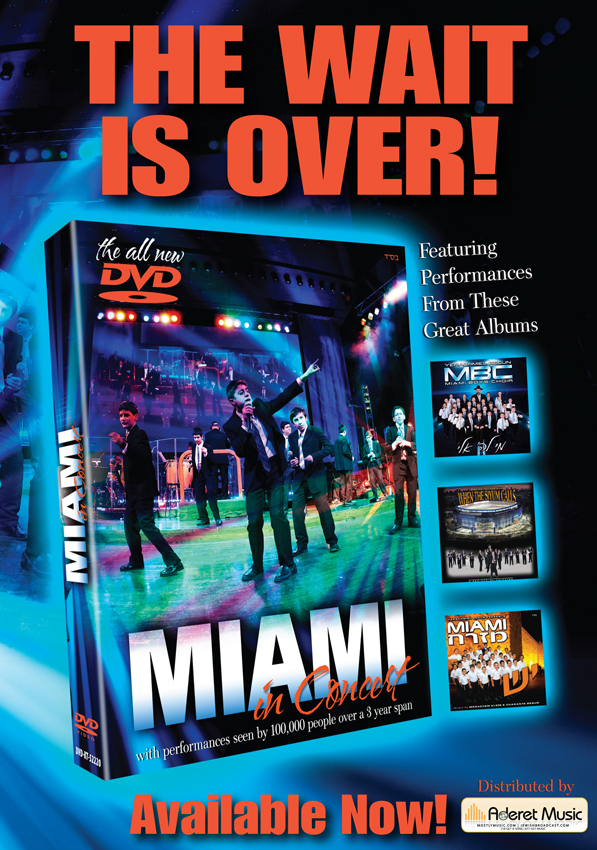 3 years after Miami’s last smash DVD Yavo, comes Yerachmiel Begun & The Miami Boys Choir new DVD release ‘MIAMI IN CONCERT’. This all-new DVD raises the bar again for Jewish music DVDs and choir performance. With many songs shot in HD 1080 format, and mutli camera shoots, the choir’s amazing new songs and dances can be seen with fantastic clarity. Those who thought Yavo could not be topped, will be thrilled to see a whole new level of Miami performance; whether it be the choirs superb sound and stage presence or solo exceptionalism. Furthermore, Miami’s wireless handheld mike technology is now allowing for an even more versatile show. And superb colorful lighting and effects to enhance the visual experience. You will want to watch it over and over again.

One big difference from all other MIAMI dvds till now, is that the performances span and include many shows over a 3-4 year period. This isn’t just one choir concert filmed, but rather songs and choirs from different MIAMI shows. The viewer gets to see and understand the musical development of the choir and its members as the years go on. You can even trace your favorite soloist in the different shows. Additionally, the styles of each choir have their own unique feel, that brings a greater diversity to the dvd. In some songs, footage is cut in and combined from different shows, revealing how the song looked on different stages.

Featured on this dvd are the hit songs from MIAMI USA last 2 albums, Me La’shem Aila & When the Siyum Calls. As a bonus a selection from Miami MIzrach, MIAMI’s choir in Eretz Yisroel, was added. Additional classics like the Hand of Hashem and a special dance medly have also been included.

To top it all off are 4 outstanding special features. 2 Features, ‘MIAMI @ Pomegranate’ shot in 2010 (before Yaleeli), and ‘In the Beginning’, showing how the Israeli choir began and were trained even long distance from the U.S., were shown at the Brooklyn College Pesach shows in 2010 & 2011. Both were never before released on dvd. The third feature is video highlights of an exciting radio interview with YB, choir members, and special guests on The Nachum Segal show in 2011. The amazing ‘When the Siyum Calls’ video on HD format rounds out the special features.

This highly entertaining dvd is for all members of the family, with an advanced and mature feel as well, & includes important themes for the times we live in.