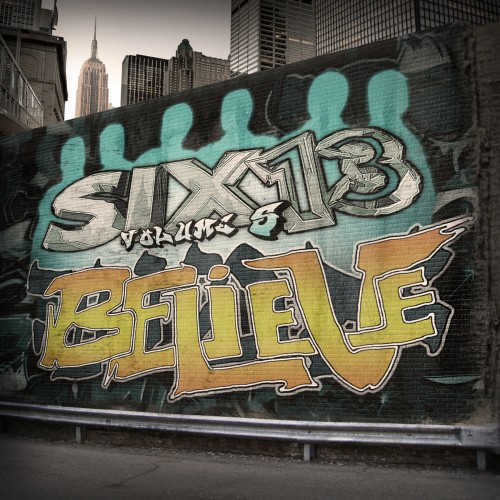 If there’s one group that’s continued to push the boundaries of Jewish music and redefine our understanding of the artistry that can be achieved with the human voice, it’s undoubtedly Six13. And now the ground-breaking Jewish a cappella group is turning heads once more with their latest release, Volume 5: BELIEVE, celebrating ten years of creating incredible music.

On this album, you can expect more of the quality Six13 has come to be known for — virtuosic singing, impeccable arrangements and tight harmonies, in-your-face thumping bass and vocal percussion, and infectiously danceable up-tempo tracks interspersed among heartfelt, moving ballads. But as always, the boys never settle for the “same old same old”. The songwriting takes a decidedly dramatic turn on this record, with soulful, ethereal cuts like “Shema” and “Mah Rabu” true to the central theme of “EMUNAH” that will leave the listener with goosebumps. On the other end of the spectrum are comedic gems, both in the form of hilarious originals like “Chanukah Rights” and the group’s trademark pop parodies, like “Good Shabbos” and “Brei Brei Brei”.

As if that weren’t enough, the guys manage to squeeze in to a power-packed track list their own unique spins on the hottest tunes in Jewish music today, joined by some of the hottest artists in Jewish music today. The Maccabeats join in with their mentors (and their original producer, Six13’s Mike Boxer) on “Ki Malachov” and “Mi Shema’amin” — and the lead vocals for “Yesh Tikvah” are provided by none other than the inimitable Benny Friedman.

This one’s got something for everyone. The Six13 boys still insist that they make music to be enjoyed 365 days a year, but whether or not you’re in the need for something for sefirah, this is shaping up as the album of the year. Don’t skip “BELIEVE” over.