Ring in Pesach on just the right note with an incredible evening of music, starring two of the most exciting voices in Jewish music! 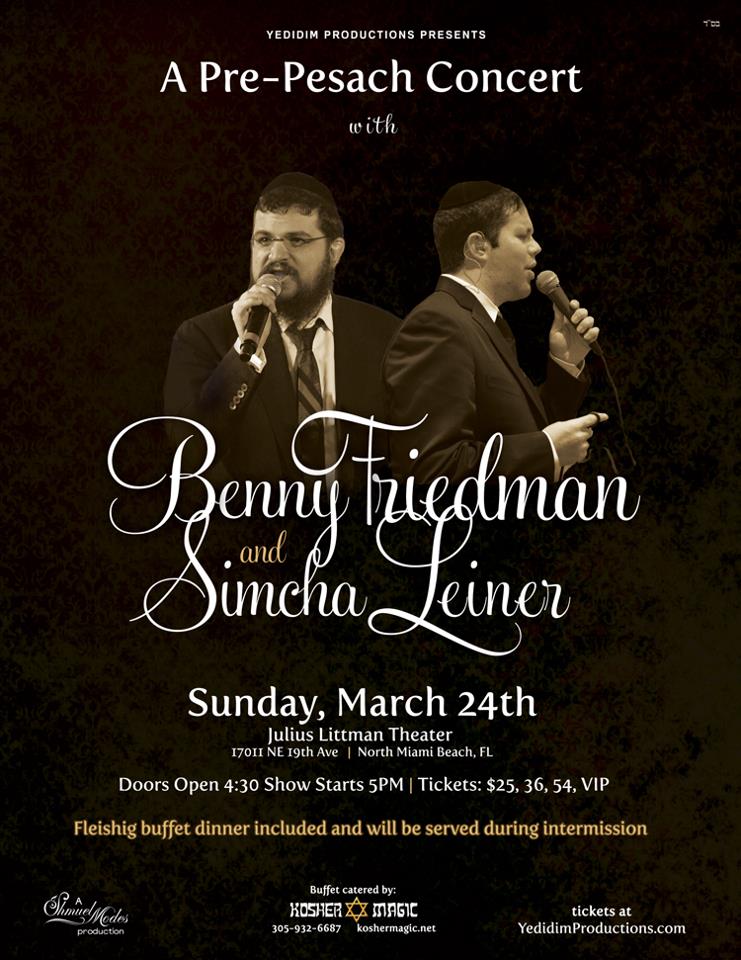 Yedidim Productions presents the hotter than hot Benny Friedman and singing sensation Simcha Leiner, joining together for a Pre-Pesach concert in North Miami Beach.    Friedman,  has been delighting audiences worldwide since he first took the Jewish music world by storm with his debut album Taamu and continues his ascent to stardom with his mega-hit Yesh Tikva off his second solo album by the same name.  Leiner, who is perhaps best known for his touching song Kol Berama, has made a name for himself on the wedding scene as he takes to the bandstand literally night after night.  Together, the two are sure to light up the stage so drop everything and take a well deserved break from your pre-Pesach preparations and enjoy Jewish music at its very best!
Doors will be opening at the Julius Littman Theater, located at 17011 NE 19th Avenue, at 4:30 PM, with the show starting promptly no later than 5 PM.  Tickets are priced at $25, $36, $54, with special VIP seating available. A sumptuous fleishic outdoor buffet dinner, prepared by master chef Shalom Zeines, will be served during the intermission, catered by Kosher Magic.
Get your tickets now for two hours of heart-stoppingly-beautiful music and mouthwatering food.  This is one concert you just don’t want to miss.
To purchase tickets or for more information go to www.yedidimproductions.com.