Hislahavus’ Review of Yotzin Bashir, by The Heart and the Wellspring 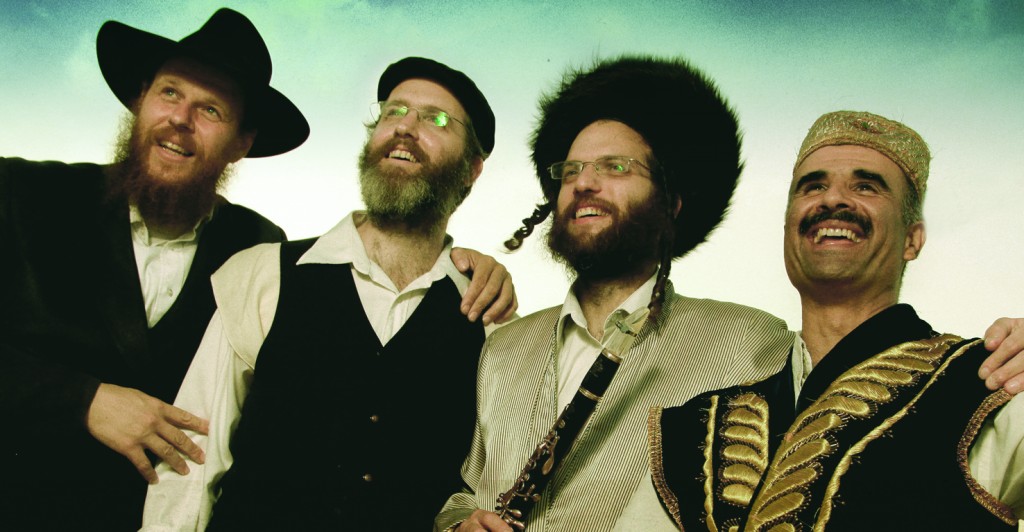 A new Chabad niggunim album! Yes, I know that there are about 3 dozen on the market, but this one is really something special. HaLev VehaMaayan is a talented quintet, seemingly unknown outside of Israel. Their anchoring soloist is Breslover clarinetist Chilik Frank, who has a sound located somewhere in between Andy Statman and Giora Feidman. He plays lightly on the keys, keeping the sound mellow but full. He’s supported by Oren Tsor (of A Groyse Metsie and Peshita) on viola, violin and mandolin, bassist Naor Carmi, Ariel Eliav with a masterful accordion, and Avi Agababa on percussion. The sound is a sort of nuevo-klezmer: a modern klezmer sound with strong classical and slight jazz influences. This is their third album together, and in each, they’ve managed to produce very classy niggunim albums. They seem to like bringing on vocals to compliment things and mix the sound up a bit, usually successfully so, and here is no different – with guests Netanel Meliov and Yonatan Razel, both Israeli singers bringing their own color to the crew, and eminently assisted by the farbrengen-perfect sounding Kfar Chabad Choir.

Honestly, reviewing niggunim albums are among my favorite articles to write for the JMR. My prior acquaintance with the niggunim gives me a specific angle to take, and it always intrigues me to see what artists can do in the ultimate musical challenge – inspire with the old; and keep the feeling authentic while bringing something new to the table. Along with whatever critiques I give them here, please note that I wholeheartedly consider this one of the very best Chabad albums yet produced.

1. Nigun Shabbos V’Yom Tov: This is a surprise opening for an album – a slow and gentle nigun that is a favorite at Shabbos meals; hence its name. Avraham Fried sings it on Hupp Cossack, although there, it’s played a bit too formulaic. Here, it has a spooky opener, which moves delicately into Chilik Frank’s deft and moving work. Into the high part, the band lends elegant support to Frank’s rough-around-the-edges clarinet, with Oren Tzor’s pizzicato adding color and light on the edges of his harmonies. The second time around, the choir kicks in, and pleasingly, their sound is exactly like what you’d hear at a farbrengen. Great move keeping it at the back of the mix. The flecking on the accordion is a nice touch. There’s a lot to listen and appreciate here, as the arrangement is quite obviously written by someone who understands the nigun quite clearly. Beautiful.

2. Dokshitzer Nigun: An intriguing accordion intro brings us into the next nigun. It pairs well with the mandolin. Very snazzy arrangement – the subtle speed is reminiscent of a Chassid singing the niggun to himself. The off-beat is an artsy addition, giving a new look to this classic. Tsor’s mandolin picks are graceful and clean, and the second time through, Frank keeps the clarinet laid-back and elegant, despite the speed of the niggun. Fun bridge, after which the strings kick in nicely. The abrupt ending is a bit unfortunate, but it’s a great piece nonetheless.

3. K’ayol Taarog: A classical style entrée brings us over to a vocal solo by Yonatan Razel. Razel is obviously not intimately involved in Chabad nigunim; despite his obvious skill and talent, he doesn’t seem to know the emotional inflection of this powerful nigun, written by Rabbi Menachem Mendel of Lubavitch, author of the classic Halachic work Tzemach Tzedek. For a better understanding of where this nigun should have gone, you can check out Fried’s version on “The Baal Shem Tov’s Song”. Here, the arrangement is too pretty.* The choppy accordion strokes don’t do it correctly, and Razel sings melodically along, but this nigun is not meant to work this way – it’s supposed to be a plaintive cry, something that Fried understood well. Razel was obviously coached, with his inflection on the word “Lekeil” as befits a Lubavitcher, but still… I like the bridge as its own melody, but it simply doesn’t fit this nigun – a case of the clothes not making the man.

*What do I mean by “too pretty”? Well, master musician Andy Statman once stayed at my house for a few weeks, and I grabbed the opportunity to talk of our mutual passion for niggunim. When I suggested that certain niggunim would be beautifully placed in a symphonic setting, he emphatically disagreed. I paraphrase his point: Niggunim were never meant to be square and beautiful creations; rather, they have a pathos that comes from their heartfelt, soul-setting that is made exclusively for vocal phrasing. That being said, the only way to truly present a nigun, is to enter into ITS world and emote through ITS voice. Classical music, on the other hand, is broad beauty, rather than inflective and unique pronunciation of a specific message.

(Tough to understand? Maybe ya had to be there to get it.)

In any case, I’ve only recently come around to understanding what he was talking about… But the arrangement of this nigun, as well as Niggun Hagadol further on in this album, really brought his point home for me.

4. Nigun Simcha: While the intro repeats too many times, this nigun smokes. The crew dig into it powerfully without losing its taam, the taste and flavor of the nigun. The proof? Sing along – it flows easily outwards from you, doesn’t it? The bridge is classically klezmer crafted well by Oren Tsor. A simple critique on the percussion – I would have liked more beat changes throughout the actual nigunim, with less basic repetition. In totality, though, it is a wonderful representation of this nigun.

You can hear (and watch!) the guys perform that piece here: http://youtu.be/wlYanxVisaE

5. Nigun Hisvaadus: They play the nigun as it’s sung – a wise move, as others have recorded it too slow. Tsor harmonizes beautifully against the clarinet through the first rep, and afterwards, they’re joined by the choir. The choir keeps the basic shape of the nigun, staying away from the temptation to harmonize. This is simply because in Chabad, for some reason, nigunim are sung as they are – harmonies are eschewed. On the third go, they speed it up perfectly, again, as you’d typically hear the nigun sung (maybe in shul, when some chazonim put it to the words of Mimkomcha), getting ever faster and faster. Another delectable treat.

6. Nigun Shabbos V’Yom Tov 2: This contemplative tune is a difficult nigun to play, but I must say, well done! A dark background sets the melancholic feel, accentuated by the deep viola. While I like the emotion he lays into it, I don’t agree with all the placement of Frank’s trills. It feels like the balance of the song is off as a result. Despite that, it’s a good product.

7. Nigun Chassidei Hatzemach Tzedek: This little-known nigun sounds Breslover, but it’s not – it’s from the Tzemach Tzedek’s Chassidim. The drums and percussion are sweet, and this time around, Chilik’s ornamentation works perfectly, and everyone is in perfect sync. Nothing at all to critique on this masterly presentation!

8. Yemin Hashem: This beautiful tune is another written by the Tzemach Tzedek himself, and it is given delicate treatment here. The bridge, a soothing, soft movement, is very pretty but could have used some more emotion to dig into the nigun. At the same time, talented vocalist Natanel Meliov and the Kfar Chabad Choir put the emphasis where it should be. (As it is, in my iPod, I have other versions by Fried, Moshe Laufer, Isaac Bitton, Lipa and Andy Statman – great to hear how different artists view the same melody!)

9. Fonke: This rare melody is a keeper, sliding back and forth between gentle movements and the more brisk, energetic chorus. Their performance comes through as authentic and real. You’ve got a great conversation going on between the mandolin and the clarinet, and bass lends its subtle hand beautifully. Towards the end, they really let it out, but without losing control. I only would have liked to hear more, maybe with a bit of a jam session…

10. Nigun HaGadol L’R’ Hillel Paritcher: R’ Hillel HaLevi Malisov of Paritch (1795-1864, Chief Rabbi of Bobroisk) was one of the most eminent Chabad Chassidim, and arguably one of the greatest Chabad composers. His songs are deep and particularly haunting. This very complex nigun – one of my absolute, all-time favorites – is played with a classical arrangement. While you may be able to reach into its depth by listening to it here, they should have allowed the rhythm to get spontaneous and emotive; particularly in the high part. You just don’t have enough melancholic angst. But if you want to upgrade your Shabbos table or Shabbos davening experience, study this nigun well – it’ll bring you to new spiritual vistas…

11. Nigun Hisvaadus 2: The album ends on a slightly different note, with Naor Carmi kicking in with some jazz piano/cello rhythm overlaid by the accordion and violin, and clarinet solo. Another tender and warmhearted experience, although, clocking in at a short 2:47, it could have used something more to truly wrap up the album.

A yashar koach, chevra! What a pleasurable, mystical, deep, spiritual, colorful and spirited album – can’t go wrong with this exceedingly talented and truly inspired group! If you’re looking to get to know Chabad niggunim, or if you’re already an aficionado, or if you love beautiful instrumental music, or if you’re into the genres of klezmer or classical music, you’re going to want to pick this one up. As for me, this album has quickly become one of my favorite niggunim CDs, and I’ll be checking out their other albums. Ah mechaye…