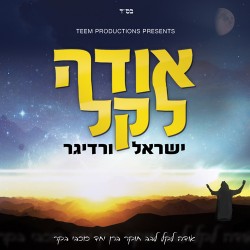 Rarely do I have the opportunity to write a review about such an album. Sruly is not just a special talent. He is a wonderful person and his warm and aidel personality shines through his music. Prior to releasing Oideh Lokeil, he released 2 other albums which were both hits. However, this one is by far the best. It is produced by the famous Teem Productions – Yossi Tyberg and Gershi Moskowitz. The music is arranged by Shua Fried and   Yanky Briskman. Let us not forget that Sruly really put Shua Fried on the map when he made the arrangements on his first album – Bayis Ne’emon.

This kicks off the album with a bang. It’s a wedding song similar to  Bayis Ne’emon from his first album.

This one starts off  quietly , but the high part is high and sung very well. It’s sort of mid-speed, but at 3:30 some more spunk is added to the music.  I love the way he ends the song on a high note.

This song is a hartzige masterpiece. A deep tefilla for good children like a mother would tearfully express by lichtbentshen. It starts with with haunting music and the sound of children playing in the background. The children’s choir enhances the song as it is about the kinderlach. Do you remember “Oh Dovid” from JEP #3?  This song starts off very similar to that and that song was a breathtaking hit. A very emotional tone-setter for the whole song. The second time around he adds emotional Yiddish words that’s like icing on the cake and makes the song all the more emotional.

The title song of the album and it’s an upbeat techno song . It’s funny that the message is not direct that one ought to keep his neshoma clean, but rather just tune in to its beauty while thanking Hashem for it, and the music enhances that message.

Just the words alone are a real hit! They are taken from the Ohr Hachaim Hakodosh in Sefer Devarim and describe how wonderful it would be if people would feel the sweetness of the Torah. The inspiration would be so powerful that they would poshut go NUTS!!! over it and not give a hoot about all the money and riches in the world because the Torah encompasses all the good things in the world.

The tune starts off like a typical nice slow song, but then in the high part, it takes off  with a beautiful kneitch on the word “mishtagim” which means ” go crazy”. The song finishes off with repeating the words “Ki Hatorah koilleles kol hatoivois” (the Torah encompasses all the good things) slowly at first, then speeds up.

A nice above average mid-speed song that has a very sweet high part.

A geshmake 3 part  fast song that gets you dancing. At about 3:45 it slows down somewhat for the second part –  like the shtick like sometimes happens by hakofos when we really get in to it.

Interesting that this is the 3rd time in the past year that songs came out from this Friday Night zemer. The others being Tzudyk and Miami Mizrach. However, unlike the others which are more hora style, this one is slow and hartzig to match the words that are meant to sooth the broken souls of our nation with the neshama yeseira of Shabbos. Then at 4:40 it speeds up to a more upbeat ending  of hope.

This is the hit from the fast songs of this album. If Gadlu didn’t get you dancing, this definitely gets you pumped up and ends off with a bang with really high notes.

It starts off with the popular nusach that Baalei Tefilla use for  Slichos and Neila so we know that this is a slow deep tefilla to daven to  Hashem for rachamim. The high part transitions to an optimistic tone of faith that Hashem will answer our tefillos and tears. Here too Sruly’s aidel personality shines through and as a fantastic Baal Tefilla for Yomim Noiroim, he means it when he sings this.

A hora- style Lubavitcher Niggun that will definitely get very popular. Whoever knows Sruly can visualize him singing this at weddings and get the oilom really in to it!

To sum up, you gotta get this masterpiece!