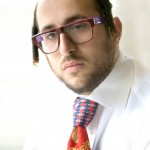 From The Jewish Press

He is a singer, an entertainer, a performer, a composer, a lyricist and perhaps the most revolutionary force to ever hit the Jewish music world. But for the last two years, Lipa Schmeltzer has donned another guise, trading his microphones for textbooks and the concert stage for the classroom, as the colorful artist has headed to school in pursuit of a college degree.

Schmeltzer’s dream of obtaining a higher education began approximately two years ago as he drove past the local community college and began to contemplate the possibility of earning a college degree. Stopping off at the registrar’s office, Schmeltzer inquired as to the enrollment requirements and was told he needed a high school diploma.

“I never got an education other than biblical stuff,” reported Schmeltzer. “I called up someone in New Square and he got me a paper saying I had graduated high school.”

Not surprisingly, the registrar at Rockland Community College, a two-year school which is part of the State University of New York system, informed Schmeltzer that the paper he was holding was of little value. As English is actually Schmeltzer’s second language, he spent eighteen months working towards his high school equivalency diploma, taking classes at the Rockland County Board of Cooperative Educational Services as well as studying with private tutor Chaim Glovinsky in order to pass the series of five tests which would award him a General Equivalency Diploma and allow him to enroll in college.

Now completing his first full semester at RCC, the 34-year-old Schmeltzer is a firm believer in the value of proper schooling.

“I never had the opportunity to get an education,” explained the superstar. “It’s not fair what is going on in many communities today. People are getting married yet they have no way of supporting themselves and one day they wake up and realize they can’t manage. Even if someone disagrees with the idea of going to college there are still programs which can provide a college degree so that they can make something of themselves and support their families.”

Schmeltzer, who is pursuing a dual associate’s degree in performing arts andliberal arts, a two year process, took twelve credits in his first semester and hopes to take a full 18 credit course load for the upcoming spring semester. Among the courses Schmeltzer plans to complete in his first full year in college are acting, dance, musical theater, English, psychology and pluralism and diversity.

Both Schmeltzer’s classmates and the faculty at the college laud his exuberance, his talent and his determination.

“Lipa is kind, enthusiastic and nice to everyone,” said classmate Neidin Loughran. “Everyone in our acting class respects him, his beliefs, his decision to enroll in college at his age and his passion for performing.”

“Lipa has never boasted about his career but he is a superstar to us,” added department chairperson, Patricia Maloney-Titland, who was also Schmeltzer’s professor this past semester. “His manner, his work ethic, his creativity, everyone enjoys what he brings to the table. Lipa clearly inspires people and if anyone can be the messenger to remind us that we all need to find common ground to unite us, he is going to be that guy.”

In fact, Schmeltzer views his time at RCC as an opportunity not only for his personal growth but that of other Jewish students as well. Rabbi Dov Oliver, director of the RCC Hillel, which also doubles as a Chabad House, had nothing but praise for the college’s most well known musical personality.

“From his first days at RCC, Lipa has been here offering to do whatever he could,” reported Rabbi Oliver. “He has helped me put tefillin on kids and he brought his entire family for our annual Shabbat dinner. He made kiddush,sang zemiros, did badchanus and literally made his way to every single table in the room, making everyone feel good. Once, at our weekly parsha shmooze, Lipa spoke about his life, how unlikely it was that he would have ended up in college, explaining that you never have to accept your circumstances as the end game, you can control your own destiny and work towards what you believe. He made a very powerful impression on the students.”

Enrolling in college as an older student is just one of the many projects the enterprising Schmeltzer has undertaken. The entertainer is inordinately proud of the shul that he founded after relocating to Airmont, New York, several years ago. Having faced many challenges in his own life, Schmeltzer took great care to ensure that the shul be a place that is open and welcoming to everyone.

“I was a guy who wasn’t always welcome everywhere and I know what it is like not to feel comfortable walking into a shul,” recalled Schmeltzer. “For a long time I didn’t always have a place to daven on a weekday. I want everyone to feel welcome here, from those who come every day at 5:30 a.m. for the Daf Yomi shiur, to those who only come occasionally.”

Fellow congregant Yoely Weiss describes the Airmont shul as a place unlike any other.

“It is a loving, accepting environment, that isn’t chassidish, yeshivish or modern,” said Weiss. “It is everything and for everyone. There is a seriousness in the shul for true yiddishkeit and clearly people respond to that because it is jam packed every morning.”

Not an official rabbi as of yet, Schmeltzer hopes to add that title to his long list of credentials one day and is currently doing a twice-weekly online semichaprogram via Skype.

“I don’t know if I can finish the whole thing,” admits Schmeltzer.

Despite a hectic schedule that begins at 6:30 a.m. with a vasikin minyan and includes concerts, weddings, a newly released music video, Schmeltzer remains dedicated to his goal of getting a degree.

“I try to tell people the value of an education,” explains Schmeltzer. “You never know what’s going to be fifteen years from now and having a college degree opens a lot of doors, doors that you might need one day in the future.”