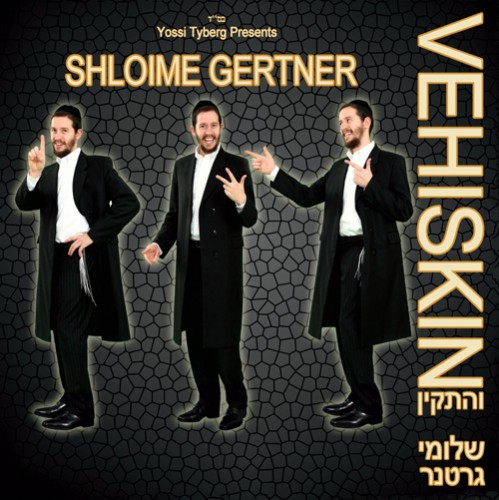 It’s that time again! Time to review another album. It’s been a while since my last review but I am working to stay more on top of them. Today I’ll be reviewing the latest Shloimie Gertner album entitled “Vehiskin”. Although many times a singer from another country outside of America will find a hard time “making it” here, I think that Shloimie Gertner has really made a splash (not to be confused with Lipa’s Splash) outside of his home country as well. This album along with his others are a joint production between Yossi Tyberg (who produced the album) and Gershy Moskowitz (who directed it), both of which have numerous albums and concerts under their belts. Much like Suki & Ding I believe this is a TEEM (get it? :) ) that will be working together and producing projects for a long time to come.Now to begin!

1.Chayim – Traditionally the first song on most albums tend to be jumpy and fast paced. Although I’m sure it was a hard decision for Shloimie’s first song off this album to be more mid-tempo, I’m glad that’s what they did. This song composed by R’ Baruch Chait (originally of “The Rabbi’s Sons”) is a great song to walk you through the start of the album. Starting with a bright guitar sound and introducing the accordion and slide guitar I think all around this is a great song. I happen to like the stop-and-start at 3:17. The album booklet states that Shloimie Gertner heard this song from R Chait while singing at a Kumzits by his Yeshiva. I think that explains this song perfectly, its a great Kumzits song.

2.Kol Haolam – Like many songs of its style, this song starts light and leads into the disco that it is. Shloimie’s vocals really cut through the music nicely and you can hear every word he is singing very clearly. Love the bass line on the high part. This is also a very catchy song and I would say there’s a good chance that this song will make it to the “Simcha Circuit”. This song is both composed and arranged by Moshe Laufer. I like that the song doesn’t overdo it on the brass and the brass that is in the song is pretty low. Choirs also blend very nicely with the song.

3.Haposeach – It’s a chiddush that we already got 2 songs into the album without hitting a Yitzy Waldner composition so luckily here’s one! This song arranged by Ilya (Eli) Lishinsky keeps your head bobbing to the beat. (Disclaimer:If you’re at work you may want to wait until you get home to listen to this one unless you don’t mind if you’re coworkers think you’re weird.) I love all the background vocals from Yitzy Waldner (Seriously Yitzy you’re killing us! Come out with your own album already! You’ve got a great voice and great songs = great combination)

4.Yehi Chasdecha – This song starts off with a very haunting intro after which the song “opens up” a bit more. Composed by the one and only Yossi Green. I find that many times when Yossi composes he keeps in mind not only making the song a “hit”, but also what song would go best with the voice and style of the artist he is composing for. This song fits Shloimie very nicely. This song, of course, features background vocals from Yossi Green as well.

5.Vehiskin – To start, this may be my favorite song on the album. I love the organs that start it off. The song then goes into a rock but its still not as crazy as many other Jewish songs with a “rock” style that come out nowadays. The message of the song is also awesome. All too often I think people listen to music as just music and forget what words they’re listening to and what they mean. Gertner’s falsettos are really great too, great idea for this song. Composed by Yitzy Waldner (because who else could give us such an awesome song?). I like the guitar solo at 2:35 in the song too, it’s a very funky sound. Yitzy Waldner also gets a chance throughout the song to show off his falsetto as well.

6.Adon Olam – This song is also composed by Yitzy Waldner and arranged by Richard Niles. Although Richard Niles may be an unknown name in the Jewish Music World, he is actually a VERY big name in the American/British music world. He has worked with and arranged music for artists such as Cat Stevens and Ray Charles. This is a great R&B-ish arrangement. I like the electric pianos, guitars, and light synths which help bring the music together.

7.Ureh Vanim – Another song composed and arranged by Moshe Laufer. This song along with many others shows you something that people seem to forget. That is that an arrangement does not have to be so complicated in order for the song to be good. A simple but good arrangement can work really well on a song and won’t take away from the composition itself.

8.Shehashalom Shelo – Pinky Weber is the composer of this soft waltz. I don’t really have anything specific to point out on this song but it’s nice.

9.Ben Chorin – This song is a very nice Disco/Rock composed by Yanky Erlanger, a new composer.This song was released with a music video featuring Shloimie and the Hamenagnim Orchestra in a winery. I like the way the choir was blended with Shloimies voice by the words “Elah Mi”.

10.Mimkomo – This song is another by Richard Niles. Although it is probably arranged a bit more mainstream than “Adon Olam”, it still has an edge to it. Baruch Levine is the composer behind this song.

11.Riboin – According to the album booklet this is a song that Shloimie has been holding onto for a while now. Composed by the one and only Lipa Schmeltzer, this song has an electric R&B/Reggae feel to it, and the vocal arrangements fit the song very nicely.

In conclusion, I think that this is a very solid follow-up to Shloimie Gertner’s 2nd CD. Filled with songs slow to fast with a bit of mid-tempo mixed in this is a nice CD for when you’re in the mood to listen to an album that has a bunch of different flavors in it.