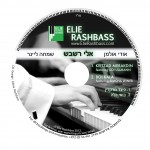 Elie Rashbass is a musician, songwriter, and bandleader living and working in Israel but regularly performing in London as well.

Over the years, Elie has performed to great acclaim with international singers including Shloime Gertner, Udi Ullman, Simcha Leiner and Ari Goldwag.

As well as the piano and keyboard, Elie plays clarinet, drums, and guitar and has a deep knowledge of music theory, which allows him to develop rich and powerful arrangements for all well-known Jewish songs.

From his classical music background, Elie creates a unique, piano-led tonal landscape with his band. He also performs solo as a one-man-band, blending chassidic and rock styles to create the perfect sound and rhythm for dancing. His calm and moving piano playing at chupas is famous for mirroring the emotion of the occasion.

Elie has now released his two newly-composed wedding songs, which are available for free download for everyone to enjoy. His ‘Keitzad Merakdin’ has just hit the wedding scene and features a duet between Elie and Udi Ullman, the popular Israeli wedding singer. His second new composition, ‘Boi Kala’, is a moving chupa song. Elie is joined by Simcha Leiner, the highly sought-after American singer, famous for his amazing ‘Kol Berama’ single.

Produced, engineered, and mixed at MidiKol studios in Jerusalem, both these songs feature top Israeli musicians Avi Singolda, Avi Avidani, Avromi Basch, David Mendelsohn, and others, along with a fantastic choir led by Moshe Roth in ‘Keitzad Merakdin’.

For more information and for the free downloads go to: www.ElieRashbass.com