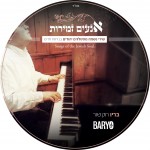 After his first successful album “Shir Ushvacha” (with the hits “Ohr Hal’vanah,” “B’rachamim,” “Sagidna,” “Shir Ushvochoh” and more) and before his 2nd album (Baryo 2) – the singer Baryo Chakshur presents a special project in honor of the Yomim Nora’im, “Anim Zmirois,” which has 18 songs from the best of Jewish music, new and old, from elite composers (Moshe Laufer, Yossi Green and more).

Baryo (23), a talmid of Yeshivah Torah Vodaath in New York, self-accomplished singer and composer, exploded into our midst 7 years ago with his first composition “Birshus” which was sung by Yaakov Shwekey and immediately became a huge hit, and afterwards introduced his first personal album to us, and with siyata dishmaya became very successful. At the same time, Baryo came out with other songs that were not included in his album (like “Noflah Ateres Rosheinu,” a song which he composed in honor of some of the Gedolim that were niftar in the past year or so, among other songs).

In the past year, Baryo teamed up with several musicians of the new generation of Jewish music in a few songs, among those musicians, the youngest son of the composer/arranger Moshe Laufer, who arranged the new hit single “Ki Hamalchus,” which will be in stores this Succos.

Recently, Baryo was selected to join a Coca Cola musical project of Shabbos songs, together with 23 other worldwide singers.

Now, with the spirit of the Yomim Nora’im in the air, Baryo presents his special project “Anim Zmirois,” which has three new songs besides for the nostalgic ones, three songs that Baryo composed himself, including “Melech Yoishev” which is already being played on the Jewish radio stations.

Nigun will be doing the distribution of the project in the United States.