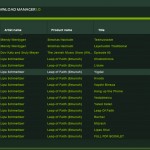 Reprinted with permission from VIN News

While many in the Jewish music business have forecast the end of the industry due to rampant copying and illegal downloading, one music distributor has taken matters into its own hands, by addressing consumers’ main complaints and meeting them head on.

According to Mostly Music, which distributes albums under the name Aderet Music, two often cited reasons for illegal duplication of music are the cost of new albums and the time involved in either going out to buy new music or complicated download procedures on music websites.  In response to feedback from the public, Mostly Music has taken it upon themselves to tackle both of these issues by lowering the price on downloads and by introducing new software that makes downloading music from the site almost instantaneous.

“With the old system, after buying an album as a download, the customer would receive a link via email which they had to click on, download the file, unzip it and put in a particular directory on their hard drive,” Sruly Meyer, director of marketing at Mostly Music told VIN News.  “With our new downloader all you need to do is buy the download, open up the program, refresh the screen and all your music is right there waiting for you.”

The standalone downloader has been under development at Mostly Music for the past six months and Meyer hopes that its convenience will encourage more listeners to obtain their music in a manner that is halachically appropriate.

Additionally, in an exclusive announcement to VIN News, Mostly Music has revealed plans to lower its price on all full album downloads to $9.99 in the upcoming weeks, with prices on older albums being dropped even further.  The first album to be offered at the new low price is Lipa Schmeltzer’s Leap of Faith, which was released this morning.

“People complain that CD prices are too high, that going to the store is inconvenient and time consuming and that downloads are too complicated,” said Meyer.  “We hope that by promoting lower priced downloads and providing a simple, legal and inexpensive way to download music, people will be more likely to buy music instead of copying it from a friend.”

Meyer admitted that currently, in the case of almost every new release, not enough people buy CDs to justify the amount of money invested in them and that the Jewish music business will be in serious jeopardy if the practice of illegal copying and downloading isn’t brought to a halt.

“We asked for feedback from the public and we got it,” said Meyer.  “We have addressed those concerns because we don’t want anyone to have any excuse not to purchase music legally and easily.  We heard you.  We made the changes you asked for.  The ball is back in the consumer’s court now and we hope that you respond in kind.”