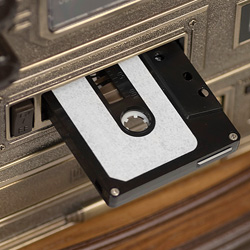 A few recent Facebook conversations about some older albums have gotten me started on a nostalgic music tour. I started (before sefirah of course) by borrowing the old cassette of Labele Heschel obm’s Mital Hashamayim, where he is the 2nd person to sing the now famous Elokai Neshama (Dudu Fisher did originally release Moshe Laufer’s gem in 1985 and Labele released his album in 1987). Listening to the cassette (yes I still have cassette players) brought back many old and good memories. I started thinking back to the first cassettes that I personally owned, We Believe by Dov Levine, and Journeys 1. The person who drove our minyan van to school used to listen to Dov Levine’s debut album, Vechulom Mekablim, and therefore I had become a huge Dov Levine fan. I even got his autograph when he came to Chicago for a concert (it is on my We Believe cassette jacket). As a child I was obsessed with choirs, and loved Miami Boys Choir (Shabbos Yerushalayim was my favorite) and Tzlil V’Zemer Boys Choir (Aibeshter was my favorite, but their 1st 3 albums all got a lot of play time by me). In those days, of course MBD and Avrohom Fried were big, but I loved listening to Michoel Streicher and thought he was on par with them. We had our child prodigy in Zohar, who besides for being one of my favorite Tzlil V’zemer soloists put out a couple of solo albums. I could go on and on, and I could even sit down and actually go through my old cassette collection, but these are the memories that come back to me. I am curious to hear what your nostalgic memories are!