JMR welcomes another new writer to the fold. JTopBlogger. We look forward to more articles by this new author. (If you want to write for JMR please email us at JewishMusicReport@gmail.com) 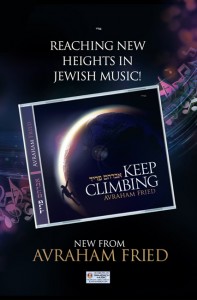 Avraham Fried will be 53 years old on March 22nd, yet despite his age he continues his irrefutable dominance of the Jewish music scene with unparalleled finesse and apparent ease. His gentle, yet powerful voice has succeeded time and again in epitomizing the depth and soul of what our music is all about. In my humble (yet admittedly credible) opinion, he is the only Jewish mega super-star today. The only flaw is that there tends to be a long wait between one (original) album release and the next. But, my fellow fans, the wait is finally over and as you’ll see below, it was well worth the 6 years!

Hofachto- This is a simple yet catchy rock song with a taste of techno mixed in. It seems to me that it may make it onto the average wedding playlist. Kudos to the arranger for having the guts to put a mi6 chord into the high part in a very unique fashion (I know most of you reading this probably have no idea what that means but for those who do, I think you’ll agree with me). 7 out of 10 stars.

Yehalelu- This song is a beautiful old-style waltz which is reminiscent of Dovid Werdyger’s albums. I honestly can’t find anything wrong with the tune, the vocals, or the arrangements so I’ll give it 10 out of 10 stars.

Vezakeini- Boruch Levine definitely sings some of the most beautiful songs out there today, but it’s time for him to surrender the mantle to Fried as far as the nicest Vezakeini is concerned. This is an absolutely gorgeous 3/4 ballad which highlights Avraham’s sweet voice with some very nice arrangements. The introduction sounds a bit like Yossi Green’s V’Oz Yehu from The 8th Note. There is also a bridge that briefly switches the song from a major key into a minor key which enhances the overall beauty. My only issue is that it can get a little confusing as to which are the high and low parts. 8.5 out of 10 stars.

Ein Kelokeinu- Avraham sings this Disco/Hora with a chassidishe havarah as well as some Yiddish lyrics. In the second part of the song he modulates into a higher key (I won’t bore you with the details) with a smoothness that will surprise even the most experienced musicians. The arrangements are ok but really have room for improvement. 5 out of 10 stars.

Retzoneinu- This starts out with a chazzanus theme which is personally not my favorite genre of Jewish music (this may or may not be a result of my inability to play it well on the piano), but even I must admit that it’s really very enjoyable. About 2 minutes in, the song switches to and stays on a normal ballad pace. You can feel a lot of Yiddishe hartz in Avraham’s vocals throughout this beautiful song.  It will definitely become a staple of dinner music (if the singers can remember all the parts). The arrangements are more than adequate. 9 out of 10 stars.

Kach Es Sheli- This is not an original song. To the best of my knowledge it belongs to Yisroel Parnes. The arrangements for this hard rock are impressive; especially the bass track. Bands may tend to play it a bit more wildly and expressively, but for a CD recording this is just fine. Somehow this sounds more like Benny Friedman’s style than his uncle’s. 6.5 out of 10 stars.

Keep Climbing- Ah, the title track. Many CD’s out there feature title tracks that are good but just not quite “title track material”. Not this one. Avraham composed this inspiring song which is an uncommon (at least in the Jewish world) 16 beat ballad. The lyrics are really poignant and meaningful, describing the challenges one faces in life and how one must never give up on overcoming them. This song reminds me a little of Father Don’t Cry because of the way it switches keys without notice. The arrangements were perfect in my opinion. 9 out of 10 stars.

Amein- This has an incredibly throbbing rock beat with fantastic arrangements. In this song (as well as others in the album) Avraham proves that he excels at both ends of the musical spectrum – slow and fast. In the middle of the song there is an instrumental part which sounds like the rhythm section tracks got stuck.  I can understand what the arranger was trying to accomplish but I still think it was too cheesy. One thing I really liked were the lyrics which were a fresh and welcome change. 7.5 out of 10 stars.

Lomoh Hashem- This is another one of Avraham’s inspirational songs. It’s a smoother type of ballad with some great arrangements. This should be a very nice dinner song at chasunas in the near future. 8 out of 10 stars.

Sharei Mizrach- This is a very Shwekey style middle-eastern hora with quality arrangements. Like I said before, Avraham has shown that he can sing any style professionally and authentically. I would bet that this song will become one of the regular horas. 8 out of 10 stars.

Elokai- It’s unclear where the song originated although it doesn’t make much of a difference since it’s a classic, tailor-made Fried song. His vocal range and power are clearly demonstrated in this haunting and gut-wrenching song complete with appropriate arrangements. At the end, he hits a very high falsetto note with grace. This is one of the most amazing songs I’ve heard in ages! 10 out of 10 stars.

Light- This is sort of a Lipa type chillout song. It’s enjoyable to listen to the arrangements. 6.5 out of 10 stars.

Heimoh Heimoh- I was told this was originally Sruli Ginsberg’s song. It has one of the most unique intros I’ve heard in a long time. If the song makes it big it will be because of the arrangements which have shtik but are not overdone. Otherwise it’s a little boring. 7 out of 10 stars.

In conclusion, this is a great album with Fried sounding better than ever! I will give it 9 out of 10 stars which means that you should hurry to your local music store to purchase the album or you can go buy it now at http://www.mostlymusic.com/keep-climbing.html and I promise you won’t be disappointed!