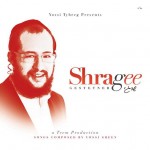 Just when one may think that the Jewish music world was saturated with enough singers, the ” esTeemed” Teem Productions has treated us to Shragee Gestetner, a Haimishe Yingerman that sings songs with a wide range of styles that will please everyone who has taste for Jewish music. He has a clear sweet voice that reminds me of Shloime Gertner. So if you are a Gertner fan like most of us, you gotta get hooked on to Shragee!

The album consists of 11 songs. 5 are composed by Yossi Green – himself a multi-faceted composer and the best in the business. 3  are composed by Shragee himself and he is not a novice in composing great songs. For example, Shragee composed a song Anim Zemiros  for Shloime Daskal’s album. The remaining 3 are composed by Pinky Weber, Ari Haas and Moishe Peretz Schwartz.

Most songs are arranged by Shua Fried who is an amazing arranger and keeps getting better.

The songs on the album that stand out the most are as follows:

#3- Malei Mishalois Libi composed by Shragee is a hauntingly beautiful song. At the 4:10 mark, he comes in like a backup vocalist in a big time powerful way that’s very meoirer.

#5 – Kerachem Av composed by Yossi Green is a really hartzige nigun. (It’s funny that the last time I remember Yossi composing a song with these words was with New York School Volume 2 in the 70’s…) But you gotta hear this song…. Chamoil, Chamoil,Chamoil al ameichu….and the arrangements at the end of the song…very touchy.

#6 is Dayoy composed by Moishe Peretz Schwartz – The words are “Ma yisoinein ho-odom chai, dayoi shehu chai”. I remember hearing a drasha from Reb Zelig Pliskin that always talks about happiness and he mentioned this phrase base on a passuk in Eicha and that once a person appreciates the fact that he is alive there is nothing to complain about. This song brings out this yesoid in a powerful Hora – style way. So if someone fels a little down, he can just turn on this song and immediately start dancing!

#10 is Uvruchim Heim composed by Shragee. It’s a really varemeh song and maybe the best song on the album. It includes a chidren and adult choir led by Moishy Kraus.

To sum up, when you have a new singer that has the best composer for the biggest portion of his songs, and includes his own compositions ” in er hot nisht vus tzi sheimen” then you know it’s a smashing success.