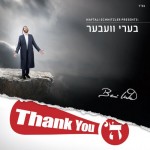 For a long time, I’d see the new Chasidish albums that came out and pass them by. I’d hear from other people that they were wonderful, but hey, I’m not  Chasidish. I definitely didn’t have anything against it, don’t get me wrong, I think I just figured it wouldn’t resonate as well with me, I wouldn’t understand it, etc.  I guess when that changed was when I began working in Williamsburg. I spend the majority of my waking hours right in the heart of the Satmar community. It didn’t take long to realize that despite the different accents and clothing, we really are the same, and there is certainly nothing keeping me from listening to some awesome music. When you put together a beautiful voice, great songs, creativity, and a lot of heart, it’s difficult to make anything but an amazing album. And this won’t disappoint. There is nothing like music to bring a feeling of achdus!

The day after I got Thank you Hashem, I was listening to it on my iPod while going to grab lunch near work. When I muted it to make my order, I heard “Tate” playing loudly over the speakers. That day forward, I haven’t listened to much else because I keep wanting to hear “Sheyibone” ,”Tate”, and “Inenu”.

One thing that does bother me is that there is a good chunk of lyrics I can’t understand. I am working on my Yiddish, but it’s a process. Any Hebrew lyrics I don’t already know I can figure out, but with Yiddish I am sort of stuck.

Anyway, this album is very unique and diverse, but it still keeps a Jewish flavor. It’s not easy to stand out and stay traditional at the same time. There’s a ballads, a Caribbean song, dance music, a fair share of English, Hebrew, and Yiddish, pop, rock, and a traditional niggun modernized. The arrangements and compositions (a lot of big names, and some done by the artist himself which I always love) are creative. Overall, it’s extremely entertaining and enjoyable.

1. Vani Bechadecha (Composed, Arranged, and Choir all Yoel Dikman)
-Powerful and upbeat (1st song after all!)
-Funky with a sort of 70s guitar riff throughout
-Right away, hear his voice is clear and smooth but still with power
-Intro is a bit too long
-Feels repetitive at parts

2. Thank You Hashem (Composed by Lipa Schmeltzer, Arranged by Pinny Ostreicher)
-Almost all in Yiddish, so I can’t understand it, but can guess what it says!
-Very high energy and rock style (with the big band twist of course !)
-It slows down towards the end with a carousel-sound and says “Thank you Hashem” in English, Hebrew, Russian, Spanish, and French. Neat twist.
-Super fun

3. Zechor (Composed by Pinky Weber, Arranged by Moshe Laufer)
-A beautiful ballad which is a great testament to Beri Weber’s versatility
-He sings this one with a lot of love and emotion. You can almost tell what he is saying without knowing the words (I do understand these a lotbetter than the Yiddish)
-I don’t usually like slow songs, but it’s hard to skip this song!

4. Chabadsker Nigun (Arranged by Naftali Schnitzler)
-I have said before I’m not a big fan of niggunim. There are a lot of great lyrics we have to use that have never been used before.
-That said, this is a lot of fun!
-I love the techno music with the niggun– neat contrast of new and old coming together.

5. LChu Nerana (Composed by Beri Weber, Arranged by Ruli Ezrachi)
-Wow, what’s the last Caribbean (notreggae) Chasidish song you have heard? I believe this was a first for me.
-A great, laid back flavor to this one
-Maybe it’s the birds chirping that start off the song, or the Caribbean music, but it makes me feel like I’m on the beach

6. Acheinu (Composed by Bentzy Polotchek, Arranged by Yoel Dikman)
-A slow song, but this one has a lot of power behind it
-I like that there aren’t many musical interludes here… almost all singing
-Shows off his voice very well

7. Inenu (Composed by Lipa Schmeltzer, Arranged by Ruli Ezrachi)
-Does it get more fun than this??
-Hebrew and Yiddish… I can understand this one better than Thank you, Hashem
-Pop style, makes you want to dance!
-Upbeat and catchy — though not super easy to sing along with

8. Esa Eianei (Composed by Beri Weber, Arranged by Naftali M. Schnitzler)
-Another slow pretty song
-Nice, but I much prefer Zechor and Acheinu

10. Sheyibone (Composed by Yoely Polatseck and Pinny Ostreicher, Arranged by Pinny Ostreicher)
-My favorite song on the album, I could listen over and over! And I wish it were longer.
-Alternates between slow, emotional vocals and a super fast Sephardi-ish Sheyibone
-Extremely catchy and has a really unique sound

11. Haneshama (Composed by Beri Weber, Arranged by Pinny Ostreicher)
-This song is Hebrew and English and is yet another creative addition to the album
-Sounds like an easy listening light rock song
-Love that the words start at 0:01!  You know how I am with musical interludes…
-Nice relaxed track that still has a thought provoking message

12. Tate (Composed by David Kaufman and Beri Weber, Arranged by Ruli Ezrachi)
-Wow, interesting choice to end with what is obviously going to be a hit! Leaves you wanting more.
-This is also in Yiddish, of course, but it’s only five words so I got it. It doesn’t hurt that at some point he sings “Oh, Father, help us now…!”
-How does this never sound repetitive? I’m not sure.
-Original, catchy, upbeat….from the very beginning of the end
-Only criticism is that it the pleading message doesn’t seem to match with the fun music