Fortune 500 company Pitney Bowes, a hardware and software company with over 36,000 employees worldwide has chosen to profile young Independent Chasidic Folk-Rock Singer Moshe Hecht to help promote their latest innovative product in a use case video – 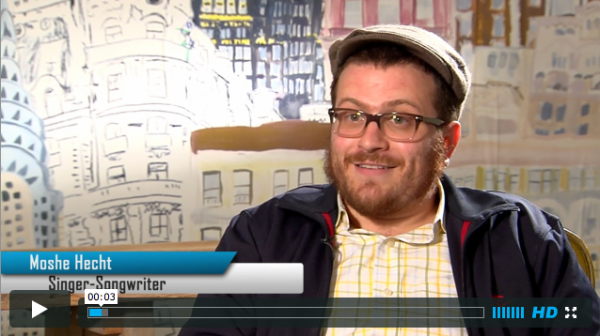 When up-and-coming singer-songwriter Moshe Hecht was looking for innovative ways to promote his new album, Heart is Alive, he came across QR Codes, a bar-code system that allows anyone with a smart phone to interact with the artist on a more personal level. Simply by downloading Pitney Bowes’ QR code, Hecht supplied fans with on the spot downloads, samplers, social media and more. In effect, Hecht’s poster promotion came alive.

When Pitney Bowes was looking for refreshing new artists to promote innovative use of QR Codes, Hecht was their perfect match.

“Moshe’s music, creativity and forward-thinking make such a compelling story that we believe he will inspire other customers to explore using QR codes as part of their integrated marketing efforts,” says Lisa Somer, Senior Director of Piteny Bowes’ Small Business Strategy.

Hecht, who has been touring since the release of his album in October, was very touched that Pitney Bowes reached out.

“As an independent artist, I have to be smart about knowing what tools are at my disposable to spread my music” he says. “And I saw QR Codes as an exciting way to really spread my message and connect with more fans in a truer way.”

As is with his music—which adapts contemporary sounds to evoke age-old ideas—Hecht believes strongly in making use of cutting-edge technology to spread inspirational ideas:

“Here you have a real life example of using modern technology to spread a positive message and inspire people,” he says proudly.

We view him as a successful early adopter of the product,” says Somer,  “Moshe is a shining example of innovative thinking and skillful execution of QR code marketing. He has concrete results that other customers will want to replicate.”

It’s unusual for such a huge company to pick an independent, grassroots artist – especially a Chasidic one – to represent their company. But alas, the times, they are a changin’.