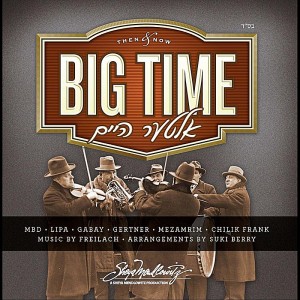 How often can an album be released featuring an all star lineup of Mordechai Ben David, Lipa Schmelczer, Dovid Gabay, Shloime Gertner, the Mezamrim Choir, Chilik Frank and the Freilach Orchestra, produced by Sheya Mendlowitz, and arranged by Suki Berry,  and seemingly not even register a blip on the Jewish Music scene? Then again, with most of the musical focus nowadays on new sounds and styles, this album, Big Time Alter Heim – Then and Now, is one that could fly under the radar, undeservingly so. Set in a wedding type format this album mixes some older classics with some newer classics to make a very pleasant and enjoyable to listen to album. Since, this is not an album with brand new songs (except one) I will not do a song by song review, but will give some highlights of each medley.

Opening Medley (Od Yishoma) – This medley features Lipa Schmelczer, Dovid Gabay, clarinet virtuoso Chilik Frank, and both the Mezamrim Choir, under the leadership of Chilu Posen, and the Moshy Kraus choir. This begins with a couple of classic od yishoma songs. Although I am not a fan of the Israeli “knaytch” on the 1st od yishoma, I still love the song itself. It also features a few classic chassidishe songs, including V’chol Karnei and Tzali Voroini, a favorite of my Rosh Yeshiva’s, a Rav Shmuel Brazil and Regesh classic, Uvo Litziyon, one of Baruch Levine’s nicer freilich songs, Avinu Malkeinu Galay, and ends with another wedding classic, Vayehi Bshurun. Between the songs themselves, the musical arrangements, and the harmonies of the choirs, this is a real solid medley.

Chupa Selections are the next five tracks. My favorites are Mama Rochel, a Mordechai Ben David classic, as Mi Adir, with MBD himself singing, a stirring rendition of The London School of Jewish Song’s B’ein Malitz Yosher by fellow Englishman Shloime Gertner, and another London School of Jewish Song classic, Hamalach, sung to the words of Mi Bon Siach by the Mezamrim Choir. All in all these selections are very calming and beautifully arranged.

Anah Avdah – This is the only brand new song on the album. It is a techno style song, that people who have read my reviews before know is not my favorite style of music. I must say that Dovid Gabay does an amazing vocal job on this song, and the animated video that was created from this song (http://youtu.be/9PWEAQ6RPIw) has been a big hit with many people, including my children and has over 25,000 views on YouTube. A JMR colleague of mine recently told me that for many it was the high point of the album.

Marches- the next medley is a couple of famous chassidishe marches sung by the Mezamrim Choir. This is also a very nice and relaxing listen.

K’neses Yisroel – a beautiful song composed by Shloime Kalish, and with Yiddish lyrics by Lipa Schmelczer, who also is the main vocalist on this song.

Closing Sameach Medley – The last medley on the album is a very interesting mix of songs. It begins with Sameach, which I had only heard before as an Uncle Moishy song, and one that I have always enjoyed. It follows with a Chabad niggun, B’cho Hashem and a Satmer niggun, U’vchein, which Lipa Schmelczer not only sings on this album but also on Non Stop Lipa. Two MBD classics follow, Samcheinu, from his Mashiach album, and a newer classic, Kulam Ahuvim. The medley ends with two older classics Chaim Shetehay, a Moshe Laufer song, and Vosik, a Chaim Banet special. In addition to Lipa, vocals on this medley feature both choirs, MBD, Dovid Gabay and up and comer Shalom Jacobs. The ending on this medley is a classic “back in the day” Suki Berry/MBD ending.

All in all this is a very enjoyable and relaxing album. If you are looking to wax nostalgic and hear what Jewish music once sounded like, I totally recommend this album. It is available at http://www.jewishjukebox.com/products/jewish_wedding_music/2362.asp, at mostly music http://www.mostlymusic.com/big-time-alter-heim-then-now.html, and wherever good Jewish music is sold.