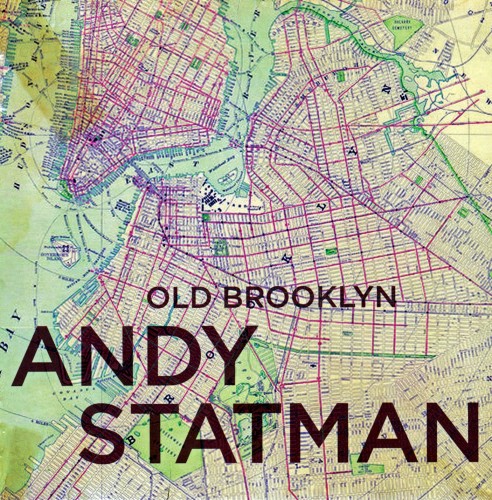 NOTE: I wrote this review before my conversation with Statman himself. That exclusive and wide-ranging interview will be published here as well. But there are a few areas of that conversation that clarify or define parts of the album; concepts that I knew nothing of as a simple listener. So, for insider info on this incredible album, stay tuned!

You open up the package, slip the CD in, and thirty seconds later, your jaw has already hit the floor. If you’re a music junky, you’re probably not going to leave the stereo until you finish hearing both CDs – all 25 songs and 1 hour, 36 minutes worth of top of the line, utterly masterful musicianship. Yeah, Andy Statman’s new album, Old Brooklyn, is just that good. Statman has always been adept at coaxing the most out of both of his instruments – clarinet and mandolin – and here, he’s joined by some of the greatest musical craftsmen in the American music world. (The guest list has so many stars it sparkles.) The sheer joy they draw out of each other is palpable. This double album has got it all: Creativity, tradition, humor, and incredible dexterity in searing solos. This album showcases the work of an all-time master.

The album is mandolin heavy, with just eight songs featuring Andy’s clarinet. That also means that there is less klezmer than bluegrass, and jazz and blues are sprinkled in quite liberally as well. It’s also a very uplifting and positive listening experience, as opposed to the unbelievable intensity – say even thick, Chassidic melancholy – Statman has showcased in the past. Don’t get me wrong – I love that stuff too! But this just has a very different feel than quite anything he’s done before. In fact, you may even say that is more accessible than any of his other albums.

The album starts on a very humorous note, with actor John Goodman intoning, “Oooooold Brooklyn!” That is followed by Bruce Molsky strumming up a storm on his banjo, leading to an insane atonal clarinet jam. That bit of craziness ends 52 seconds in, and the band kicks into the first song – a delightful bluegrass set, which segues into a jazz construct at 3:27. At that point, Jon Sholle kicks in with a steel lap guitar piece that is, well, just really cool. Believe it or not, I think this song has some of Andy’s most readable jazz solos, along with his usual speed demon licks. It’s a solid product, and just a taste of what to come.

My Hollywood Girls takes a song that sounds klezmer (despite the name, you can easily slip some words of Tehillim in, and you wouldn’t know the difference. And if you’re wondering how a frum musician names a song something like this, read the interview that we’ll post soon!) With Art Baron on trombone, it has a klezmer background, but Bela Fleck on banjo and his awe-inspiring plucking gives it bluegrass sensibility. Well, that and Marty Rifkin’s pedal steel guitar wailing. But that one ain’t nearly as clearly Kentucky as the next two numbers, which include Andy playing solo clarinet with Ricky Skaggs singing on The Lord Will Provide. The clash there is unique, what with the authentic deep south and country vocals and the Chassidic/European clarinet. And from that clash to the next, where Andy plays a clarinet solo around a wailing tea kettle.

Zhok Mahoney is reminiscent of Andy’s clarinet work on his previous albums; most specifically from Avodas Halevi. He does with his regular trio, including Larry Eagle on drums and Jim Whitney on bass. They stick with the klezmer/jazz fusion, with Andy and Larry running amok with their unique and skilled power-playing.

Eitan and Zeidy is a real highlight, starting with another jazz solo right out of the gate. Here, he’s joined by Paul Shaffer on the organ (among other things, he’s been the Late Night Show’s bandleader and sidekick for decades), and the two of them plus Jon Sholle on electric guitar have a real blast on another tune that could have easily been a Nigun Simcha or Nigun Rikud. What’s with the cry of “Lost, lost!” at the way end of the track? Two more classic bluegrass numbers are followed by a clarinet solo piece called Life Cycles, which in typical Andy greatness, is as much an expression of dveykus as it is clear and powerful clarinet wailing. Another two beautiful bluegrass pieces finish off disc one.

Disc Two starts with the plaintive Bourbon in Jackson Hole, a clarinet country piece (and, as Andy told me, is a bluegrass rendition of the song Life Cycles – although had he not pointed this out, I don’t know if I would have ever noticed!). While it’s fun in its own right, A Boppin’ Crib forces you to turn up the volume on this old blues-rock style number, as Statman, fiddler Byron Berline, Shaffer and Sholle trade solos. As always, Andy gets the last word in edgewise with another solo played with such reckless abandon it leaves everyone shaking their heads. Anthem is one of Andy’s sweet waltzes that have been a hallmark across his career (the most notable being the classic Flatbush Waltz). And Marty Rifkin’s pedal steel guitar adds a gorgeous twist that makes it a real winner. Waltz for Mom is olde-tyme duo with fiddler Bruce Molsky that’s really sweet, but Ocean Parkway After Dark immediately pulls you out of the nostalgic and gently suggests you move out of the way. Or at least that’s how I read the revving engine and squealing tires that begin this rocker. As far as I know, this song is fairly unique in Statman’s repertoire, as he overlaid his own clarinet over his frenetic mandolin. It works in well, along with the subtle but clearly funky brass section.

Fans of niggunim will appreciate the next two songs, Shabbos Nigun, which I’ve heard sung to the words Sabeinu Mituvecha, and the classic Ashkenazic Mah Yedidus, played with appropriate dveykus and Shabbos-inspired joy. Both are excellent additions to Andy’s Chassidic interpretative gems.

Blues in 3 and The One in Nine are fun lighter pieces, with On the King’s Highway another klezmer inspired piece. Uncle Mo returns us to bluegrass again, while 21st Century Chicken Back Blues is another breezy bluesy piece. The album’s finale is the classic bluegrass number, Long Journey Home, with awesome solos from everyone: Sholle, Molsky and Statman providing a colorful ending.

In a word, Old Brooklyn is brilliant. Andy Statman has pulled off another work of genius to add to his world-class discography. While the bluegrass color certainly drives the album in that direction, there is enough subtle shifting, variety and color here even for those who do not necessarily love bluegrass. But let’s be honest here – you have to at least appreciate jazz and blues along with the bluegrass. After all, this album is the quintessential American music – a melting pot of genres, sounds, sentiment and even religion. And it makes for some delectable results.