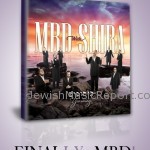 New York – Thirty eight years after the release of his first album, Mordechai Ben David Sings Original Chasidic Niggunim, the man who has been called the undisputed king of Jewish music has announced the release of what will be his final album.

The album, titled Kisufim, is slated to be released on Tuesday by Aderet Music and will contain fourteen songs, including ten new compositions and four old niggunim, two of which date back a century or more and features significant vocal contributions by the Shira Choir.

Werdyger, who composed several of the songs on Kisufim, described this album as having a very different flavor than his most recent hit album, Kulam Ahuvim, whose songs have proven to be a mainstay on the wedding circuit.

“This particular album is a very warm, chasidishe album, something I have wanted to do for many, many years, and I plan to sign off with it.  It is a mix of new material and old nigunim, with original material by Shlomo Yehuda Rechnitz, Yitzchak Fuchs and myself.  I am madly in love with it.”

In an exclusive interview with VIN News, MBD spoke about his decision and the current state of Jewish music.

VIN:  Is this really your last album?
MBD: That is the current plan.

VIN:  Does this announcement mean you are leaving the Jewish music scene entirely?
MBD:  I am only retiring from albums.

VIN: What made you take this step?
MBD:  Putting together an album is too much work. People don’t realize how much goes into an album.  Unfortunately, electronic media has destroyed the CD business and even the biggest secular companies are going under because people just download music they find online.
The way it is right now, it really doesn’t pay to do an album.

VIN: In that case, what does the future hold for Jewish music?
MBD:  Moshiach will come and we will have the music of the Leviyim in the Beis Hamikdash.

VIN:  What are your thoughts on current Jewish music?
MBD: Unfortunately I really have no time to listen and don’t really know what is going on in Jewish music.  I do know that it has taken a completely different direction and Chasidic music is no longer Chasidic music.

VIN:  What do you think is missing in today’s Jewish music?
MBD:  Hartz, which has to be the main ingredient in any album.  If music doesn’t come from the heart it is nothing.

VIN: What do you think is the reason you are still around and popular so many years later?

VIN: Thank you for your time.

A member of one of Jewish music’s most heralded families, Mordechai Ben David’s musical career began when his father, the legendary Chazan Dovid Werdyger, overheard him playing original musical compositions and suggested he record an album of his own, which was released in 1973.  Kisufim will be MBD’s thirty sixth full length solo album, in addition to four singles and having appeared on over thirty five other albums in his very lengthy career.  MBD has become a fixture on the concert circuit with numerous appearances in the HASC concert series and the annual Chabad Telethon.  Many of his classic songs remain as popular today as they were when they were first released years ago.