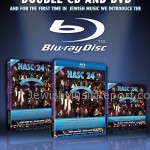 I was never really a fan of Hasc concert cd’s, I preferred my self made mixes of the songs and singers I like over the many performing artists at a Hasc Concert. Listening to Hasc 24 made me see this concert and its music in a different light. The first thing I realized was that although half the energy of the concert gets lost once its on cd, and in no way can you compare listening to a recording of this to being in a packed theater watching the singers live on stage, the album still projects entertainment and excitement to the listener. The second thing I realized was the brilliance it takes in putting together so many singers and all their hits into one.
The concert begins with an Overture by four percussionists conducted by Yisroel Lamm and starts to draw you in to the magic of Hasc and sets the tone for excitement. Its almost as if the blends of the symphony are writing an intricate story without saying a word. Once again Hasc brings all the great performers such as Abie Rotenberg, Avraham Fried, Baruch Levine, Eli Gerstner, Shloime Gertner, YBC, Lipa, and Ohad. I especially liked some of the newer, rising stars like Benny Friedman and Yonatan Sheinfeld. The most pleasant surprise “guest” was the voice of legendary Shlomo Carlebach singing “Am Yisroel Chai” If that song didn’t infuse the air with pounding excitement and love for every Jew, a mission which I believe Hasc shares, then I don’t know what will. If Shlomo Carlebach was still alive today he would for sure be appearing at every single Hasc concert. The sound quality on this cd is so good, you can hear all the “natural” sounds of a concert, the microphone, the orchestra, the audience yet it still has the crystal clear sound of an in-studio record.
Following with the theme “A Time for Duets” you have Shalsheles & Shalsheles Jr singing together, Ohad & Yonatan Sheinfeld, Lipa & Shloime Gertner, and a very touching duet by Avraham Fried and Benny Friedman (uncle and nephew) singing “Lama, Lama ma Nikrah Moriah” and Benny Friedman’s “Ta’amu U’Reu”. By far the funniest part is when Lipa meets Zeidy Lipa who tells him of all the new “advanced technology” of cell phones, and how great it is that Moshiach has finally come and the Levi’im are doing a great job on the singing. Lipa then goes on to sing about the great “kedusha yearning, Torah learning, mitzva earning” and “no more pain, no more struggles” in the times of Moshiach. There’s also another great and enthralling duet by “Yehudah Green and Ohad” singing about “Hinei Yomim Bo’im” the days of Geulah are coming, you can hear how they’re connecting to the crowd saying “its up to you and me”, just another example of what a great concert it must have been.
Although I really enjoyed hearing all these artists mixing and singing each others songs, I think Hasc could do great in the future in getting a few different and more “upcoming” stars, rather than just the same classic singers every year. Don’t get me wrong these people can really “rock the stage” (like Lipa said) but having a fresh voice, a recent singer whose gonna be big, or a new flavor to the music like more Sefardi or Israeli, or more alternative style would spice up the album and would still be able to retain its outstanding reputation of fun for the whole family.
The Finale is spectacular. Spectacular. Again an amazing orchestra, and the very best of Ohad, Lipa, Avraham Fried singing “Neshomele”, “Mi Hoish”, and a soon to be classic “There is so much we can do to make this world, just a kinder better happier place!”