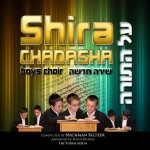 JMR would like to welcome another new writer, Inspiring Voice, to the JMR family!

I see one thing consistent with all of Nachman’s albums. Every time I listen to it I like it more and more each time till I really connect to it. The choir is amazing – the voices, the tons of harmonies, and the range of reaching high notes. This album – Al hatorah has 11 songs and all were composed by Nachman Seltzer himself. The music was arranged by David Epstein.

2-     Ilu Finu – It starts off like just getting in to it, then by the high part the heart really heats up in shvach vihoidoah to Hashem and culminates with the soft “Ilu fe-enu” like someone savoring the opportunity to connect to Hashem. The last part of the song is really shticky with great harmony.

3-      V’yikablu – A real Hartzige song that tugs at the emotions especially with the first solo in the high part.

4-     Toras Hashem – An original hit. Just when we thought after the second part that that’s the whole song, then comes the really high 3rd part that brings it to a higher level in quality and then ends off really high.

5-      Torah Tziva – This song puts me in a good mood. I used to have a chavrusa that every morning before we started we had a ritual to sing Torah Tziva in a fun way that sounds similar to this.

6-     Keser Torah – Nice slow song.  Then comes the best part “ kol me sheyirtzeh yovoi viyitoiiilllllll!!!!!!!” Everyone who wants it can come get the Torah!

8-     Ashreinu – There’s a song from Shmuel Brazil with the same words that is a little similar in the musical intro and low part. I think Sruly Williger also sings it. There’s a song on Tzlil Vezemer #2 – Boruch Hu that has similar style music in the intro but with a saxophone. This is much nicer because of the fiddle. Then it catches me off guard with the choir going much faster the last time around with amazing harmonies.

9-     Shma Hashem –. The words really fit the tune great – a shtarke tefilla. Beautiful “ooh, woo “ part from the choir before the second time around.

10-   Oz Yoshir – Shticky intro with the sound of waves like the Yam Suf by the intro. It has a touch of Jep at the end of the high part. Then you do the opposite from Ashreinu with a slower version. Very hartzig.

11-   The major hisorirus from the album. A great concept of bringing in a chizuk from a speaker. I love the high/low part by the daf yomi on the train. The end is great and high.