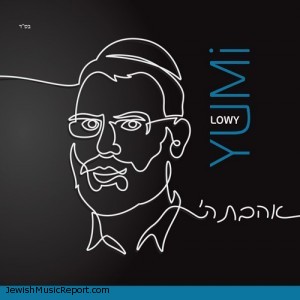 Almost three months ago, a very highly anticipated album was released. Yumi Lowy, a very popular vocalist on the wedding scene on the east coast, released his debut album, titled Ahavas Hashem. Yumi is known for his sweet and smooth sound, somewhat a cross between Yeedle and Dov Levine at times, and his album has been a favorite of mine to listen to. Somehow I neglected to actually sit down and review this album, and it seems to have fallen through the cracks without anyone else reviewing it either. Having listened to it numerous times, I think I am even better equipped to review Ahavas Hashem. Ahavas Hashem is produced by the talented Naftali Schnitzler, and arranged by eight different arrangers, which as I’ve stated before, adds to the different styles found on this album.

Kadosh – A lebedik song to start off the album, composed by famous composer and badchan, Pinky Weber, this song is a pleasant song, and a nice song to begin the album. The arrangements and choir are by Mona Rosenblum, and without even seeing the cover, has his style with the brass lines, and base lines embedded in the song.

Ahavas Hashem – The title track is a Yossi Green composition, and in the Tanya and Aderaba style that Yossi has made so famously. Yossi is also a guest soloist in this song. The musical arrangements are by Yisroel Lamm, and the choir is led by Yoely Horowitz, of the Shira Choir. While the song is a little on the long side, it is a very Hartzige and melodious song.

Moshe Kibel – This is a disco styled horah that combines some techno style music with regular music. This song, together with the accompanying Yiddish lyrics, is composed by Motty Ilowitz. Since I am not fluent in Yiddish, I cannot comment on the content, but this seems like a catchy song. It is arranged and produced by Eli Lishinsky, who also provides the background vocals as well. The song ends a bit too abruptly for me, but otherwise it is a very enjoyable listen.

Yaaleh Vyavoh – This is a hauntingly beautiful and sweet ballad composed by Yossi Green. I love how Leib Yacov Rigler’s arrangements barely have any instrumentation the first time through the song, and even as the song progresses, it still is a very soft an easy to listen to song. Yossi Green once again contributes his own brand of vocals to the song, and Moshe Kraus conducts the choir. There are parts of the song that Yumi’s voice resembles Dov Levine’s sweet voice (and for the record, I grew up loving Dov Levine’s voice and have always been disappointed that he never put out more albums).

Aromimcha – This is a nice enjoyable song composed by Moshe Wertzberger and arranged by Moshe Laufer. The one thing that bothers me about the song is the choir alternates between pronouncing avaricheka (correctly pronounced) and avarichecha.

Ten Lo – This is a Middle Eastern style horah, where Yumi sings with an Israeli accent. The song is composed and arranged by Ruli Ezrachi, I personally like when the composer is the one who also arranges the music because then the full flavor of the song, and the intent of the composer really stands out. I really like the spots in the song where Yumi harmonizes with himself.

Ma Nomar – This is a beautiful and hartzige song composed and arranged by Eli Laufer, who also conducts the choir as well. It has already been documented how the apple doesn’t fall far from the tree, but this song is but another example of Eli’s talent. I think Yumi does a great job on the high notes and his background harmony on this song, and it actually highlights his range and sweet voice.

Pen Pen – This is another song composed by Yossi Green. This is more of a swing style song, and not one of my favorites. Besides Yossi’s vocals, this song has his style all over it, and fans of Yossi Green are sure to be all over this song. The arrangements and choir are by Mona Rosenblum on this song as well.

Eishes Chayil – This is another beautiful and hartzige song composed by Pinky Weber. It is arranged by Moshe Laufer and the choir is conducted by Moshe Roth.

Umipnei – Usually an album will try to end off with a bang and a lebidik song, but in this case, I think the perfect song to end off with is Umipnei. This is another hartzige slow song, which is really easy to listen to and once again, shows off Yumi’s sweet and smooth voice. The song is composed by Benny Hershkowitz, and arranged by Dudi Kalish & Ruli Ezrachi, with Dudi also conducting the choir.

In conclusion, this is a very enjoyable album to listen to. I found it to be mostly relaxing, and it has been on repeat for me for all this time. If you haven’t already gotten “wired”, my recommendation is to purchase this album as a download or a CD available at Mostlymusic.com (http://www.mostlymusic.com/ahavas-hashem.html) or wherever Jewish Music is sold!