Hislahavus’ Review of the HASC Collection – 1-7 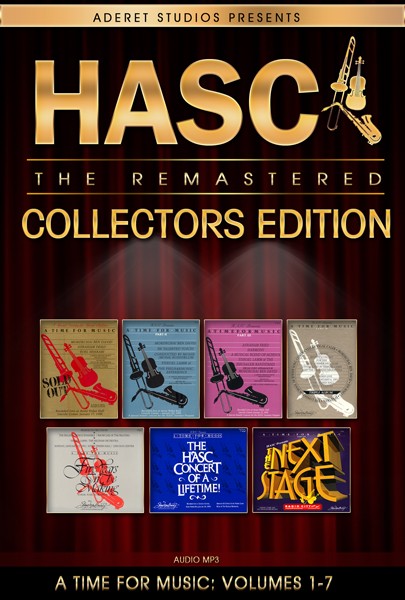 It is worthwhile to flashback sometimes. When you haven’t listened to something for many years, you may be missing something that you hadn’t noticed. So it’s flashback time: I do not think it would be an exaggeration to say that HASC’s A Time for Music series of concerts changed Jewish music forever. Over the years, they produced novel musical introductions and defining moments, and helped establish the Jewish music world. And now HASC has done us all the favor, rereleasing the first seven concerts in one MP3 set – 115 songs (!) of some of the best music we have witnessed on stage.

More importantly, it’s been remastered. And the sound is very clear. This is important when you consider the beauty of a 60+ piece orchestra, alongside artists such as MBD in his prime, Avraham Fried on his ride to superstardom, and others. And consider the many gorgeous instrumentals by the Neginah Orchestra with the likes of Yaron Gershovsky and Yossi Piamenta. Much of that is thanks to Yisrael Lamm, whose orchestrations are what make the concerts what they were. In fact, I’d venture to say that his best work is featured in these concerts. But the artist whose presence made those HASC concerts so special is Mordechai Ben David. During those years – especially the first three – his vocal ability was at the top of its power, and that regal voice and deep emotion still remains an impossibly high benchmark for all newcomers to the Jewish music world. In addition to all that, Abie Rotenberg’s stirring songs written specially for HASC (Who Am I, Small Piece of Heaven, Candles, Hamalach) are all particularly noteworthy.

The only negative side to the collection is that they repeated songs from one concert to the next – Yidden is sung three times, Someday three, etc. But that’s only a disadvantage if you listen to the entire thing straight – as I just did.

Of all the concerts, the best would have to be no. 5 – MBD with the Regesh Chorus Ensemble, along with the Showcase of the Masters, including spots by the Piamentas, Gershovsky, and trumpeter Yaakov Uriel. While I do not like listening to Yeedle’s Reminiscing Medley or MBD’s History Medley – they’re simply too shticky to enjoy two decades later – the rest of the concert is full of class and style; and for the most part, absolutely heavenly music.

Here are my favorites, album by album:

Tatenyu is a truly beautiful song, and I always loved this hartzig version better than the original. (I’m not alone in loving this tune – no less a personage than the Lubavitcher Rebbetzin, Rebbetzin Chaya Mushka Schneerson OBM, deeply loved this song. A close friend of hers once walked into her home while she was lighting Shabbos candles and found her deep in concentration, singing this song softly to herself.) Let My People Go is an all-time classic, and MBD really rips it out. And finally, MBD and Fried singing together has always brought out unique emotional energy from both of them.

HASC 2: 101 Talented Voices, MBD’s English Medley, Ribono Shel Olam and Who Am I

In this concert, they picked up the quality of the arrangements with some real symphonic sound and a massive backup choir, called 101 Talented Voices. This concert’s real highlight is without question MBD’s stunning rendition of Mona’s classic Ribono Shel Olam. MBD’s English Medley is also really beautiful – what with great arrangements and MBD’s voice in tip-top shape. Abie Rotenberg brings the crowd to their feet with his emotional debut of Who Am I. And that’s a song that brings chills every time I hear it.

HASC 3:The Jerusalem Bandstand’s Hora Medley and the Rhapsody in the Shul

While Fried stars in HASC 3, I’m not crazy over most of his medleys. In this case, my ears were tickled by Yisrael Lamm’s big band work on the Hora Medley and Rhapsody in the Shul.

I always loved what the London School of Jewish Song did here, but let’s face it – their medleys all went on for too long. In fact, all the medleys on this concert went on for too long, despite the fact that there are many beautiful moments. Ko Amar, though, is an old classic, and was a real crowd pleaser. In addition, MBD stirs the strings of the soul as he belts out Yerachmiel Begun’s Refaeinu– far and away better than the original. And the too-short appearance by most of the cast of Journeys is truly wonderful – their perfect harmony blends splendidly with the sounds of the full orchestra. What makes this a true highlight is when you compare the arrangements with their original albums. Those early Journeys (and D’veykus) albums are austere, to say the least. So here, they finally get the stunning arrangements that they deserve.

HASC 5:The brilliant instrumental section Showcase of the Masters, MBD’s belting Simcha Leartzecha and with Regesh on Slach Na and Ma Ashiv

The first half of this concert was unbelievable – the phenomenal Showcase of the Masters featuring Yossi and Avi Piamenta (seperately), each with a unique twist on a classical music piece; Yaron Gershovsky creating a gorgeous piano concerto off of Abie Rotenberg’s classic Hamalach; and Yaakov Uriel, a trumpeter whom I know nothing about, blasting out the fun and funky Moosh Suite. But let’s not forget some more MBD all-timer moments – particularly on Shlomo Carlebach’s Simcha Le’artzecha, and with the Regesh Chorus Ensemble on their classic Selach Na, as well as Ma Ashiv. This concert had some serious music going on. Lots of four and five star marks in my iTunes ratings!

It seems like #6 was a bit of a let down, but it has its moments as well – specifically, the gorgeous Vaani Tefilati sung soulfully (!) and played stirringly by the brilliant Yossi Piamenta. Who knew Piamenta could let go with such plain emotion on such a simple song, and one that is not a pure guitar song? Credit is certainly due to the stunning accompaniment by the Neginah Orchestra. And MBD’s performance of Ko Amar, with composer Chaim Banet sitting at the piano, is his typical soulful self.

HASC 7:The crooning Mimkomcha, and Statman on the Spanish Rhapsody and in the Wedding Medley

An attempt to go Broadway seemed to flop, but we got some decent music out of it. Specifically, another MBD/Neginah Orchestra number baked to perfection – the oldie Mimkomcha. We also have the appearance of a true master, Andy Statman, on the woefully short Spanish Rhapsody, and his wailing clarinet solo during Miami’s Chelm Wedding Medley.

This collection is simple a must-have for any Jewish music collector. And at $25 for the entire collection (i.e. .22 cents a song!), or even better – $20 for the download, you cannot go wrong on this one. And sign me up for the next such collection, of vols. 8-24!