Leiby: Yosef Hatzadik in Our Times (A Capella) 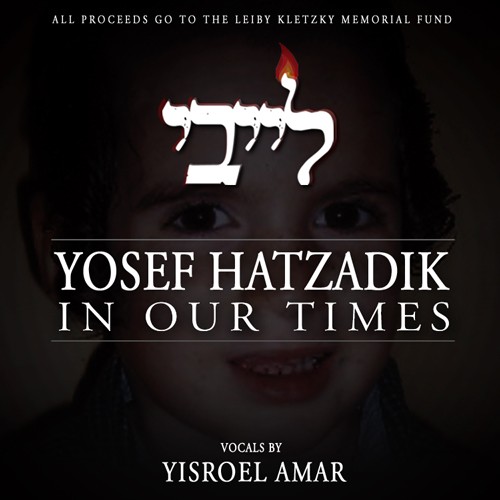 Donate 99 cents to The Leiby Keletzky Fund by downloading the song on MostlyMusic.com– Link: http://www.mostlymusic.com/yosef-hatzadik-in-our-times.html

On July 12 2011, Leiby Kletzky (OBM) was tragically taken from our world. Since that dark day, it has been simply impossible to carry on “business as usual.” Though time passes, our souls are restless as we try to find a reason and comfort for Leiby’s death. As a rabbi, I grapple with the questions of how to approach and console the family that actually lived through this event and what message I must give my community.

As these questions consumed my mind, it struck me that this event parallels what happened to Yosef Hatzadik at age 17, when his father, Yaakov Avinu, sent him on a mission to inquire about his brothers. Yaakov sent Yosef on his journey with a deep feeling that his son had to fulfill G-d’s decree (as Rashi explains on this verse)
Like Leiby, Yosef wandered in the fields and never returned home, and Yaakov was presented with “ketones Yosef,” his son’s fur coat, torn to pieces. To which he answered “tarof toraf Yossef” an evil beast has taken my beloved son. During Yosef’s entire absence, however, Yaakov, “va yimaen,” refused to accept consolation for his son’s death.He never Gave up on Yossef.
The last topic that Yaakov and his son learned together was that of the “eglah arufah,” the laws that describe how a calf must be slaughtered when a corpse is found on the borders of two cities. It is explained that the rabbis would come down from Jerusalem to measure the distance between the two cities, and would spill the blood of a calf saying, “Our hands haven’t spilled this blood.” For us, the message is clear: just as the rabbis were made to accept responsibility for an unknown death, so too must we all take responsibility for one another.

For two days we, and how much more so Leiby’s parents, lived in horror of not knowing where Leiby was. Yaakov lived this nightmare of uncertainty for 22 years!

For this period far from his beloved Father and any Jewish environment Yosef was able to resist the seductions of Egypt ” the nakedness of the land” and the advances of Potiphar’s wife. A chassidic masters explain that Yosef’s ability to resist,“va yimaen”. came from Yaakov’s resistance to be consoled.

The story of Leiby is a story of our own children roaming the streets of this dark world, prey to the it’s challenges as well as it’s physical and spiritual dangers.

Our duty together, regardless of religious beliefs or level of observance, is to look out for that lost, wandering child and extend a helping hand to him or her.

The circumstances in which Leiby was taken away from us are insane and below any sense of logic whatsoever.
We need to answer this tragedy proportionatly , in terms of our connection with G-d and our fellow brothers, by doing unwarranted acts of goodness, kindness and love that simply surpass logic and reason. In these times there is no place for false modesty we must leave our comfort zone to reach out, help, and care for one another whatever our denomination or spiritual level.

Years ago, after a tragedy happened in the community, the Lubavitcher Rebbe, said that we should not find comfort in this exile.
The only comfort we will accept is the gueula Shelema !

Yosef’s story ended on a much more positive note than Leiby’s. He was reunited with his father and brothers. Yaakov, however, was in disbelief that his son was still alive and well. As a testament to his father, Yosef sent his brothers back to Yaakov land with “agalot” (wagons) filled with goods. The “agalot” indicated to Yaakov that his son remembered that last lesson they had learned together, because it is connected with the word, “agalah.” This served as a testament to Yosef’s physical and spiritual well being, and revived Yaakov. After the reunion, Yosef explained to his father and brothers that the entire circumstance—whose end result was to prepare for the nourishing of the Jewish people during their stay in Egypt—was G-d’s master plan, and therefore impossible to fully understand.

Leiby too has left us in the most tragic unanswerable way and certainly stands before the Kiseh HaKavod to prepare the ground for the revelation and coming of Moshiach. This time, however, let him not be alone in his cry; let’s cry to Hashem with him. Let’s cry that He finally redeem us and put an end to this bitter exile by revealing Moshiach Now!

My son you must leave
You brothers you will see
And beshalom come back to me
His first journey alone
Away from his home
Leaving, his future is unknown

As the day passes on, he awaits his return
For my son oh my son I cannot mourn
Feeling a loss so strong
He desperately does long
For an answer, for a reason
Oh Father I seem far, my journey just began
To help my brothers from where I am
Hashem’s plan you can’t see
But for you I will be
In a foreign land, awaiting…

Tragically, in our times,
A sweet boy of nine,
Decides to leave his mother’s side.
His first journey alone
Away from his home
Leaving, his future is unknown

As the day passes on, they await his return
For leiby, oh my son I cannot mourn!
Feeling a loss so strong
Desperately we long
For an answer, for a reason
Yidden I may be far, my soul up on high
To beseech our father in heaven
Hashem’s plan you can’t see,
But with you I will be,
The geula, demanding!