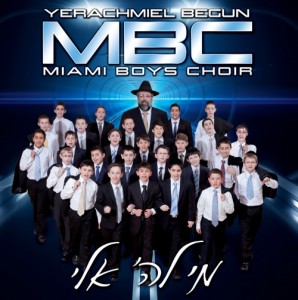 This is embarrassing to admit, but until now I never had a Miami Boys Choir CD. I’m still relatively new to the Jewish scene having listened to it for about three years now. I’ve been listening to their songs on Jewish radio and on YouTube for quite some time now, promising myself that I’d get their next album. So, now that I’ve gotten the chance to sit down and listen to Me La’Hashem Ailai it’s easy to see what all the buzz is about and how Miami has remained at the top of the charts for so long. But, of course, I’m not able to compare this album their others. If you are a fan, I recommend listening for yourself and making the comparison, because regardless of how it stacks up it’s very good!

Every singer has a different voice, every composer has a different style, and thus every choir has a different sound. But MBC seems to really have a signature sound. It’s something about the way the boys sing.. I don’t mean that they have great voices, which they do… but they sing in a particular style that you will understand if you hear an album, and it must be that they are trained to sing that way. It works wonderfully. I really can’t put my finger on it, but I think that throughout the years they have, while updating somewhat with the times, stuck to their style. I know I’m not able to completely honestly say that, but from what I have heard, I can always tell it’s one of their songs.

Yerachmiel Begun (and his wife, Shoshana) have a special way with English lyrics that you rarely hear in Jewish music. I feel like they are too often excessively cheesy and sound awkward for the sake of rhymes. Well, of course, that’s not the case here. Both English songs easily hold their own amongst the Hebrew and bring beautiful messages.

I love this CD and think all of the hard work and dedication evident has really paid off. The album has what I expected: incrediblesolos, great composition, some fun songs and some moving songs, and a few excellent Hebrew songs. My favorites are Vtahair, Me La’Hashem Ailai, Melech, Hatov, and Ad Musai… I’ll have to stop there for now!

This is a powerful song to start off the CD. It has an exciting feel to it, for lack of a better word, and the chorus is a lot of fun. All through the five and a half minutes the song keeps you going. Great song, sort of sounds like an anthem for the album.

It took over a minute for this song to get started, but once it does, it’s full of great messages that are sure to lift you up and show that you no matter what is going on, Hashem is always with us. My favorite part is, when after discussing Moshe Rabeinu and Matisyahu it’s brought back to today–talking about money, music, economy, etc., and it’s easy to relate to. Every generation has it’s struggles and this is a beautiful uplifting perspective on things. I love this song, and at almost 7 minutes, I don’t want it to end. Here’s the English hit on the album.

Here’s the first slow song on the album, and it’s full of amazing solos. I love when the tempo picks up around 2:35; although the solos are almost all over by then, the choir also sounds great together, especially in the hushed tone that they finish the song out with.

Back to a fast song! The boys sing these solos with so much kevuna, it’s amazing. I can almost picture them singing. Around 3:15 it slows down a bit and the tune changes; I love this part (even though I usually prefer when songs speed up, but don’t worry, it comes back!) Definitely one of my favorite songs on the album!

Another great fast song , though not as fast as Vtahair, it’s more danceable! This song has a lot of nice but subtle harmonies throughout. I like that they are subtle and I didn’t even notice them, but they obviously change the song a lot. Harmonies, especially in a big group, risk getting messy, while here they sound like nicer music!

Another slow song, and like Yosis you get the quality solos you would expect from Miami Boys Choir. This song was too long for me, though, at over 7 minutes, even with the excellent solos and harmonies throughout. If they cut out some of the musical interludes, which are plentiful, it could be significantly shorter and I’d enjoy it more.

I really like the English and Hebrew mixed together that Miami seems to do a lot. This song has a techno/disco-esque feel throughout, and is really the only song like that while that style seems to be very prevalent today.  The song is about waiting for Mashiach to come and I must say that, words aside, there is definitely a sense of urgency and optimism throughout. Fun song while still serious enough for this topic, and I really like it!

And we return to slow songs for this one, with some beautiful violin in the background. Of the slow songs, this is definitely my favorite. I love the melody and how much feeling it is sung with. It also has less musical interludes that the other slow songs and the length is just right. Overall amazing song! Beautiful!

This is a upbeat and fun song with a funky sort of jazz feel. For the vast majority of the song, the whole choir sings together, though there are some good solos in there of course. This song will keep you moving the whole time and is overall very enjoyable to listen to.

This is a wonderful slow song that tugs at the heart strings. For me, it is still too long, at 6:43. There are few songs I can listen to for that long. It is very pretty and composed wonderfully, but I would have preferred if it could be, lets say, 4:30 instead. Still, very good song and listen for the duet which I really love!

This is the shortest song and I wish the singing got started before :40 … especially since this song is great and the end leaves me wanting more. It’s got a more serious feel to it and I love love love the chorus. Most of us know what these words mean, but I feel like if someone didn’t, you can almost figure out what they are saying from the sounds of their voices and the music. Excellent song, but I wish it were a little longer!

Here’s the debut of the Miami Boys Choir of Israel- Miami East! This is the same song that we heard before, except obviously sung by other boys and it’s all in Hebrew (and real Israeli style… I can’t understand it! Good thing we have the translation in track 2!!) These boys have really amazing voices, and it is nice to hear an Israeli choir which is something different these days while still having the signature Yerachmiel Begun style. Very pleasant to listen to and I hope that we hear more from Miami East soon. Debut album maybe?

Overall: I’m thrilled I finally been ablee to hear a Miami album in it’s entirety. It’s a very high quality album and I hope you enjoy it.