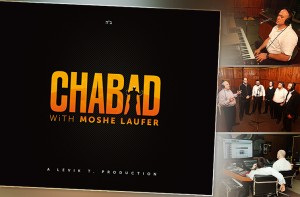 50 musicians, 3 years of work, 4 singers and dozens of vocal and Kids choir. This summarizes one of the most spectacular musical projects in Jewish music. Entitles, “Chabad with Moshe Laufer”, the new album which its producers describe as “unprecedented”.

The album takes Moshe Laufer back to his early days, 30 years ago, when he produced his first Chabad music CD. Laufer is a legendary composer, conductor and arranger, who recently was the recipient of the prestigious ACUM music award. In this latest work, he presents a up-till-now unsuccessful endeavor, bringing together the sound of modern music and Chabad’s authenticity and sensitive touch, creating a fusion in which neither end is jeopardized.

The last ends are being tied together, ahead of the album’s release. In the final masterpiece, which was produced jointly by the finest musicians, is conducted by Eli {Ilya} Lishinsky.