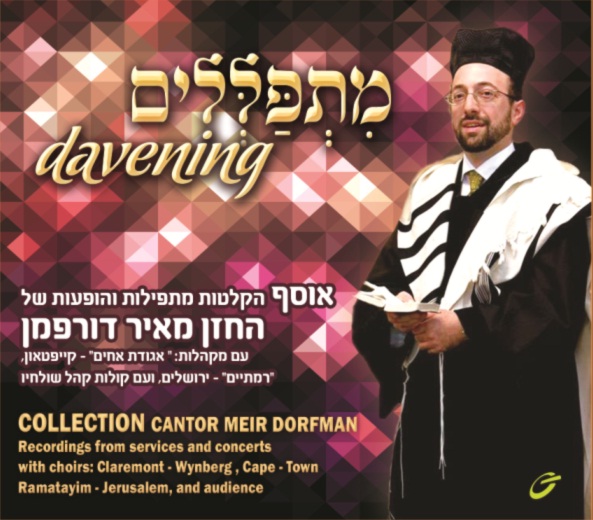 Meir Dorfman has served as a chazzan for almost two decades in Israel and throughout the world. In addition, Dorfman studies in a kollel, learning Torah and participating in various fascinating kiruv initiatives. Congregations where he has served as chazzan have come to appreciate his unique abilities producing music from the very depths of his heart that inspires the soul with the purity and power of his davening. Dorfman, a musician and composer who has played the piano since childhood, did not gain his knowledge in music schools such as exist today. He insisted on taking the more difficult path, and so was privileged to study with the top chazzanim, music and voice production teachers, thereby developing a voice which is outstanding in every way. This in addition to the glorious ancient nusach in the Lithuanian tradition which he received from his father, Dr. Moshe Dorfman. “Chazzanut and music have the power to draw hearts closer and make the chords of the soul quiver, enhancing the feeling of standing before Hashem. All this takes place more readily in shul amongst a congregation each wrapped in his talis, than at a grandiose concert with numerous musicians. Even when chazzanut steps up on stage, its purpose is to bring the shul there, and not the opposite, heaven forbid.”

In the course of his years as a chazzan, Dorfman has assembled a variety of unique recordings. In addition, he has founded many cantorial choirs in Jewish communities throughout the world, which have accompanied him. Several such prayer compositions have been recorded in the studio whilst managing to create the atmosphere of a shul. His brother, Ariel has brought all these recordings together in a unique collection titled “Davening”. “I looked specifically for pieces recorded at live performances or similar to that, which to me are preferable to studio recordings”, explains Ariel Dorfman, the producer, “despite the amount of work entailed in bringing some of the pieces to the required technical standard, as this enables the feeling of actual davening to be conveyed to the listener, as if he is standing with the chazzan, before HaKadosh Baruch Hu.…”
Meir Dorfman’s voice can be heard not just when lifted in prayer. Every week he gives lectures at a workshop in authentic Judaism aimed at the population of Tel Aviv. This is a musical – emotional – spiritual journey starting out from the week’s parsha via Hebrew song, midrash, the Zohar on the parsha, Chassidic stories, psychology and more, while utilizing the unique power of music. The “Davening” collection contains three albums – for shacharit, maariv and for the yamim noraim.