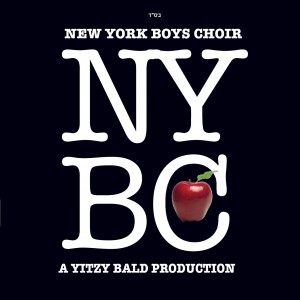 I’ll say it straight out- many of you will completely disagree with this review. I already know that some of the songs that I’m going to say didn’t do it for me, are other people’s favorites. That being said, please feel free to comment and tell me where you disagree- I like hearing other people’s opinions, as well as your criticism. Please keep it up!
Ok, so NYBC…personally I wasn’t so excited for a new boys choir. However, after listening to this album quite a few times, I must admit, I was quite impressed. I know it’s a few months after the album came out, but I couldn’t really do this before Lag Ba’omer, and didn’t get around to it before Pesach. Before I get to the song-by-song review, I’ll come clean and tell the you the few things I disliked about the album. Although it is really a very good album as a whole, I have to warn you that I’m not a huge fan in general of boys choir english songs (some old Miami songs are definitely exceptions to this rule!), as well as boys choirs singing with Israeli accents. Other than that, the only ‘flaw’ that I found in the album was that there seems to be very little bass guitar in it (if any at all). Although many people don’t even notice that, it’s a personal pet peeve of mine, and I therefore felt that the lack of it detracted from the overall sound of this album. On the plus side, the musical arrangements are quite heavily guitar based, and they did do quite a good job with that. Also, the choir arrangements are amazing. Although a few of the songs struck me as needing more words as opposed to repeating the same ones so many times, the songs are nonetheless enjoyable to listen to over and over. Lastly, I appreciate that the songs are well-timed, meaning that they don’t shlepp on and on when you feel they should have already ended.
Directed by Yitzy Bald, and arrranged by Yitzy and Nochi Krohn, NYBC is a very good album with a very nice variety of songs. The songs range from pumping fast songs that will probably be playing in camps across the country this summer, as well as on camp videos, fun songs which are guaranteed to please most. There are also some beautiful slow songs, which were already hits when Yitzy’s choir performed them in Camp Agudah. I spoke to someone I know who was in one of those choirs, and he told me he enjoyed the songs so much he still remembers them to this day, and was thrilled to hear them once again on this album.

Track #1- Ma’aminim: Aaaannnnnddd off we go! Straight out of the gate, first up is Ma’aminim Fast, catchy, starts right with the chorus and is followed with a solid guitar intro…very good song! Additionally, the choir arrangements are great, with well spaced solos. This definitely has an effect on the overall catchiness of a song, and on this one it really does the trick. A great start to a really good album! 4 stars
Track #2- Libi: This is the first slow song on the album. It’s a really nice song, with words from one of the kinnos that we say on Tisha B’av. Although I kinda wish it had more words,….well, either way it’s a really nice song so I shouldn’t complain! I also particularly like how they did the ending on this song. This is one of my favorite songs on the album: 4 ½ stars
Track #3- Elah: Elah is probably the catchiest song on the album. Although it didn’t quite do it for me, one it got stuck in my head (for around three days in a row!!) it really grew on me. Of all the songs on this album, Elah is the most likely to have you singing along no matter what it is that you’re doing. Although the worsts seem slightly out of place, this song is extremely catchy, and hey- poetic license! Elah Elah Elah Hakadosh Baruch Hu!! 4 ½ stars
Track #4- Chessed: Here we are. Chessed is for sure my favorite song. A Camp Agudah classic, I’ve been hearing guys singing this song throughout the halls of Yeshiva for a couple of months now. The song has a great cresendo following a nice musical piece (although that does remind me somewhat of the english song on Shlomie Daskal’s Poseach Es Yodecha), after which we even hear Yitzy Bald himself softly finish off the song. It’s a great song, arrangments are great, and definitely my favorite on the album. 5 stars
Track #5- Al Hasulam: Back to fast songs- Al Hasulam is another ‘fun’ song which I’m pretty sure everyone loves (except for me of course!). The song is about building ladders of song to ascend to the Heavens; it’s based on a teaching of the Piaseczna Rebbe, Rav Kalonymus Kalman Shapira ZT”L that “A person must build ladders for himself upon which to ascend to Heaven. Song is one of those ladders.”: I didn’t enjoy the accents on the Hebrew, nor the English lyrics, but it’s really quite a catchy song…on second thought, as I listen to it again now, this is a pretty good song! 3 ½ stars (yes, I know many of you will say this should be a 5star song- please leave comments! :))
Track #6- V’ahavta: This intro sounds quite familiar….I have a feeling you may be hearing some variety of this intro at chasunahs every so often ;) Either way, it’s a very pumping intro, which is also nicely incorporated into the chorus near the end of the song. V’ahavta itself is a very pumping song, which is largely due to the guitar line. Nice double-ending, although not entirely ‘necessary…4 stars
Track #7- Riding the Waves: As I said before, I’m not a big fan in most of the Boys Choir english songs. Riding the Waves sounds like it may have been a color war theme song once upon a time. It’s a song about Emunah, that Hashem is always there with you, even when things are looking a little down, and he can help you Ride the Waves to the other side. I’m biased (although I do admit that it’s a nice song), so I’m not going to criticize, or pass judgment….next song please?
Track #8- Ten: Ten is a fast song, and it strikes me as a Yeshiva Boys Choir-ish song, with a splash of Shira Chadasha Boys Choir thrown in for flavor. It’s a good song, but not one of my favorites. 3 ½
Track #9- Galey: Galey is a nice song, and a tefilah to Hakadosh Baruch Hu to help us, His children, when assistance is needed. I particularly like the arrangements in this song. They’re nothing fancy, but very well done. Good song; 4 stars
Track #10- M’loich: It could be just my imagination, but the intro to M’loich reminds me of the Muppets for some reason….followed by Ein Kelokeinu from the first Shira Chadasha Boys Choir album. Well either way, it’s a pretty good song, with a solid drum-line and guitar throughout. 3 stars
Track #11- Chalomos: Chalomos is a beautiful song which Yitzy Bald dedicated to his mother A”H (who used to always wish him chalomos ne’imim, sweet dreams, when he would go to sleep). The words are based partially on the Kinnah that we say on Tisha B’av, which compares the simcha while leaving Mitzrayim to the sorrow when we left Yerushalayim. This song discusses sweet dreams of returning once again to Yerushalayim and the Bais Hamikdosh; it ends of with saying that when Moshiach will come, gladness and joy will replace the anguish and pain of exile. It’s a really nice song, on of my favorites. 4 ½ stars
Track #12- Yehudi: As I said previously, I’m biased against songs with kids singing in Israeli accents, especially when it sounds fake, so I’m declining to comment on this song. Sorry.

All-in-all, I found NYBC a very enjoyable album to listen to. Of all the albums that have come out in the past couple of months, this is so far my favorite. I hope you enjoy it as much as I did! Please feel free to comment on this, and share your opinions. I will try, bli neder, to get back to all of you!