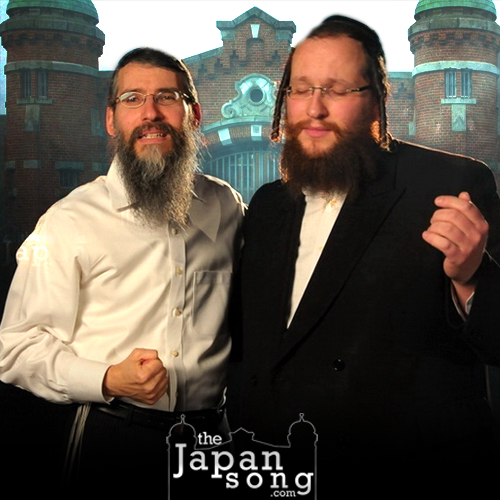 You can download the track for 99 cents by going to MostlyMusic.com, all proceeds will be going to help this group.

Brooklyn, NY – In an effort to raise both funds and awareness for two Israeli young men who are still being held in a Japanese prison almost three years after unknowingly bringing drugs into the country, Danny Finkleman, producer of the Unity project to benefit Sholom Mordechai Rubashkin, has created another stunning music video, this one featuring two of the top names in Jewish music, superstars Shloime Daskal and Avraham Fried.

The Japan Song is a remake of the Dveykus 2 classic, In A Vinkele, later re-recorded as Tatte by Yaakov Shwekey, featuring all new lyrics by Moti Ilowitz and Moshe Kravitsky in both English and Yiddish. Filmed on two continents, much of the footage for the moving video was filmed at the Chiba Detention Center where the two are being held, only days before Japan was devastated by an earthquake-tsunami combination that claimed the lives of thousands.

The seven minute long video describes the plight of Yoel Zev Goldberg and Yaakov Yosef Greenwald, who are imprisoned in Japan after suitcases that they were carrying for someone else were found to contain drugs. The two, who passed polygraph tests, have long protested their innocence and a third young man, Yosef Bando, has already been released. Produced and directed by Finkelman in conjunction with Teltech Entertainment, The Japan Song is sponsored by the Aaron Teitelbaum Orchestra and Hitech Merchant Services, with musical production by Eli Lishinsky and Nir Graf and cinematography by Mauricio Arenas and De Grupo Films.

While filming in Japan, Daskal and Finkelman had the opportunity to spend thirty minutes with each of the two young men. Meeting them and spending time at the Chiba Detention Center left Daskal and Finkelman feeling even more inspired than ever to do whatever they could to help the pair.

“While I was impressed with the good nature of the Japanese people and their respect for us as Jews,” said Finkelman, “it was heartbreaking to realize that despite the fact that these two young men are imprisoned just a few feet away from each other, they are kept separated and have not spoken to each other for almost three years. While so many of us pray for the welfare of these two young men, it is important that we remember them both with prayers and the donations that are so desperately needed to fund their defense.”

Donations can be made at TheJapanSong.com, which also features the actual music video, song lyrics, information about the case and pictures of both the Chiba Detention Center and the recording sessions in both Japan and New York. Contributions can also be mailed to Ezras Rayim c/o Japan Boys, 17B Cedar Lane, Monsey, New York 10952.