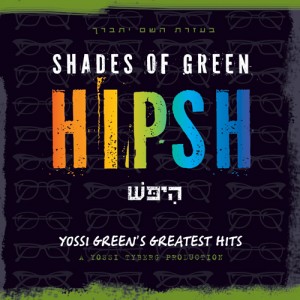 There are few albums that I was looking forward to review more than this one! Yossi Green is the foremost and most respected name in the Jewish music composing field. The Shades of Green series is a real testament to his ability to compose in specific styles and genres. One thing about this album that appeals most to me is the way that the songs are arranged in a unique way that the style the song was composed in is emulated and stressed to the point of obviousness! This could not have been done without the skills of Yisroel Lamm, who did a phenomenal job at this. More to come…

When listening to the original Shades of Green, I was of the opinion that maybe there should have been guest artists singing the songs. Now that I heard the second album it is clear in my mind that Yossi is clearly the voice needed for this album. If there were other vocalists, you would lose that unique specialized style assigned to every track. And while the lead vocals take some getting used to – it becomes quite enjoyable throughout the album.

Shades of Latin – The moment the song starts you hear the latin percussions really bringing the Latin vibe… One thing that really got me thinking is that you hear very clearly that the songs are all arranged differently than they were on the original album. I am not sure if this is to try to get them to fit the featured genre, or this is the way Yossi originally wrote it. Either way I actually like the Ki Hatov better when it is arranged with less of a heavy middle eastern feel (as it was on Shwekey’s album). The second song sounds a little rushed in the new tempo.

Shades of Motown – Love the opening groove. I guess this is what a Jewish Motown sounds like because I’ve heard some real motown and umm it wasn’t exactly like this. Maybe when the Wurlitzer kicks in I start feeling it! Either way the bass is what really gets a motown going and a more intense line probably would’ve done the job. The combination of songs is really a fun mix.

Shades of Dance – As soon as you hear the opening trance you can almost feel a Gertner song coming – and he doesn’t disappoint! This is like what you would expect from a remix and it is amazing! The vocals are superb and not overpowering. There is a long long interlude (maybe too long) and then we move onto a Wald song that was a real jump in those days!

Shades of Hipsh – Well now that we know what Hipsh means (see a few articles earlier) we can skip talking about the word (for now). The funky sound that Yedid takes on on this track is almost worthy of being released as a different version of the song! The arrangements are really fun also. I can almost imagine what the sessions were like!

Shades of Rock – Here you see the proper tempo that rock songs were written in. I’m pretty sure that the songs were sped up before they were put onto the eventual artist who bought the song. This is great opportunity to mention one of the greatest treats for me on this album is getting to hear songs that I never knew were Yossi’s. Wow Im ein ani li, an oldie but goodie – enough said. Amazing variation at 3:40…

Shades of Baroque – For those who don’t know what that weird word means – Baroque was one of the styles popular in Classical Music composition during certain periods (1600s-1800s ?). I was talking music with Yisroel Lamm a while ago, when he expressed his particular enjoyment with this style. So I can imagine he had something to do with this :-). Either way Chesed V’emes and Tzama are both true masterpieces and really underrated songs, hopefully this will get the songs out there a little more. The musical interludes are also really amazing. GREAT TRACK

Shades of Debka – I really don’t enjoy Debka too much in general but the vocals on the track are great. I don’t feel this one as much as I should…

Shades of Blues – Blues is a difficult genre to tackle. And I think the intro sort of avoids it in general but then the low part gets a little closer to the real thing. This is the first song (Ani Maamin) on the album that I don’t know its origin, anyone out there please help?

Shades of Soul – This song put a smile on my face. The arrangements are really great, and really stick to the genre even though the song itches to get more into a disco feel. Vocals actually really sit well with the big sound of the mix. Kudos to the one who mixed this song! Was probably interesting to watch.

Shades of Chant – Hands down my favorite track on the album! Aside from being an amazing song – the arrangements are brilliant and the emotion of the song is really captured in a unique way with the pounding drums! While it does drag out and get a little long – the vocals are consistent and the second part is priceless!! I always wanted to sing tanya with a digital kit backing me up! Aderabe is sung more like Ahhhh Derabe!

Shades of Yiddish – It is obvious that Yiddish is his mother tongue when Yossi sings in Yiddish. If I’m not mistaken the lyrics on Gelt were written by Lipa, either way it is a great song, and really shook things up when it was released. (Are the lyrics different? pretty sure) Nice use of the Diet song back from the HASC concert a few years ago..

Shades of Acapella – What more can I say beside A.K.A. Pella has set a standard that is not going to be passed any time soon. Min Hameitzar is a stunning song that really captures the emotion of old. The group really compliments Yossi’s choir well, something I thought would clash because of the full choirs overpowering each other. The interlude is especially gorgeous! If you listen with headphones you can hear how much work goes into mixing this as the background sounds fade from left to right ear…

Shades of March – Not sure this song was necessary, the album is really long! But another song I had no idea that Yossi composed – and I love marches! So bring it on..

Bonus Track – A nice tribute to the much deserved Hatzolah member. The vocals are pretty intense! The sirens fit in very appropriately to the music. This is a great choice for a bonus track – fits into the fun theme of the album.

Now for a BONUS! The first person to tell me where else in Jewish Music did Yossi Green use the word HIPSH – will get a copy of the album from me!
Good Luck!