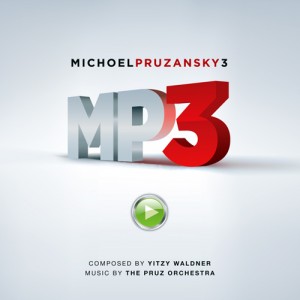 My thoughts on MP3, the third album from singer Michoel Pruzansky:
Letav Uvid – I must admit, Pruz is the only singer who can sing the same words over and over and I don’t get tired of it. He doesn’t kvetch like Shwekey. He doesn’t whine like Fried. And he doesn’t croak like those who shall not be named :). This song has a rock genre with a prize twist feel to it. It’s a great opener and only the beginning of an album that doesn’t fail to please.
Al Shlosha – I love it when the second song on an album stays with a fast song rather than switching off between fast, slow, etc. This is another great fast song that could’ve been used as an opener as well.
Pia Puscha – Yitzy Waldner, the composer of this song has a proven track record of great ballads. Once again, he composed and did guest vocals on another soon to be hit. This song appears to be a cross between “Hashamayim” from Shloime Gertner’s latest album and “Aishes Chayil” from Yaakov Shwekey. A mixture of those 2 songs created quite the beautiful track here.
Al Yisroel Shalom – You have to appreciate the fact that Pruzansky doesn’t go all over the place regarding genres with his song selection. He knows what style of song he can sing well and he sticks with it, nailing it on the head. There’s a lot of similarity between this song and track 02; while some people may not like that, I love that he provided us with yet another song to sing by second dance at weddings.
Shomer Yisroel – Avrumie Schwebel, one of the four vocalists on Shalsheles Jr. 2, and brother of Eli Schwebel from Lev Tahor makes a guest appearance in this song. The maturity in his voice is quite the addition to this song; we seem to never run out of solid child vocalists. This song is very similar to “Ashira” from Pruz’s last album and is stretched a bit too long just like “Ashira” was. 6:51 is just too long for a track.
Sheyovo – The opening instrumental part of this song sound an awful lot like “Vzakeinu” from Yeedle and MBD. Sheyovo has a “geshmack” type of feeling and is another hit for weddings. The best part about this song is the length, it’s short and sweet.
Show me the way – What happens when you mix “The Letter” from Gabay, “You’re Watching Me” from Pruzansky’s last album, and “Shema Yisrael” from Shwekey? You get “Show me the way”. Another great story based English song from Pruz.
Zeh Lazeh – Great choice! This song originally appeared on Shloime Kaufman’s debut album, Avodas Tzedaka. It was by far the best fast song on the album and Pruz decided to redo the song and not just transfer the old music from the previous version. Kaufman makes a guest vocalist appearance in this song and they make such a great team. I sure hope that every orchestra takes note to this song and adds it to their hora repertoire.
Mi Bon – Newcomer composer, Eli Schwab, looks like he’ll have a bright future in Jewish music if he continues to compose beautiful niggunim like this one. This song is a real “tearjerker” and is up there with the best of the chuppah styled songs. Dare I say it’s as good as Shwekey’s “Mi Adir”? This is hand down the best track on the album and from an unexpected source, none the less.
Torah – We’ve reached the final track on this amazing album, and we have yet another great hora track. Although the tempo is slower, if you listen closely, you can hear the resemblance between this track and Misod from Benny Friedman. What a killer album!
Remember, G-d created us all differently, and just because I may rave about an album or dislike an album, doesn’t mean you will too! That’s the beauty of opinion and the difference between people. Make sure to listen to the sampler on Mostlymusic.com to acquire your own opinion.