He was called the Jewish Caruso. Indeed, fervent enthusiasts sometimes referred to Caruso as the Italian Yossele Rosenblatt.

Mr. Rosenblatt, who died in 1933, was regarded as the greatest cantor of his time. But his was a time when music was recorded on heavy shellac or celluloid 78 r.p.m. records. The quality of those recordings was never that faithful in the first place and wore away over the years.

Enter Mendel Werdyger, a lush-bearded 52-year-old Hasidic Jew who runs a record shop on 13th Avenue in Borough Park, Brooklyn. With no college degree and no professional training in sound engineering, Mr. Werdyger has used advanced audio restoration programs on the ordinary computer in his ragtag office to patiently clean away the crackles, hisses and other distortions on those creaky old 78s.

The result: three compact discs with Mr. Rosenblatt singing 35 tracks, including prayers and even a folk chestnut, “Mein Yiddishe Mama.” The first CD has sold 15,000 copies; the third was released a few weeks ago.

“It never sounded so clear,” said Bernard Beer, director of the Philip and Sarah Belz School of Jewish Music at Yeshiva University. “I was brought up with this music and I know those recordings from childhood, and I listened to it and I told my associate there’s no comparison to anything that was done before.” 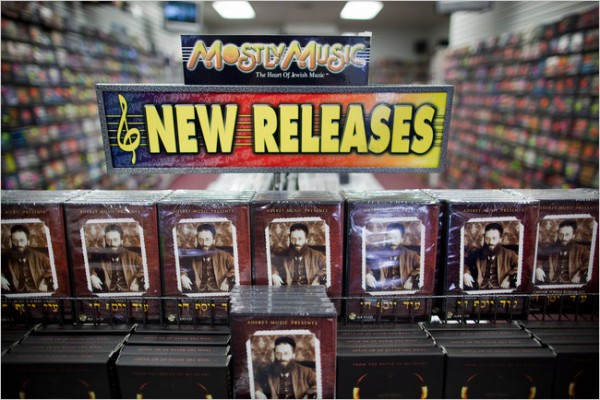 The achievement would have been striking had it been that of a sound engineer. But what sound engineer would spend 5 to 10 hours per song to produce CDs for the rarefied world of cantorial buffs? It was, for Mr. Werdyger, a work of love and zeal.

A tall, broad-shouldered father of 6 and grandfather of 10 who, like many Hasidim, wears a double-breasted frock coat known as a rekel, Mr. Werdyger has cantorial DNA. His 90-year-old father, David Werdyger, is a cantor who succeeded another superstar, Moishe Oysher, in East Flatbush, Brooklyn. His brother Mordechai Ben David, 59, is a popular singer of what Mr. Werdyger laughingly calls “Hasidic rock.” With a sonorous voice of his own, Mr. Werdyger leads prayers at his shtibl, or room-size synagogue, in Borough Park.

Growing up in Crown Heights and Borough Park, Mr. Werdyger had a yeshiva education, going all the way through kolel — a Talmudic institute for adults. At 21, he went into his father’s business, Aderet Music, a wholesaler of Jewish recordings.

About 20 years ago, he found himself at the old 47th Street Photo store buying his first computer — with a now-ancient 20-megabyte hard drive — but was captivated by the other equipment around him, including a machine the salesman had to explain was a fax.

“He told me you put it in one end and it comes out the other,” Mr. Werdyger recalled. “I was totally awe-struck and I got hooked on technology.”

About five years ago, he started dabbling in audio restoration, cleaning up recordings of his father’s music. Rosenblatt became his Everest.

Mr. Rosenblatt was born in Russia in 1882 and toured Eastern Europe as a child prodigy. In 1912 he immigrated to the United States and became the cantor at Ohab Zedek, an Orthodox synagogue then on 116th Street in Harlem. Blessed with a penetrating bell-like tenor with a range of two and a half octaves, and a gift for coloratura and falsetto, Mr. Rosenblatt had the ability to squeeze the pathos or elation out of every prayer.

“The key to Yossele Rosenblatt’s kingship is he knew how to light a fire under the soul,” Mr. Werdyger said.

Mr. Rosenblatt earned large concert fees, and his fame extended beyond the Jewish world, leading to meetings with Charlie Chaplin and a singing role in the 1927 talkie “The Jazz Singer,” in which a renegade Al Jolson delights his ailing father by taking his place at Kol Nidre, the solemn Yom Kippur prayer that is the high point of the cantor’s year.

Mr. Werdyger listened to CD reissues of Mr. Rosenblatt, but “they were duplicates of the 78s and the sound was not what I wanted — with every generation it deteriorates greatly,” he said.

So he searched out collectors willing to lend him their 78s, people like Charlie Bernhaut, the host of a Jewish radio and Internet program, and institutions like Florida Atlantic University, which has one of the largest libraries of Jewish music. He found mentors like Alan Silverman, an engineer who advised him on making transfers from 78s, and Adam Constantino, who taught him to put recordings into a 24-bit digital format.

Mr. Werdyger transformed Mr. Rosenblatt’s voice into electronic bits — sometimes taking the same recording off as many as seven 78s to get the clearest passages, then splicing them together.

Working with a half-dozen restoration programs like iZotope Rx, he broke each song into frequencies that appeared as waves on a computer screen. Such programs make the crackles and hisses implanted by the original recording equipment or by the ravages of old phonographs visible as anomalous patterns. With a few clicks of the mouse, Mr. Werdyger could strip those away, and the restoration program filled in the voids, much as a Photoshop program patches in the missing color.

“It sounds better than when it was recorded in the room,” Mr. Werdyger said. “I don’t think Rosenblatt would have recognized how well we preserved and enhanced the original recording.”

The title of the Rosenblatt series is Od Yosef Chai, which means “Joseph is yet alive” and echoes the patriarch Jacob’s words in Genesis about his son. The double entendre suggests that Mr. Rosenblatt, whose formal first name was Joseph, has been brought back to life.

Cantorial music is growing more popular among Hasidim, whose prayer services typically emphasize ardor rather than vocal flourish. Many Hasidim, like Mr. Werdyger’s friend Menashe Silber, sometimes sneak away from their own synagogues to hear Benzion Miller, the cantor at a non-Hasidic synagogue, Young Israel-Beth El of Borough Park.

So Mr. Silber said of Mr. Werdyger, “By doing this work, he’s bringing back cantorial music to his generation.”

And to earlier generations as well. The other day, Yosef Klein came in to Mr. Werdyger’s shop, Mostly Music, to buy the latest Rosenblatt CD. He is 81 and remembers when his grandfather took him to hear the great Rosenblatt sing. Now he would hear Cantor Rosenblatt again, the voice as true as when he was a little boy.

(COPIED FROM THE NY TIMES)