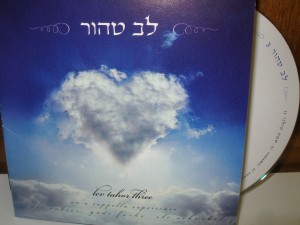 This third Lev Tahor album, released in 2004, is another Lev Tahor a cappella album and of the four Lev Tahor albums it is definitely my favorite.  There are no original songs on this album, but it features some excellent songs, some of which are not at all recent, but still top notch songs, proving that newer is not necessarily better.  Like all the other Lev Tahor albums, this album was produced by Lev Tahor themselves and this one features some guest vocals further enhancing the songs.  Clocking in at only forty five minutes, this album is a little on the short side but as usual, Lev Tahor shines in both their vocals and their well done harmonies.  If you don’t own this album, I suggest you rectify that mistake right now.

Shma Koleinu: Is there another group out there that has such consistently fabulous introductions?  Lev Tahor is perfectly suited to this beautiful slow song from Dveykus 4 and they more than do it justice.  The harmonies on this opening track are so beautiful that you don’t miss the instruments at all.

Deaf Man In The Shteeble: The booklet credits this song to Country Yossi, but the Country Yossi song is actually a remake of a 1970’s song called “Blind Man In The Bleachers”.   While the Country Yossi version is about a deaf man who can’t hear his son daven, the original song is about a blind man who wants to see his son play football.  Either way, this version captures the poignancy of both songs, with sweet vocals and dead on harmonies.

Baruch Hagever:  I am guessing that most of you reading this weren’t listening to Jewish music in the late 1970’s.  Things were very different back then.  You were grateful to have any Jewish music to listen to but there was very little innovation in those days.  This song, from Amudai Shaish’s double album, was groundbreaking in that it was a completely different style than anything that was out there and everyone went absolutely wild for it.  Thirty years later, this song is still being sung and my kids all learned it in sleepaway camp.   Lev Tahor does a great job with this fun song, though I don’t know why they pronounce the phrase “v’haya Hashem mivtacho” differently than in the original.  Awesome song, very, very well done.   Love the key change at 2:36.

Yedid Nefesh: There aren’t enough words to describe just how stunning this song from Aish’s first album is.  This song has been sung by members of my family under the chupah and when we sing this one by Shalosh Seudos with three or four part harmony not only is it the highlight of my Shabbos, but neighbors have stopped in to find out where the beautiful singing was coming from.    Lev Tahor does a great job with this song, although it is so gorgeous that it needed nothing more than simple harmonies and I don’t know that all the shtick that they threw in here was really necessary.  Either way, it is very, very enjoyable.

In A Vinkele:  Why is the introduction to this song start taken from Oyfn Pripetchik, a very old Yiddish song about a Rebbe teaching his students Alef Bais?  Not that it isn’t a pretty piece of music, but from a lyrical standpoint, there is absolutely no connection to this song.  While In A Vinkele was also redone by Yaakov Shwekey on L’shem Shomayim, this version, featuring vocals by Rivie Schwebel, father of Lev Tahor’s Eli Schwebel, really captures the essence of the song.  Once again, the dramatic voice over just doesn’t seem to add anything.  With a song like this, fabulous vocals and drop dead gorgeous harmonies, why have anyone talking?

Daaga Minayin:  A great way to prove that while a three man group who can nail their harmonies is great at slow songs, they do just as well with the faster stuff.  Lev Tahor sings backup for Yossi Green on this hora from MBD’s The Double Album and it is pure, unadulterated fun.

Shomer Yisroel:  I am betting that most of you have never heard this magnificent song before.  I fell in love with this song several years ago when my girls brought it home from camp one summer, where it was featured as a color war theme song.  Originally featured on Kumzitz Classics by Suki and Ding, this 1992 Chumi Berry composition titled “Yisrael” was sung by Dov Levine and had English lyrics, but I for one had difficulty relating to the concept of Dov Levine singing the words, “I recall as a young bride”.  Switching to these lyrics was definitely a good idea!  Lev Tahor does this song to perfection.  Buy this album for this song alone.

Lo Alecha:  I am estimating this song by Jeff Klepper to be from the early 80’s though I may be off by a few years.  (Feel free to correct me if I’m wrong.)  It was, at the time, innovative in that it wasn’t typical Jewish music.  While it was featured on Suki and Ding’s Encore! 1 album in 1994, this was the first time I have ever heard this song professionally recorded and all these years later, it was a real thrill to hear it again.  An excellent choice for Lev Tahor.

Yehi Shalom:  I confess, I am not a Carlebach fan.  Go ahead and shoot me.  I know that makes me a musical heathen, but that is just how I feel.  Having said that, I thought this was an extremely well done version of this very popular Carlebach song.