Review of Aryeh Kunstler’s “Our Eyes Are On You” 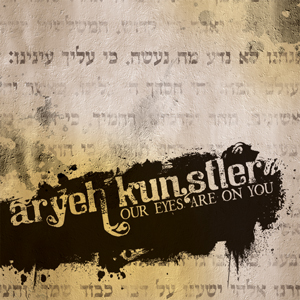 For those of you who are new to the Alternative Jewish Music scene, Aryeh Kunstler is the king, in my opinion. Aryeh blends the styles of contemporary secular music and English lyrics with gorgeous pieces of Jewish music and Hebrew lyrics.

This is Kunstler’s second solo album, although it has the quality of a 4th or a 5th album. It’s no surprise, Kunstler comes from a musically gifted family. His father, Avi Kunstler, has albums available for purchase as well, and his brother Dani has the group V’havienu which Aryeh is a part of. Also, Aryeh can be found on the wedding circuit as a guitarist for the Neshoma orchestra and as a member of Yaakov Chesed, a 4 piece band headed by Jake Polansky.

Like I previously mentioned, expect great things from this album, it went above and beyond my expectations and a whole other world past “From the Depths”, his debut album.

I decided to do something different, I compared and contrasted this album with Aryeh’s other musical works. Enjoy!

Hashem Sifoseivs Oseh Shalom –
A mix of Hebrew and English lyrics, this song is not only a great intro song to get the blood pumping, but it has quality lyrics as well as some very cool Kunstler tweaks. The second time around, listen for how Kunstler sings the words “I long to say”, it’s moments like those that the Kunstler style and skill can be found and eaten up. He also throws in something I never get tired of hearing, a muffled/synthesized voice with light guitar strumming behind him, in the last minute of the song. Oseh Shalom was good, but it was not nearly as professional as this song is.

B’Shem Hashem vs Az Yashir –
This is a tough call for me, because Az Yashir was my favorite song on his first album. However, once again, the professionalism in the music and vocals can be found in this song more so. Not only that, but this song has more of a soft rock feel to it, and glorifies the soft rock genre. Aryeh adds so much feeling to this song by the mixture of “Yah’s” with the Hebrew lyrics. Toward the end of the song, there are some gorgeous background vocals as well, that should not be taken for granted.

Mi Chamocha vs The Radio? –
I discussed this song with my wife during one car ride. We both grew up listening to secular music, and we came to the conclusion that if one song were to be taken from this album to be played by the radio stations, this would be the right choice. It has a nice refrain, where it slowly builds you up to the climactic chorus which makes you feel as if you’re flying. All around, this song just screams good times. It’s not my favorite song, but it definitely one of the better songs on this album.

Nachamu vs B’lev Echad Single –
This song is very heartfelt, and could definitely touch anyone who has witnessed a tragedy or just feels the daily stress of this golus. This song does exactly what it preaches, it consoles you and gives you that extra lift. I was jogging back from the car repair shop, after having a sleepless night the night before due to my car breaking down in the middle of nowhere while coming back home from a wedding and this song, once it got to the second time through, turned my jog into a run where I felt the stress and over tiredness fading from me and a second (or perhaps third) wind kicked in. This song really gave me a boost and I think it could do the same for anyone. It has the same feel as B’lev Echad, the single that was done for the Merkaz Harav attacks. Very emotional, very good.

Modim vs Modeh Ani –
Both Modim and Modeh Ani (first album) are about thanking our creator. This song was done way better though. Modeh Ani was less professional and the overall tune was not as good as this one. Everytime I hear this song, it makes me want to play the air drums… in other words I start mimicking the drums in the song by slamming on anything with my hands… that reminds me, I have to go buy a new vase…woops.

Veliyerushalayim vs V’havienu albums
We have more of a V’havienu feel to this song than anything else. Most people know that V’havienu (Dani & Aryeh Kunstler) are my favorite albums, so how could I not love this song? It’s so soothing and has so much hartz in the song. The best part is, the vocals are just icing on the cake, it’s the musical arrangements in this song that are a thing of beauty. I would love to hear an instrumental version of this song.

Gamvs rock songs in general
Gam is a crazy awesome rock song. It has the same style as Mi Chamocha, where it has a slower refrain and a rocking chorus that literally rocks (no pun intended). There’s not a lot to write about it, but just know that this song is so good, it speaks for itself.

Lishuasichavs Shimshon?
This is such an interesting song, I don’t really know what to think. It’s a fast rock styled song with a dark feel to it. It’s about the story of Shimshon (Samson) being captured by the Plishtim and he’s bound to the two pillars with his eyes gouged out. I guess it’s uplifting that Shimshon got one more burst of strength to destroy the plishtim, but at the same time, it feels kind of strange listening to these lyrics with this music behind it. It’s by no means a bad song, it has great arrangements, I’m just confused.

VaAnachnu Lo Naida vs Im Eshkacheich
You’ve found it! This is my favorite song, and I’m surprised he didn’t call this song “Our eyes are on you”, for this is the song you’ll find those lyrics in, if you were looking for them like I was. From start to finish, this song feels like Im Eshkacheich from the first album mixed with some V’havienu song , but like 20x better. LISTEN TO THIS SONG, you will not regret it.

Split the Seavs my head
What is this? It’s not my style, but there was definitely a lot of work put into this song, so there’s no way I can bash this. I’m sure there will be lots of people who love this song, but it’s not my genre.

Yizkerem vs depression
I feel like this song could have been composed on tisha b’av after watching one of those Chofetz Chaim Heritage Foundation videos. The song never really uplifts you, it starts with a depressing refrain and an leads into an eerie chorus. From the lyrics, it’s clear that the song is about the holocaust and how we should never forget it even as we come closer to the time when the last survivor will pass on to the next world. It’s an appropriate way to end an album since we are in golus and we really shouldn’t feel true joy until the final redemption.

Overall, I loved this album. The last 2 songs weren’t my favorite, but there was definitely a lot of work put into them. This was definitely worth the delays and the wait, Aryeh Kunstler went up a whole level in professionalism in my head, and he will in yours too. BUY IT!