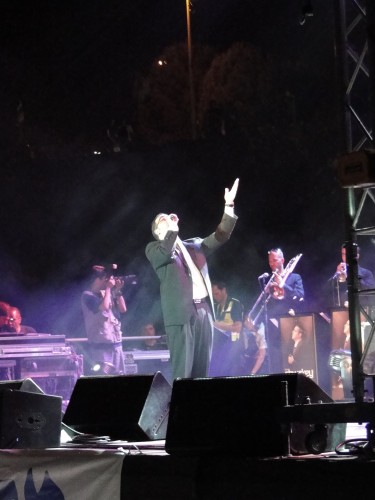 It was a major event for Gush Etzion when Yaakov Shwekey arrived on June 2nd for a one-night-only concert in the huge new outdoor amphitheater in Efrat. Set right into the slopes of the Judean hills, on the outskirts of the Rimon neighborhood, once there one could watch the arriving people streaming down the winding path in ever increasing numbers as it got closer to show time. I arrived early with Lexi, her friend Kareen, Eitan and Maya and we patiently waited for the main event.

The last big concert I was at was the legendary Paul McCartney concert in Tel Aviv.  In a city of 400,000, there were more than 40,000 fans, crowded in the outdoor Park Hayarkon. Of course you can’t compare McCartney to Shwekey; the crowd that packed this amphitheater was estimated at 4000 people – one tenth of the McCartney crowd. Actually, since the Gush has a population of only about 30,000, relatively speaking I suppose Shwekey did even better than Paul…

The concert opened with a recorded song, “V’shavu Banim l’gvulam” (And your sons shall return to their borders) accompanied by a moving multimedia p

resentation, on massive screens, of our soldiers that are missing in action. A special focus was placed on Gilad Shalit who has been in captivity for nearly four years. They got us in our guts – we were all theirs.

Aharon Razel then opened the concert with two songs. When he started singing “Higiya zman” (“The time has come”) dozens of exuberant youths decided the time really had come and ran to the front and started dancing. We happened to have gotten excellent seats with a great view; when dozens of kids started dancing in front of us, we had a view of them… But it was all good.

Finally Shwekey got on stage. The crowd went wild! I was sitting there thinking, Now here is a religious singer, wearing a huge, black kippah on his head, singing religious songs about “Toyrah”, playing to this crowd of modern orthodox people. Nobody looked or dressed like him, hundreds and hundreds of youth, some not looking religious at all, are totally getting into the music. Yaakov Shwekey is not like many Jewish singers who try to weave religious content into a pop music sound; he simply delivers authentic, Jewish music. And yet he manages to appeal to all ages, from the most religious to the barely-at-all. Appeal? The people were going nuts over him!

Even the guards, all official in their yellow reflective vests, could be found dancing and singing along like the rest of us. Can’t say I’ve ever seen that before. In fact, about those guards: At one point I was fairly close to the guardrail taking pictures and a guard approached me. I thought he was going to make me move. But instead he offered to go even closer and take pictures for me!

After the intermission Shwekey invited about a dozen uniformed IDF soldiers up to thank them, and through them all of the soldiers, for defending the Jewish nation and Jewish people. He sang the beautiful song “Im Eshkachech” (If I forget thee O Jerusalem). It was gorgeous! Even the soldiers were crying.

Shwekey spoke about Jews all over the world being “Areivim zeh lezeh” (Responsible for one another). That we are all the same, regardless of where –and how – we live. From the concert he gave I’d say he really delivered on that message – through the songs he sang, the media in the presentation, and the crowd that he drew.

Yaakov Shwekey finished with an encore of “V’hi She’amda” dedicated to Shayetet 13, our naval Special Forces unit that was ambushed on the Gaza flotilla this week. The enthusiastic crowd joined in as one, “v’HaKadosh Baruch Hu matzilainu miyadam” – And G-d will save us from their hands. As we watched the ending fireworks explode in the sky, it was truly as if G-d were punctuating the prayers evoked in the songs.

[Republished from “The Aliyah Blog” which you can check out here.]