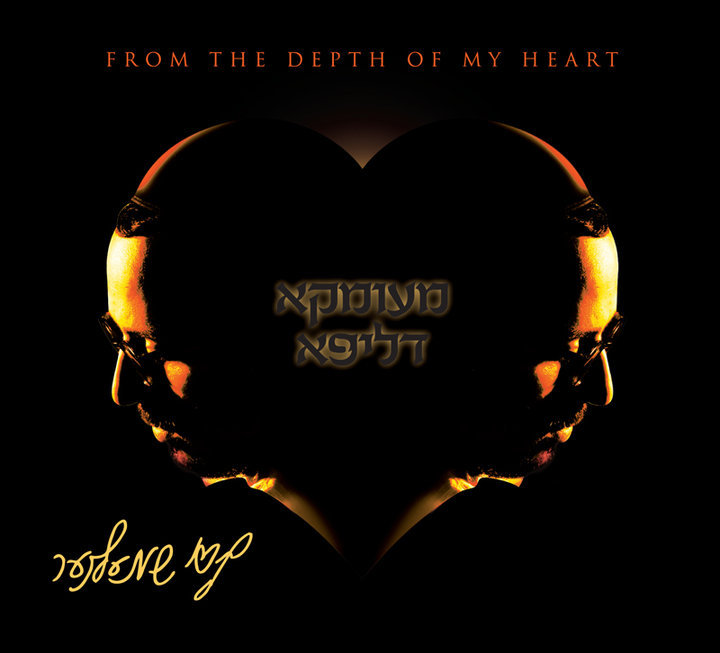 THIS IS THE FIRST OF A SERIES OF REVIEWS ON THIS CD PLANNED BY THE STAFF OF JMR.
WE WILL HAVE ANOTHER ONE COMING SHORTLY.

The hardest working man is Jewish Music has released an epic of an album in “Meimka Dlipa”. Lipa is the most talented artist in modern Jewish Music since Reb Shlomo. He keeps revolutionizing the industry with his ability. He brings us a 16 song effort, and doesn’t settle with a mediocre typical 10-12 song album that other big names have put out recently.

Everything he does is original and progressive. His album insert is the most in depth I have ever seen. I thought Dovid Gabay and then Benny Friedman set the standard with their albums, but Lipa runs circles around them. It’s no secret that Lipa is the biggest thing now. He began as a Yiddish crooner playing for a small niche market, but has now crossed over, and is headlining every big show.
Lipa has endured his trials and tribulation in the last few years where those jealous of his success have tried to bring him down, but he has persevered and become bigger and better because of it.

This effort is a fantastic showcase of his talent, and virtually everyone in Jewish music contributes in some way. I won’t go into full detail about every song. See the booklet for background information.

“Splash” is a great and unique way to start the CD. It one of the many hybrid songs that begin with liturgy and then continue with English and Yiddish. The song is a collaboration with Avraham Fried. It has an original arrangement and is one of the best songs on the album.

“Choson Domeh Lemelech” is a Sephardi style wedding song. I could do without all the new Sephardic songs from people who are not Sephardic (even those who are half Sephardic). To me these songs all sound the same.

“Meimke DLipa” is a solid mellow heartig Yiddish melody about Heart. I think the song is ok, but not great.

“Mi Chochom” is a nice slow song. Just OK. “The Language of Music” is a stellar Pinky Weber compostion about how music connects to people, and ultimately brings them closer to the Aibishter. Great arrangement and excellent concept. “Melech” is an very good ballad from new composer, Yitzy Landau. Lyrics from Shabbos Zemiros. Second best slow song on the album.

“Ich Hub Gehapt” is a collaboration with Yossi Green (the second best composer in modern JM after Reb Shlomo). It’s a fun song, in a Klezmer style about Lipa’s childhood. In the 8th Note Lipa wrote a funny song about Yossi, now Yossi is paying the favor back on this cd.

“Mizmor Lsodah” is the best song on the cd. This track explains itself in the introduction. It’s a guitar heavy sound that moves at a rapid pace. I said “Wow” after I heard this. Yanky Katina shines on guitar here. The solo is excellent. This is Chasidishe Rock N Roll.

“Vanpooh Niheerin” is the second best song on the CeeeeeD(thats how Lipa pronounces CD). Composed by Motty Illowitz of “Yener” and “Bayis Neeman Biyisroel” fame. The lyrics are original from Kigavnuh before Maariv on friday night. It’s a very hartzige melody.

“Vuus Toot Dir Vee” is about a story about a guy who gets mocked by the mispallelim of a shul after he messes up as a Baal Tefilah. This song has a strong message, and an even stronger underlying message to Lipa’s opponents. It’s an excellent song about Lipa being mochel his detractors. I think Lipa is telling his opponents that the last laugh is his.

“Ayeh” brings in MBD for this song. MBD composes and also lends his vocals to track. Its a techno Eli Lishinsky song. It is awesome start to finish.

“Chaim” is a ballad tribute to Chaim Lax OBM written by his son Moshe Lax. The lyrics explain themselves. The song is a fine tribute to the Philanthropist who did very much for the Klal.

“A Gut Vort” is another song about the power of words, how good words can help so much just as negative words can hurt. Like the song earlier, this is a shot at Lipa’s haters. Live and let live. I love how Lipa addresses his detractors, and doesn’t shy away from controversy.

“Hora Yes Loshon Hora No” continues along the same theme.

“Achron Achron Choviv” is an excellent song closing out the CeeeeD. Its about Moshiach coming in our generation.

There are much more in depth explanations of all the songs in the cd booklet. I didnt want to sound redundant. This review is strictly my opinion. This CeeeeD is brilliant. Download it like I did on Mostlymusic.com only $.75 a song. The best deal for new Jewish music ever.