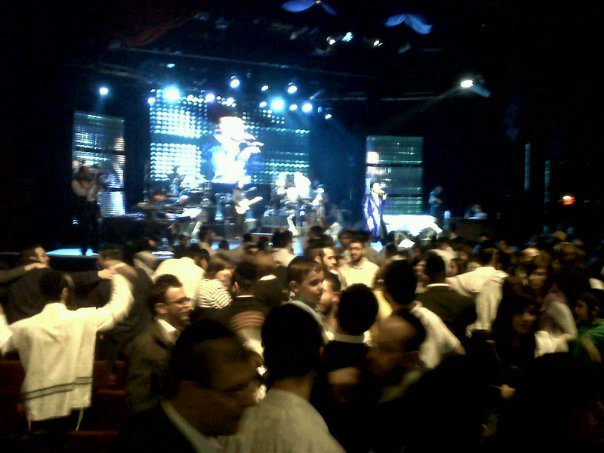 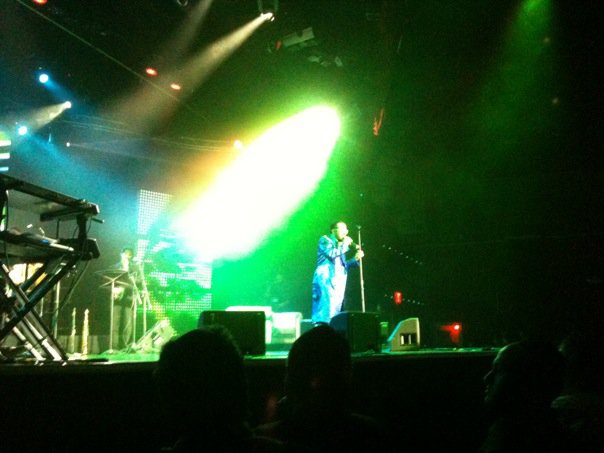 What an amazing night! Lipa promised a night of firsts and you better believe he delivered!  In your entire life, have you ever been to a concert where there was a desk and couch on the stage?  Country Yossi hosted the breakthrough format from behind a wooden desk,with Lipa sitting in one of two silver, comfy looking couches. Throughout the night Lipa sang songs from his brand new CD and in between songs talked with guests about the creation of the CD.

The show began with Lipa sitting by a typewriter. The music started up really strong,  with a disco party intro featuring Yanky Katina on guitar, Shai Bachar on keyboards, Nir Graff on Bass, Eran Asias on Drums, Samuel Torres on Percussion and Shloime Cohen on Sax.  The show was produced by Chesky Zeiger and Yanky Katina with sound by Ilya Lishinsky. Background vocals were provided by Shauly Grossman, Yitzchok Landau and Lipa’s Nephew, Yanky Schmeltzer.

The show began with Lipa appearing on stage singing, Splash, the opening track from the new CD.  This concept for this song was a joint collaboration between Avraham Fried and Lipa. The song really rocked and people reacted immediately to the catchy lyrics.  Country Yossi came on stage and sat down at the desk, where he and Lipa discussed the significance of the number 16 for this album, which has 16 tracks.  The CD is being released on May 16th.  Lipa only sleeps 6 hours a day leaving him 16 hours to give out his heart. The address of Lipa’s new shul is number 16, and so on…A video of Lipa and Avraham Fried talking about, Splash, was next on the program.  This was an extended version of the Splash video that is currently on YouTube, that had lots of fun information added into it. Lipa and Fried really looked like they had a fun time together. Here’s to hoping we see more from the two of them!

Lipa explained the next song, Chosson Domeh, saying that at every wedding he see the Chosson asking for so many things, and he reminds himself that a Chosson is takkeh like a Melech, as it says, Chosson Domeh Lemelech. Lipa thought this would be a great wedding song and I’m sure we will be hearing  lots and lots of it very soon!

Yisroel Lamm was the next person called to the couch by Country Yossi and they spoke about many things including how Yisroel Lamm got started. (On a dare, by then Neginah manager Issac Gross). Lipa  sang  a song which he sang as a child on Zishe Schmeltzer’s CD, which was arranged by Yisroel Lamm. Yisroel remembered the song but admitted he didn’t recall the then young Lipa.

The next song Lipa sang was the title track, which Lamm arranged, and he actually conducted the song live.   This was followed by a video of  Beri Weber talking about Mi Chochem, a country style, Kumzits song that he composed five years ago.  Lipa loved the song so much he just had to have on his album. The crowd  waved their hands in the air and hummed along as Lipa sang this song.

Another video, this time Lipa on the phone, in his car, talking to Pinky Weber about the next song,  “the Language of Music”, which Pinky composed.

Country Yossi called Yitzchok Landau up to the couch, and they discussed “Melech Malchei Rachamim”, the  beautiful, slow song he composed. Lipa first met Yitzchok visiting a relative of Yitzchok’s in the hospital and Yitzchok asked Lipa if he  could play him some original songs.   Lipa agreed and a friendship was created.

The next song was an amazing rock song titled “Mizmor Lesoda” which had the entire crowd on its feet screaming and singing along. This is sure to be a concert favorite for many years to come!

Michoel Schnitzler had his turn on the couch and they chatted  about when Michoel and Lipa first met and Lipa’s experiences working with Michoel and his nephew, Naftali Schnitzler. Michoel really made the crowd laugh, and we learned a lot at the same time.

Next they interviewed Shauly Grossman about the song “A Gut Vort”.   Shauly talked about his relationship with Lipa and how they bounced countless song ideas back and forth.   Of all those songs, “A Gut Vort” felt like the strongest song and they decided to put it on the CD.

Then Lipa sang the phenomenal Hora, Yes. Loshan Hora – No!, which was cute and  creative with lots of fun lyrical shtick. Lipa was dancing like crazy on the stage.

They then showed an extended video of Motti Ilowitz talking about his song and his relationship with Lipa. Lipa showed us some more video of the string session being recorded for the next song. Lipa dedicated the beautiful song  to Yossi Tyberg’s son, Boruch Mordechai ben Tessel, may he have a complete and speedy Refuah Sheleimah!

As good as the concert was, they saved the best material for the end. First we were treated to a wonderfully interesting interview with the one and only Yossi Green, who composed a song called Ich Hob Gechapt.  This was followed by a video of MBD discussing his song, Ayeh. MBD talked about how well Lipa sang the song and how excited he was to have Lipa was singing this track. Lipa  sang the song, which was another amazing rock song that is sure to be another concert staple.

Lipa  closed out the show with Achron Achron Chaviv, a song he sang for the first time at the Great Parade in Crown Heights and was featured even earlier on JMR as a sneak peek.

All in all a truly amazing show.  It was fun, interesting, exciting and as promised, a night of firsts, full of wonderful and groundbreaking new Jewish music.

You can now buy Lipa’s CD in most NY area stores before Shabbos, and around the country by Sunday and Monday. You can also download the CD at MostlyMusic.com, which includes the full 40 page booklet in PDF form.