We’d like to remind everyone that the voting does not end until Wednesday. Please also note that we aware that there is vote tampering going on and votes will be deducted in the final tally. When the contest is over we will be sending the data to a professional who will analyze the logs and determine how certain categories were getting 100’s of votes in a matter of hours. If there was an email/get out the vote campaign that took place right after Shabbos we suggest emailing us the link to verify this. (Awards@jewishmusicreport.com)

More than a few people noticed that about 100 + votes went to a variety of artists, including one who received 100 + votes almost across the board. When Shabbos was over the most voted in category had 600 votes, within a few hours there was a mysterious additional 100 + votes scattered in certain categories. Since last night there were only 15 new votes. It’s plainly obvious that someone did figure out a way around the IP/cookie block wordpress installs.

One additional thing, when people leave multiple comments under different “names”,  IP’s and fake email addresses it raises serious suspicion. We’ve noted this in the past and we would like to remind you again, everything is tracked and you may not be as hidden as you think you are. If we are all honest there should be no need for fake user names and email addresses.

While we are aware that no system is perfect, we would hope that some people would respect the vote and not try to interfere. Please do not vote based on the current numbers as the final result will be announced once the stats are analyzed.

Thank you and we hope you are also enjoying the blogger picks that we have been posting. More are on the way!

We’ve been going through the logs and we found the issue. It seems there is some funny business going on. We’ve adjusted some of the numbers, we are still going through them. This is a very meticulous process, and we understand the sensitive nature of this. We just want you to see a screen shot of a sample of what we’re seeing. 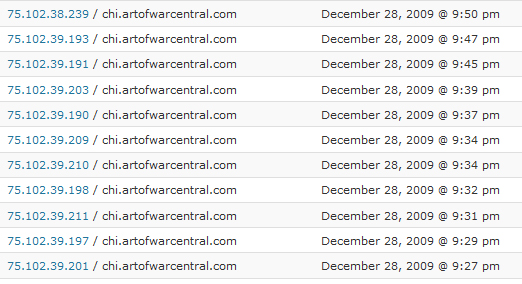 While I’m sure you will notice numbers going down in certain areas, please understand we are not accusing anyone. We are choosing to believe this was done by a misguided fan. We appreciate the aggressive support of your favorite but please stop as we can track you and you are ruining a process that was really meant to be fun for everyone.