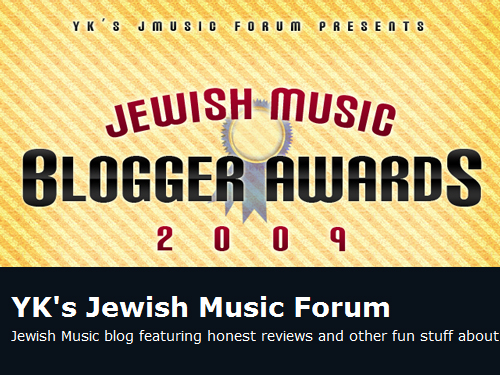 Now my picks. 2008 was the year of Yossi Green’s 8th Note and last year’s awards reflected that quite well. I believe 2009 is the year of Benny Friedman, and my personal picks reflect that as well. Taamu is my choice for Best Debut and Best Album; No Lyrics is my pick for Best Arrangement (credit to Ian Freitor, one of the best arrangers out there today) and Emes for Best Yiddish Song. This is perhaps the best debut singer I’ve seen in many years, surpassing the recent debuts of Shloimy Gertner, Gabay, Yosef Chaim and others. I don’t mean to belittle these debuts, they actually brought us great singers and good music, but Benny Friedman is what I call a “star package”. He has a distinctive, cheery voice, he has charisma, he is not afraid to innovate and he has a great production and marketing team supporting him. This combination is rare in JM today and for this reason Taamu will get most of my nominations.

However, it will not get the Best Song of 2009 Award from me. I really like all the songs from Taamu but Shwekey’s V’hi Sheamda has something more to it and it is my Best Song of 2009nomination. This song has a lot in common with 2008’s Best Song – Anovim, which was also released in a concert. Even though Anovim was not really a new song, it was awarded the nomination of Best Song, and although I prefer the live version of V’hi Sheamda rather than Shwekey’s version, I think we should be consistent and give this song the credit it deserves. And most of the credit should go to Razel, who composed and arranged this song, and who was clever enough to let Shwekey make this song popular in Cesarea.

I will copy LifeofRubin and I will make an “honorable mention” to another song – Batuach Ani from Taamu. This is actually Benny Friedman’s favorite song of his album, and I couldn’t agree more. This is a very complex song and it’s really hard to sing it (don’t expect to hear it in weddings and kumzitzs) and if we would have the Most Innovative Song of 2009 award, this song would surely win.

I will not choose any song for Best English Song, since I didn’t hear anything worthy of it, and I will not choose the Best Boys Choir album, since my ears retired from listening this kind of albums a long time ago. I only saw one concert DVD this year so I can’t say if it’s better or worse than the rest.