I should have my head examined. I just drove 94 miles round trip, in a blizzard, to go the MBD Kulam Ahuvim Live concert. The trip home that would take an hour under normal circumstances took almost two and a half hours and in some spots the roads were as bad as I have ever seen them. It took me five full minutes just to pull my car out of my parking spot after the concert and I didn’t get home until 2:15 AM.

It was worth it.

What an unbelievable night it was. I actually walked in at 8:50, twenty minutes late just as the lights went out and the eight piece Freilach Orchestra, dressed in black caps, vests and woolen tzitzis over their shirts, struck their opening notes. My first thought as I walked in was that twenty minutes late was pretty prompt given that there was a blizzard raging outside. My second thought was that for the first time that I could remember, the band wasn’t too loud.

The opening act was Avrumi Flam, who to be honest, I had never heard before. Obviously, my loss. His first song was the timeless Tov L’Hodos, the title track from his Tov album, released in 2000. A beautiful song, flawlessly done, in short, the perfect opening number. His next song, B’Shetzef, from his 1995 album of the same name, was dedicated to the 6,000,000 who died in Europe. I will tell you that I am not a big fan of World War II songs, but Flam is clearly a talented performer and was very enjoyable.

Next up, Shua Kessin, whose voice filled the room with the opening notes of Lo Lihityaesh, his signature song, before he even appeared on stage. I was obviously sitting right smack in the middle of Kessin’s fan club, as they erupted with wild cheers and applause when Kessin finally came out. While some performers don’t sound the same live as they do on their albums, Kessin was as good or better live as he was on his CD. He followed up with two more songs from his album: the hartzig Nishmas and a Yiddish rock song, Beiten, accompanied by some very fancy footwork. Of course, Kessin walked off with his trademark phrase “bye, bye, bye!”.

Yeedle, who was introduced as “the prince of Jewish music” took the stage, singing a number of songs from his Lev Echad album, including Ahallel Amallel, Elon, Ashrecha, Yismach Yisroel and V’Hevei before finally being joined onstage by Aaron Razel. There was lots of jumping and dancing as they sang Lev Echad together and it was obvious that the audience enjoyed every minute of the duet.

Aaron Razel, who flew in Friday morning from Eretz Yisroel and left to the airport after finishing his set, took a moment to thank both Ozer Babad and the Werdyger family for giving him the opportunity to perform at his first New York concert. His first song was Zman Hageulah from his 2002 Redemption Time album. I am honestly not sure how much of the audience actually knew the song, but everyone clapped along and seemed to enjoy Razel as he sang and played guitar. I doubt there was anyone in the room who didn’t know Razel’s second song: his brother Yonatan’s uber-hit, Vehi Sheamda. Lots of singing from the audience on this one. Again, I don’t know how familiar anyone was with Razel’s other songs: Hasneh, from his 1997 The Burning Bush album and Shir HaMaalos (sorry, can’t remember what album that one is from, but I’m sure one of my loyal readers will help me out here), but everyone seemed to genuinely enjoy Razel’s performance.

No matter how much people were enjoying the performers, by now it was getting pretty hard to ignore the chants of “MBD!! MBD!!” that were growing louder and louder. With a big smile, Razel spoke about how he never dreamed that one day he would have the opportunity to sing onstage with Mordechai Ben David and finally, the man everyone had been waiting for came out on stage.

There are no words to describe the euphoria that erupted as MBD emerged onstage, bekeshe, shtreimel and all, singing Es Achai with Razel. It was quite a contrast: the frenzied cheering coming from the audience, and the beautiful, haunting duet being sung on stage. There was something magical between the two performers and while this song was not one of my favorites on Kulam Ahuvim, it was truly beautiful last night.

In a flash, the energy level in the room skyrocketed as the music shifted from the melodic notes of Es Echai to the introduction to B’Inyan HaSimcha, and without exaggeration, the audience went absolutely wild. MBD took off his shtreimel and laid it down next to the drums, only to be snatched up seconds later by Razel, who promptly put it on. The two danced around the stage together and I can only tell you that as good as B’Inyan HaSimcha is on the album, it was even better live.

While MBD was just getting started with his performance, Razel had a plane to catch, so he thanked Yeedle for making the shidduch between him and his illustrious father, and both he and MBD left the stage. Next it was time for the first of two videos from Pomegranate, a sponsor of the evening. This video showed the Pester Rebbe, making his first shopping trip to Pomegranate via horse and buggy and steam locomotive, before finally reaching the store where he photographed everything in sight.

And finally, the main course, the segment of the evening everyone had been waiting for. Not that the other performers weren’t terrific, but it was clear that by now everyone was waiting for Mordechai Ben David to take the mike and not give it up for a very long time. So that I don’t have to repeat myself by every song that MBD sang, let me just say this up front: with every song, the applause was thunderous, the crowd went wild and there were bochurim dancing in the aisles. (Two notables spied in the throng of dancing boys were former Miami Boys Choir star soloists Yosef Schick and Ari Rosner.)

MBD led off with Kulam Ahuvim, which was just amazing. One of the things that makes Mordechai Ben David the undisputed king of Jewish music is the fact that he has managed to keep up with the trends and keep himself as fresh as ever. So while his classics are exactly that and are songs that everyone wants to emulate, he is staying current and this song proves that while MBD may be a Zaidy, he is clearly still a contender and not going to just bask in all of his previous successes. He came across as vibrant, energetic, and clearly still king of the hill. Let this be a lesson to the many new singers who emerge on the Jewish music scene day after day: success is built slowly, one hit song after another. It doesn’t happen overnight and it is clearly a goal to be aspired to after many years of hard work, not something that happens overnight.

Okay, enough preaching, you want to hear about the concert, right?

MBD did an awesome job on Kulam Ahuvim and I don’t think anyone can say enough about the Freilach band who was consistently at the top of their game the entire night, which is saying a lot given that we are talking about a concert that lasted two hours and forty five minutes with no intermission.  From Mendy Hershkowitz on keyboard  to Nachman Dreyer on guitar, each and every musician did a truly outstanding job. Kulam Ahuvim was another song that was even better live than it was on the album and considering how fabulous it was on the album, that is saying an awful lot.

The next song was Anovim, the Yossi Green classic that just about everyone who is anyone has sung at some point in time. We have all heard so many beautiful renditions of Anovim, yet it was such a thrill to hear it sung by MBD, the person it was actually composed for. Lots of cell phones waving in the air on this one, lots of people singing along with MBD. In fact, when Mordechai Ben David finished the song, the audience kept on going.

The hits just kept on coming. Bo Yovo, Lulay Sorascho, Tefilla L’Ani kept things moving along. The energy in the room definitely went up several notches as MBD launched into Usid, a song we have all heard over and over again at weddings, but I promise you, I have never heard it sound as good as it did last night, especially with Mordechai Ben David dancing on stage, twelve inch payos flying as he whirled around. There was so much electricity in the room that everyone needed a break at this point in time, just to catch their breath. A perfect time for another Pomegranate video. This one featured an original Yossi Green song, entitled “The Contest” which detailed a contest to find the fruit that would best represent the upscale kosher supermarket which Brooklyn residents love so dearly. The song was quite original and unlike anything I have ever heard before. But fear not! Anyone who was at the concert can hear it over and over again, as we all received gift bags containing a CD of the song. I hear that there were also Americare sticky notes in the bag, but sadly, my bag didn’t have one.

Back to the music. MBD emerged back on stage, pulled up a stool and sat down as he sang a medley of classics: Hineni, I’d Rather Pray and Sing, Just One Shabbos and Happy Days. It is amazing to realize the breadth of work Mordechai Ben David has amassed over his amazing career. And yet, the hits just keep on coming.

For his next song, MBD invited his son Yeedle back on stage and in what I thought was the sweetest moment of the night, the band starts playing Shiru LaMelech. MBD puts his arm around his son and says “You know this one?” Yeedles says he thinks he can do it and his father replies “Just try to sing along”. It was a beautiful moment, a beautiful song and it was one of the highlights of what was truly an awesome concert.

At this point in time, I kept checking my watch, wondering how much longer this concert could possibly go on. It had been well over two hours, was so jam packed with musical goodness and yet, there didn’t seem to be an end in sight. Was anyone going to complain that there was too much good music packed into the night? I certainly wasn’t! MBD went on to his next songs: Maaminim, Efshar L’Takein, the incomparable Someday and finally the Chassidic-Rock smash hit from Kulam Ahuvim, Omar Rabbi Akiva, with the crowd singing “Avinu Shebashomayim” over and over again.

The last song of the evening, was the wildly popular Moshiach, with Flam, Kessin and Yeedle joining MBD on stage. This was truly an unbelievable concert and producers Ozer Babad and Chezky Zeiger put on a show that will likely go down in the books as one of the best concerts of 2009.

Here are some photos by Boruch Ezagui via JewishInsights.com. Read Yossi Zweig’s site for an additional review. 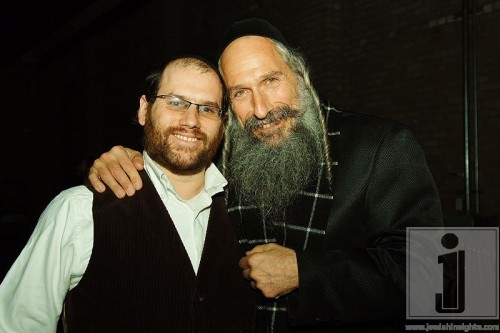 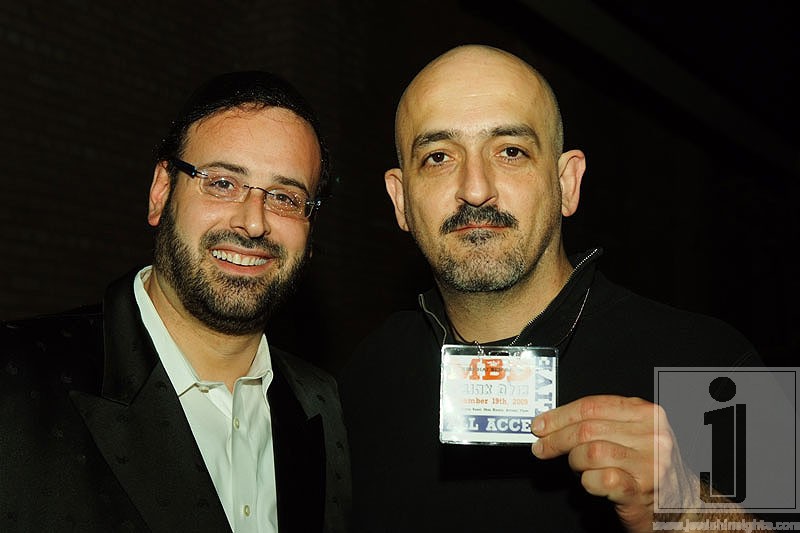 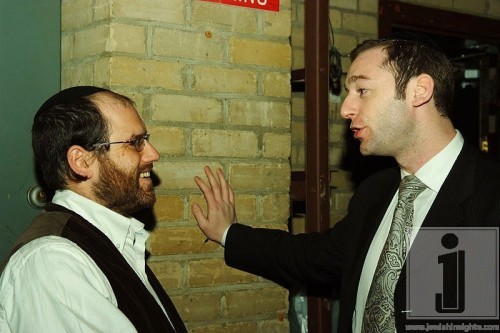 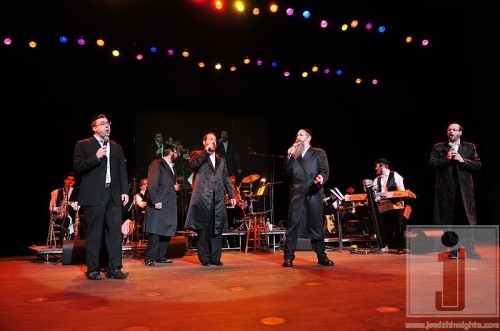 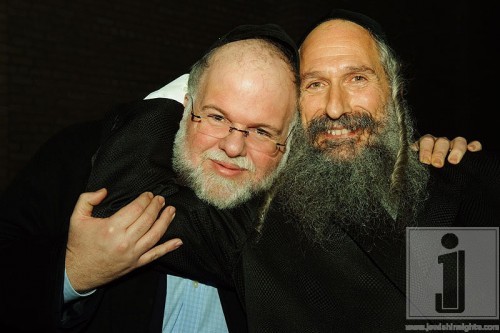 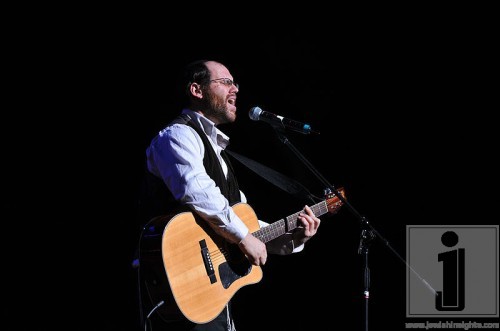 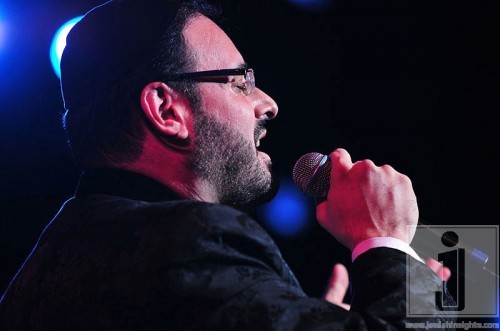 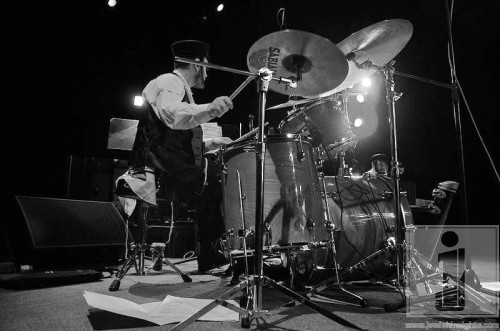 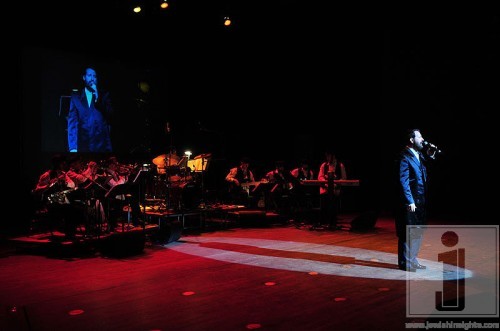 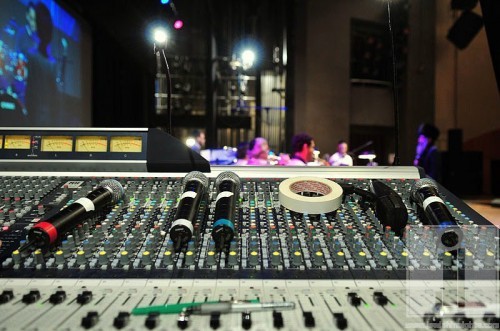 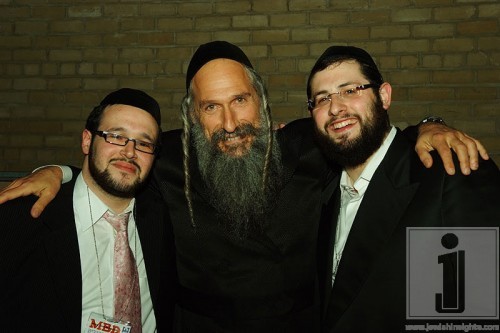 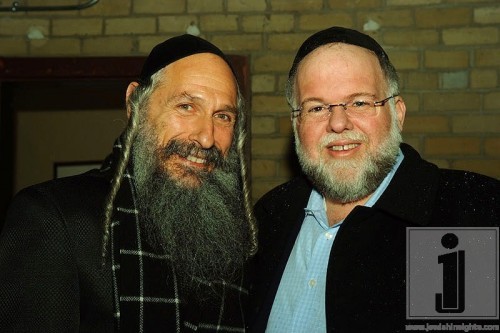