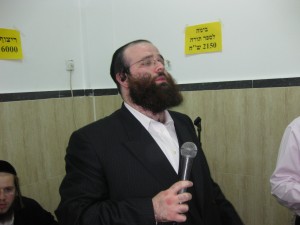 It’s hard to believe that it has been just three short months since Shloime’s debut album hit the stores here in the United States. In that short amount of time, he has become a household name, as Jewish music lovers can’t seem to get enough of him. His recent trip to Eretz Yisroel proved that Israelis from all walks of life love Shloime’s music just as much as we do.

This trip should have actually taken place weeks ago, but Shloime has been so busy with chasanas here in America, that it took time until a face to face meeting with Greentec, Shloime’s Israeli distributor, could finally be arranged. The trip was a huge success. While Israelis are familiar with Shloime’s music, they never got a chance to meet with Shloime, talk to him and get to know him. Until now. What a week it was!

Shloime singing at a wedding in Israel

Shloime met with virtually every Israeli radio station and music website. In his visit to the various Greentec locations, Shloime met so many people from all walks of life, who were so glad to get to meet him in person and get to know the man behind the music. Countless times, people walked into the stores where his CD was playing and bought his CD on the spot. Sefardim, Chassidim, Ashkenazim – no matter what their background, his music seems to resonate with everyone.

So many people wanted more details about Shloime’s trip — what follows is a day by day, play-by-play. Enjoy!

Monday, August 17th: Shloime arrives in Eretz Yisroel. You’d think after a long trip Shloime might want to relax, but that certainly didn’t happen. Shloime’s day was jam packed. It started with a meeting with Kobi Sela, who was responsible for all Shloime’s public relations in Israel. From there he moved onto an interview with Chasidi News. Shloime even did a YouTube video thanking Chasidi News for their time. Next up, a meeting with Shlomo from Greentec, Shloime’s Israeli distributor. No time for rest as Shloime traveled to Bnei Brak to sing at a wedding with Ruvi Banet’s eight piece band. Shloime’s golden voice made a beautiful simcha even more beautiful. To hear for yourself, check out the YouTube clip of Shloime singing Anavim and Sholom Aleichem at the wedding. After that, it was on to a meeting with Shua Fried, who arranged two of the songs on Shloime’s album. Shua had never seen Shloime sing live before and could not believe how Shloime managed to connect with the oilam on so many different levels. By four o’clock in the morning, it was time for Shloime to finally call it a day and get some well deserved rest.

Shloime Taussig together with Shlomo from Greentec

Shloime together with Kobi Sela

Shloime being interviewed by ChasidiNews.com

Shloime together with Ruvi Bannet

Shloime together with Shua Fried

Tuesday, August 18th: After a whirlwind day on Monday, Shloime deserved a little bit of a chance to breathe. That doesn’t mean to say he got a chance to relax: a phone interview with Dos Music, followed by another with Shlager. After that it was off to Greentec’s Yerushalyim location where he met with the workers and had a short interview with hareidim.co.il. Finally, Shloime topped his day with a small kumzitz on a Tel Aviv beach with Dudi Kalish. After that it was time to rest up for Wednesday’s big concert at Binyanei Hauma.

Shloime on a telephone interview

Shloime in Greentec in Yerushalayim

Shloime being interviewed by Haredim.co.il

Shloime Taussig together with Dudi Kalish at a small Kumzitz

Wednesday, August 19:The big day!! Shloime spent his morning in rehearsals where he had the opportunity to get to know a few of Israel’s best singers, who were equally happy to get to meet this rising American star! Approximately one thousand people came to Binyanei Hauma for a star studded concert, headlined by none other than Shloime. Other performers included Mendy Jeruffi, Itzik Eishel and Itzik Orlev, among many others. A few of the songs were featured live on both Israeli radio and online. And in case that wasn’t enough, Shloime also did another heartfelt kumzitz with Dudi Kalish at Kever Dovid. Over two hundred bochurim currently learning in Eretz Yisroel came to sing and be inspired.

Shloime going in to Binyanei Haumah

The Kumzitz at Kever Duvid

Thursday, August 20: Another visit to Greentec, this time at their Bnei Brak location. From there, Shloime went to do a radio interview with the Sefardi radio station, Radio Kol Beramah. It’s funny how Shloime’s music seems to touch people from all different walks of life. So many people commented that now that they’ve met Shloime, his music means even more to them. After that is was off to a Chanukas HaBayis at a Beis Medrash in Yerushalayim, where Shloime’s beautiful voice only enhanced the simcha of this momentous occasion.

Shloime singing at the Chanukas Habayis in Yerushalayim

Friday, August 21: Even Shloime needs a day to relax. After recording a podcast for ShlageRadio, Shloime travels to Bnei Brak, looking forward to a beautiful, inspiring Shabbos!

Shabbos Kodesh, August 22: Is there anything more meaningful than Shabbos in Bnei Brak? I’m sure the people in Bnei Brak were as inspired by Shloime as he was by them. Despite the late hour, Shloime managed to squeeze in another interview on Motzei Shabbos, this one with Radio Kol Chai.

Shloime Taussig together with Shai Kahan from Radio Kol Chai

Sunday, August 23: Shloime’s last full day in Eretz Yisroel started off when someone approached him after Shachris, saying they only wished that he had been the Ba’al Tefilla who davened Hallel on Rosh Chodesh. More interviews today and these were huge. The first was with Arutz Sheva, the Israeli national news network, which included recording a short music video. The second was with Radio Kol Yisrael, Israel’s biggest radio station. Hard to believe that in one short week Shloime covered just about every single major Israeli media outlet. Before heading to the airport, Shloime managed to fit in supper with Avi from Greentec.

Shloime with Avi from Greentec

Shloime Taussig leaving Israel after a hard but fulfilling week

Welcome back, Shloime. We can’t wait to see what’s coming next!