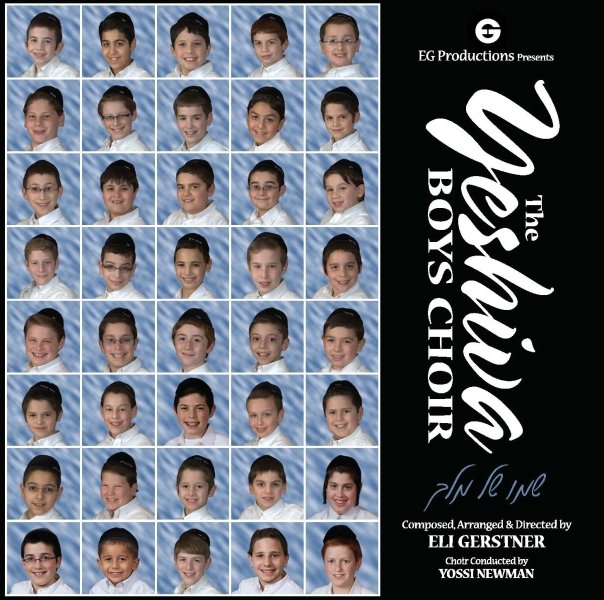 I know KolIsha already put out a fantastic review of YBC4 already, which can be seen HERE, but it’s always good to have a second opinion and that’s what I’m here for!

When I first saw the album art a couple months back, I was cracking up. It brought back memories of “The Brady Bunch”. A TV show I used to watch as a kid (TV? Nu, what’s a TV!?) Google it to find out why it reminds me of it. Otherwise, the album art is actually pretty cool.

This fourth album was delayed a couple of months for monetary reasons, as reported by Eli Gerstner. They felt it would be better to release it now when children are getting back from summer camp. So you can thank Gerstner for having your children run up to you yelling “Mommy! Mommy! There’s a new Yeshiva Boys Choir in stores! Let go buy it now!” But hey, it’s better for them to spend their time and your money on kosher music than with action figures or baseball cards (Though, they will probably ask for those too!). Don’t worry, the album was worth the wait. It is a solid album and will be playing on your iPod/CD player for the next month or so.

For those of you who follow my blog (jmderech.blogspot.com) you’d know that I just recently got married. So, I’d like to thank my wife for allowing me to write this review in the car on the way to my parents on a Friday afternoon instead of making conversation. Although, music can be a great conversation starter!

Note: I added a HOT, MILD & COLD meter for each song, which will tell you what I think of it in short. Enjoy! :)

Sh’moy – (HOT) No better way for YBC to start off their long awaited fourth album then with an electric solo in the beginning; “Shpitz Gerstner”. Tani Martin is the star of this song, as he is with almost any song he sings. His voice is in my opinion, the best all-around voice in the choir. Gerstner promised this song to be the next “Kol Hamispalel, V’ohafta, Shabichi” and he delivered. This song definitely out does V’ohafta and Shabichi. Kol Hamispalel is a little hard to beat. The only downside to the song is the ending. It’s a bit to abrupt for my taste.

Hamalach– (HOT)First off, I can’t possibly rave enough about this song. It’s for sure not your typical song with a “Yiddishe taam”, but it is a gorgeous composition, and in my opinion a masterpiece. I love how the song convinces you that it will be a slow song throughout but then switches to a faster tempo halfway through. Don’t try going to sleep to this Hamalach, it’s too good and will keep you awake for a long time after you turn it off! You’ll be laying in bed humming it while your wife asks you to “be quiet!” for the umpteenth time.

Atah Kidashta – (HOT)This is quite the catchy tune. The low part is similar to “Malachim” from YBC 1. You’ve got to love how the drums stop and go to the tempo of the lyrics in the beginning, which is followed by a beautiful duet. The choir harmony behind new soloist Aron Kogan (who has a terrific voice) is fantastic. The “Na na” solo brings me back to memories of Yehuda Leib Saks. It sounds very similar to the way he sang. All in all, this songs can be defined as a success.

Oz V’hadar – (MILD)This is the first time I’ve heard these lyrics to a song. Finally, a different part of Aishes Chayil used. In the words of my wife, “it’s a very calming and soothing song”. Towards the end of the song, the choir quickly switches off with a very cool sounding violin. And of course, the song ends with another “crazy high Gerstner key”.

Baruch Hashem – (COLD) My wife and I feel like this song could be a background to some video game. This song can be most compared to previous YBC songs like “Yiru & Milayim Ziv”. I’m not a fan of the song, but you may be! There’s just not much to the song besides crazy electric guitar.

Derech Sheker – (HOT)Adon Olam, Hadrichayni, Al Hakol. Why mention these? It’s another one of those relaxing Yossi Newman compositions that stands out on each album. The star of this song is Akiva Elbogen. I love it when they use him as a soloist instead of a crazy background harmony. However, there’s one down side to this song. The part of the song after Elbogen’s solo is completely pointless and has nothing to do with the song. However, it doesn’t ruin the song. And Yehuda Turner’s ending to the song is quite cute!

Torah Tziva – (COLD)Think Kel Hahodaos from YBC 3 when you hear this song, only not as good. It’s fast paced and has too many words crammed into one part. Usually they save this style song for the last one on the album. I call it the “flop of the album” on each YBC album. I was never a fan of any final song on the YBC albums, but if you read on, my view has changed with this album.

Min Hameitzar – (MILD)On every YBC album, Eli Gerstner is featured and this is his song of choice on this album and may I add, Eli Gerstner sounds great on this song. He doesn’t overdo his shtick and sounds as good as he did on his Henei album. This song has terrific arrangements and it’s done by none other than renown musician Yisroel Lamm. There’s a very somber tone to this song in the refrain, but in the chorus the tune switches to a more uplifting note.

Simcha – (MILD) Oh no! The creepy laughing song! Every time we reach the laughing part my wife makes me turn it off, so I have no idea what the rest of the song after that part sounds like. This song is about making you happy, but it doesn’t do that for us; it makes us scared! No, but jokes aside, it’s a fun song if you can ignore the laughing. It’s their new “Booraich/Koo Moo”. In other words, I can see the choir juggling and dressing up for this song. Just beware of the creepy laugh!!!

Kah Ribon – (HOT)This is by far the best “final song” among the 4 YBC albums. If you listen closely, it has similarities in common with Menucha Vesimcha from Menucha. The mix of soloists is perfect & how befitting for the star of the album, YM Gerstner to finish the album with a classic “Gerstner, belt it out” part.

Overall, this album is way better than YBC 3 and I can’t wait to hear these new songs in concert. Stop by you local Judaica store and pick up a copy if you can, because the Judaica store by me was sold out!