In Memory of Jo Amar 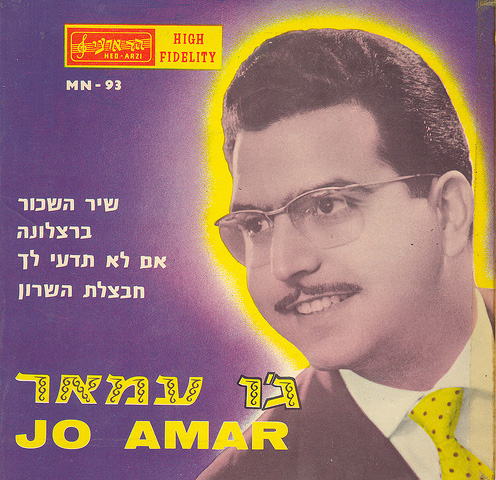 This past Friday the sad news came to us about the passing of a very well known Jewish Music Star, Jo Amar.

Although I am not old enough to have  grown up with Jo as one of my major Jewish Music Stars, he was still able to get his way into my life, and sure make me remember one of the biggest hits  “Barcelona”. Every once a while when me or my friends pulled up the oldies, Jo Amar was sure not to be missed, and he was always enjoyed very much. We all tried to sing along with his energetic songs, until it got too high, or we got out of breath :). His song “Shalom Leben Dodi” has come around many times at a Shabbos Table when there was a request for that song, it always added that warm touch to the meal.

Below is the Jpost article about Jo Amar’s Passing

Amar was an Israeli icon during the early years of the state, a favorite of the newly arrived Sephardic immigrants.

Amar immigrated to Israel in 1956. He pioneered the fusion of classical Jewish Sephardic and Arabic tunes with Western musical sensibilities, thereby helping give birth to the style labeled Mizrahi music today.

The lyrics usually discussed the personal and social angst and joys of Middle Eastern immigrants who sought to find a place in Israeli society. Amar was also a highly-regarded cantor.

The casket of Amar, who recently joined his children in the United States, was brought to Israel Saturday night. His funeral will take place Sunday afternoon at Yad Rambam, the moshav where he stayed on visits to Israel in recent years.

Amar made aliya in 1956, but later left Israel and divided his time between Europe and the United States. However, he continued to visit Israel to perform.

After the death of his wife Remond, Amar returned to Israel. He was wheelchair-bound after having suffered a stroke in 2000, and two years ago, suffered a second stroke, which worsened the condition of his Parkinson’s disease, from which he also suffered at a late age.”