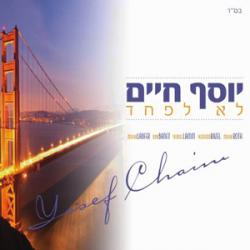 Let me tell you this right from the start. If you’re hoping to read some kind of comparison between Yaakov and Yosef Chaim Shwekey, you might as well stop reading right now. This review is about Yosef Chaim Shwekey and his debut CD, Lo Lefached. Despite the similarity between their voices, Yaakov Shwekey had nothing to do with this CD and I see no reason to mention him here.

If you really want to discuss Yosef Chaim Shwekey’s brother, we can talk about his brother Moshe Dovid, who composed five of the eleven songs on this album and penned the lyrics for a sixth. Makes you wonder if there are any other Shwekey brothers out there, waiting in the wings for their chance to dazzle us.

But this review is about Yosef Chaim Shwekey. There’s no doubt he has a good voice and is a talented singer. While this album is not a contender for album of the year, it clearly showcases Shwekey’s vocal abilities. I think his song selection needed work, perhaps because he took so many songs from the same composer. Using a variety of composers would have made this album more well rounded. No question this guy would make a terrific wedding singer. No matter what route he decides to pursue, I look forward to hearing more from him in the future.

So much has been written about the cover to this album. Was leaving his last name off a good move? While I understand why he didn’t use the Shwekey name, if I were producing this album, I would have done it differently. As for the last minute change to the album cover, check out: Jewish Music Derech, Life of Rubin, The Cool Jew.com, Jewish Music Review and Jewish Blogmeister.

Ok, time to get down to business.

Emes – This great opening song, composed and arranged by Moshe Laufer, gets the album off to a terrific start. Shwekey sounds great, the song is catchy and the choir is well done. This solid song leaves you with high expectations for the rest of the album. It is without a doubt my favorite fast song on the album.

Hashleich – this slow song is the first of five songs composed by yet another Shwekey brother, Moshe Dovid. The lyrics, like many others on this CD are a good choice: a little off the beaten path, but not so much so that you can’t figure out what they are. Nicely arranged by Yonatan Razel.

Lo Lefached – This upbeat tune was composed by Mendy Werzberger, Yitzy Schwartz and Moshe Dovid Shwekey, with arrangements by Ruvi Banet. I’m not quite sure why this song was chosen to be the title track. If they wanted a fast song for the title track, I think Emes would have been a stronger choice.

Torasi – Pretty slow song, composed by Yitzchok Rubin with beautiful arrangements by Moshe Laufer. All the vocals on this song are solid. Aside from Shwekey’s, child soloist Yehuda Mendlowitz does a terrific job as does Moishe Roth’s choir. I’m not convinced that the third part that comes in from about 4:17 – 4:47 was really necessary. Again, great choice of lyrics which echo the mood of the song nicely.

Song of Our Travels/Ani Maamin – Ani Maamin is actually the last song on the CD but since it’s just a Hebrew version of Song of Our Travels., it made sense to discuss them together. The song concept is a solid: no matter what tragedies have befallen our nation, we have always managed to find the strength to sing the words “Ani Maamin.” But as someone whose family was decimated by World War II, I take umbrage when people drop lyrics like “train” and “siren” into a song and assume people will automatically be moved or inspired because they used the magic words. Given that I can’t be objective about this song, I can’t possibly review it.

Biglal Avos – The first few seconds of this song made me think someone had switched the CD for Dovid Gabay’s Hagomel. This leibidic, upbeat song is another contribution by Moshe Dovid Shwekey. I’m sure Mama Shwekey is shepping lots of nachas.

Margoa – This pretty slow song is probably the strongest song Moshe Dovid Shwekey contributed to this album. Yisroel Lamm’s arrangements give this song a distinctly different flavor than the others. Loved the introduction and this song definitely gives Yosef Chaim a chance to shine. Am I the only one who had to look up the word “margoa” to see what it meant?

Eilecha – This upbeat song is one of Moshe Dovid Shwekey’s better songs with arrangements by Moshe Laufer. Shwekey sounds great and the song is pretty catchy.

Yerushalayim – Someone want to tell me why this song got buried at the end of this album? This hartzig song, composed and arranged by Moshe Laufer is hands down the best song on the album and quite possibly the only song on this album that we may still be hearing in six months. Everything about this song works and I love it. I would have given the song a different name, bumped it up to song number three and made it the title track.

Chaveirim – Another upbeat tune, composed by Moshe Dovid Shwekey with arrangements by Moishe Roth. Oddly enough, while the most of this album has songs that are bursting with innovative lyrics, this one just seems like it doesn’t have enough words in it.